There Is No Room for Terrorism in Islam 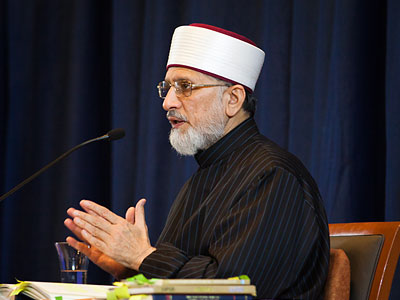 Muslims living in the West should remain true to their faith and culture while integrating with Western society, he added in an address broadcast in an estimated 90 countries.

“Any act against kindness, benevolence, mercy or compassion cannot be perceived as an Islamic action. That is totally outside the boundaries of Islam,” Dr. Qadri told an audience of more than 600 in Hammerschmidt Memorial Chapel. The two-hour lecture was attended by prominent Muslim Chicago-area leaders, who interrupted with spontaneous chants of approval.

He opened his speech in a quiet, deliberate tone, noting that the word Islam is derived from words that mean “peace” and that all religions share common values such as peace, love, justice and humanity. “We need to promote them as the true teachings of every religion,” he added.

Dr. Qadri ended his remarks in fiery fashion, emphasizing that the laws of Islam do not allow acts of terrorism or suicide against non-combatants even in declared wars, and concluded by saying, “We have to establish a global society of peaceful coexistence, and Muslims should practice Islam in its true spirit.”

Dr. Qadri, who has published 475 books and scholarly works, carries the title of Shaykh-ul-Islam, given to those regarded as authorities on Islam. He is the founder of Minhaj University in his native Pakistan and Minhaj ul-Quran International, an educational, spiritual and humanitarian organization with branches in more than 90 countries. He now lives in Canada.

His international fame escalated with the 2010 release of his Fatwa on Terrorism and Suicide Bombings (a fatwa is a scholarly opinion on Islamic law by a recognized authority) as a “total condemnation of any act of terrorism, without exception.”

A more informed view of Islam

In his speech, Dr. Qadri had harsh words for Muslim extremists, whom he accused of twisting the Quran to justify crimes against humanity. He also criticized Western countries, who he said have fanned fears of Muslims by incorrectly defining the term jihad as meaning “holy war.”

Jihad, he said, means “a struggle for a good cause,” such as improving education, combating hunger or elevating one’s own spirituality. Nothing in the Quran, he added, calls for jihad as a holy war or justifies killing except in self defense during war.

Dr. Qadri urged Muslims living in Western countries to become fully integrated with those societies instead of isolating themselves, as many did in the U.S. in the wake of the 9/11 attacks. In many Western countries, including the U.S., Muslims are allowed to practice their religion and culture without interference. They also enjoy greater personal freedom and political rights than in their native countries, he added, and they should take advantage of those freedoms.

Before his speech, Dr. Qadri met with honors students in the Frick Center and said his 512-page fatwa was structured as a point-by-point rebuttal of arguments by Islamic extremists because “simple condemnation of terrorist acts and extremism” by Muslim leaders had done little to prevent young, impressionable Muslims from supporting groups such as Al-Qaeda and the Taliban.

“With this type of document you need an elaborate scientific, juristic and academic rebuttal that is based on Islamic law and interpretations by great Muslim authorities,” said Dr. Qadri, who also was a professor of Islamic and civil law in Pakistan.

Despite criticism of his fatwa and death threats from radical Muslims, he said no one has refuted his conclusions.

“Not a single book or even a small booklet has been produced as an academic rebuttal by theologians of extremist theory,” he said.

Based on messages he has received through e-mail, blogs, online forums and other communication channels, Dr. Qadri said “thousands of (Muslim) youth have repented” because of the fatwa and adopted a more informed view of Islam and more reasoned attitudes toward the West.

“Islam is a religion of peace and tolerance, and they were being given a wrong interpretation of the Quran,” he said. “With the fatwa, thousands have changed their thinking—not those who were already brainwashed, but those who were on their way to radicalization.”

The 9/11 attacks portrayed Islam to some as a violent, vengeful religion, but Dr. Qadri said those who perpetrated the attacks were enemies of Islam, humanity and every religion.

“All religions are unanimous in supporting peace, love and mercy,” he said. “No religion can tolerate acts of aggression, militancy or injustice, because then it ceases to be a religion.”