The Miracle of the Mawlid 2012

The annual Minhaj-ul-Quran Mawlid Conference is always a spectacular event with thousands of people gathering together to celebrate the night when Allah the Most Compassionate saw fit to send His beloved Prophet (saw) to humankind and spread the beacon of light into a mire of darkness and ignorance.

However 2012 proved to be an unforgettable experience - for those who were lucky enough to be there and for those who had to content themselves and watch live through www.minahj.tv and QTV. Thousands upon thousands of men women and children gathered at Minar-e-Pakistan in the early evening of the 4th February. Busses lined the streets outside the grounds with red, white and green banners draping the sides, carrying people from the length and breadth of Pakistan. Many of the busses carried passengers not only inside but on the roof tops to allow as many people as possible to come to this glorious event. Rickshaws trembling under the weight of mothers and fathers balancing their children and relatives on their laps whizzed past onlookers weaving in-between busses and cars finding safe places for their customers to embark. Streams of youngsters clutching flags and placards hustled and jostled their way through the crowds eager to find places as near to the stage as possible. The young and old, rich and poor and from every class knew that if there was a night to come out and rejoice - a night to endure the cold and rain this was the night to do so. For this was the night that marked the coming of the greatest man in history - the man that changed the destiny of billions of people; the man that gave hope and courage to the powerless and oppressed; the man that gave rights and compassion to those most in need. 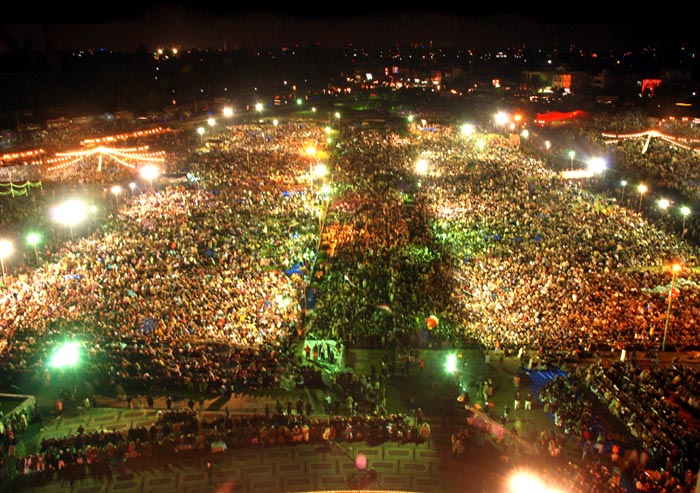 As the gathering increased the Minhaj-ul-Qur'an workers made fervent prayers - holding their hands up to the skies imploring Allah (swt) not to send the rain. If the rain came during this freezing weather who would remain and continue with the celebrations? How could people be expected to sit on the floor and continue to rejoice and take part in the festivities if the skies were to open with rain? But Allah Almighty had a different Will that night. HE wished to show the world and test those present the feelings of the people present. When the skies opened and the rain began to fall, first soft dew drops and then suddenly a massive downpour who would remain and who would go?

As the rain fell, the T.V screens showed the howling wind and the makeshift covers and umbrellas swaying in the wind. Most of the people in Pakistan are not equipped to deal with such conditions and so as the rain fell, the common people in their normal shalwar kameez and woven blankets found no barrier to the descending water. As the drains became blocked and water began to fill the ground even if one found some solace in a covering this proved to be nothing as rivers of water flowed on the ground swelling up slowly.

So it was amazing to see the strength of character, patience and tolerance shown this year by the workers of Minhaj-ul-Qur'an and those who attended the Mawlid Conference. Despite the rain and bitter cold - despite the howling wind and terrible conditions thousands upon thousands of people kept coming in their droves to show their love and attachment to the Holy Prophet (saw). Allah Almighty may have been testing them; to see strength of their affection and loyalty to the deen and its beloved prophet (saw) - and surely that night Allah Almighty must have been pleased to see His people huddled together just to listen to the nasheeds in the praise of His beloved prophet (saw) and of course to listen to the electrifying speech of Sayyidi Shaykh-ul-Islam

Watching the crowds of people sitting patiently with smiles etched on their faces, one can only imagine, sitting in the comfort of our warm homes with hot food and drinks the conditions that these people endured on this blessed night and subhanallah how lucky they are to have had the patience and strength of imaan and to stay and take part in the celebrations. 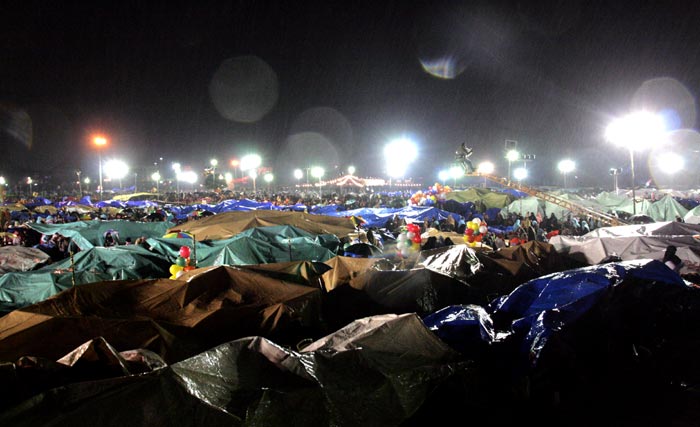 I felt truly humbled and awe inspired at the dedication of all those present. So many of them are faced with difficult lives suffering from very low incomes and rising costs in food and housing. The general standards of living have dropped dramatically in the last few years with no job security or any financial assistance from governmental sources. Coupled with the constant threat of terrorist attacks and suicide bombings it takes very strong individuals with deep rooted motivation to leave the comfort of their homes and attend an event such as this. In essence this is both a reflection of the passions of all those present and the strength and organization of all the Minhaj-ul-Qur'an workers involved.

Moreover the participation of women is always a much harder target to achieve since they are often reliant upon their male counterparts to help them travel in Pakistan as well as be the main responsible parent for child care arrangements. Yet despite facing much tougher obstacles it was truly a delight to witness the sea of sisters - thousands upon thousands crowded together - on chairs and seated on the floor huddling together to gather as much warmth as possible. Much of their participation is due to the extraordinary efforts of Minhaj-ul-Qur'an Women League and the sisters wing of the Mustafvi Students Movement (MSM) who work all year around, tirelessly in their efforts to motivate sisters to attend programs and events and work for the propagation of Islam. 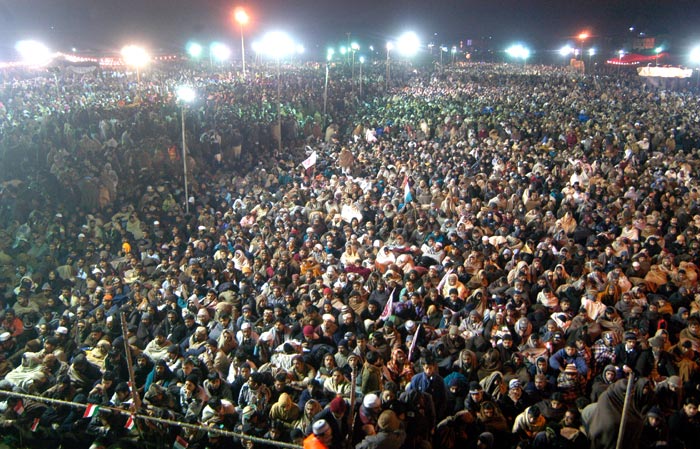 As the night progressed and the masses of people kept arriving until the ground was an ocean of people, Allah Almighty then allowed the clouds to disperse and the rain to stop as Sayyidi Shaykh-ul-Islam's lecture began and the rain by the Will of Allah (swt) remained away up until the salaam and closing dua.

Of course the climax of the event was always going to be the key note speech of his eminence Sayyidi Shaykh-ul-Islam Dr Muhammad Tahir-ul-Qadri. Many of those who attended came just to see and listen to his pearls of wisdom and what a charismatic lecture he gave - on why the Holy Prophet (saw) is the Sultan of Sultan's, the highest in status of all the Ambiya that have been sent and indeed the highest of creation that has ever been created and will be created till the end of time. In his beautifully eloquent style Sayyidi Shaykh-ul-Islam elaborated from the Holy Quran and Books of Hadith that there is no doubt that the Holy Prophet (saw) is to be revered and venerated due to his exalted status. This is a speech that should be watched again and again to refresh our imaan and remind us of how precious our beloved prophet (saw) is and how he should be treated with the utmost reverence and respect.

This year's Mawlid conference was indeed a miracle to behold and may Allah Almighty accept all of the hard work and efforts of the Minhaj-ul-Qura'n workers and organizers and all those who attended and watched this blessed event. 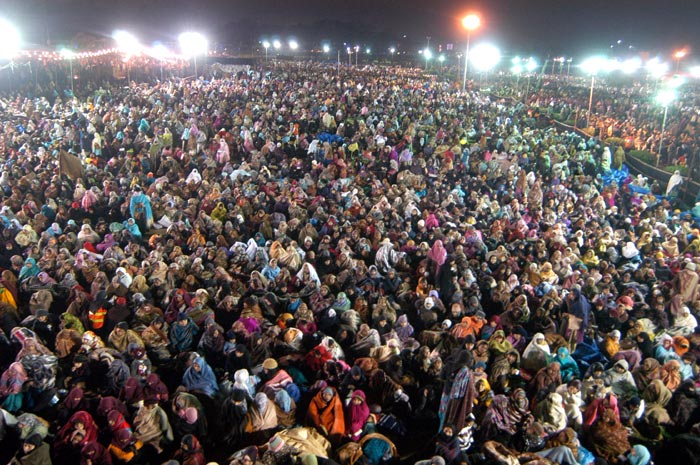