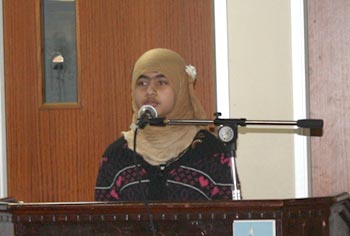 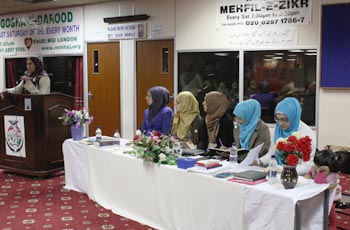 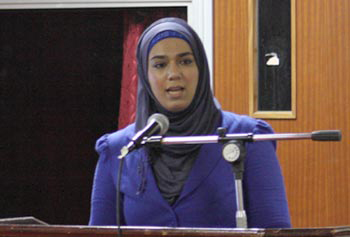 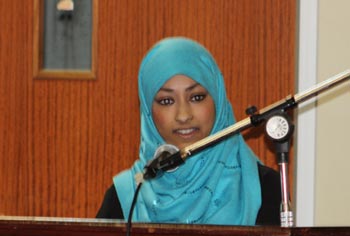 Jabeen welcomed everybody to the event and thanked them for attending. Mrs Zarida Shafiq, President of Minhaj-ul-Quran Women’s League London, was also present. Jabeen invited Mariam Hussain to commence the event with Tilawat of the Quran. After a beautiful recitation by Mariam it was brought to everybody’s attention that her grandfather had passed away that morning and thus a prayer was made for him.  It was great to see such dedication from a young sister that despite, such bereavement, she had come to fulfil what she had committed herself to. May Allah Almighty bless her grandfather with a high station in heaven through the intermediation of our beloved Prophet (PBUH) and may He bestow her and her family with patience, Ameen. The Tilawat was followed by two Nasheeds from Anisah Arif and Anisah Tanveer. 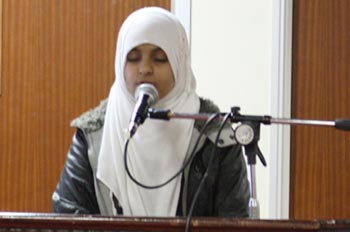 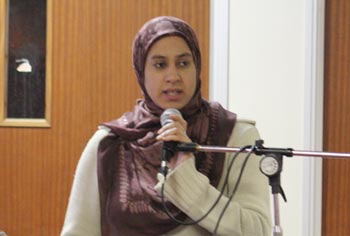 After completing the introduction of the executive and the participants, Jabeen went on to explain what MYLUK-S is about and what its aims and objectives are. She stated that one of the aims and objectives of MYLUK-S is to help in welfare initiatives and that sister Mariam Khalid was one sister to participate in such initiatives by doing a skydive and climbing Mount Kilimanjaro. She explained that the success of MYLUK-S is all due to teamwork. Jabeen then invited sister Ambreen to the stage to shed some light on what MYLUK-S had been doing since 2008. Ambreen started off by mentioning the projects and initiatives that MYLUK-S had arranged and had played a big part in. She stated that MYLUK-S gives young girls the education so they can defend themselves when scrutinised in society. She also made everybody aware that MYLUK-S works solely for the pleasure of Allah Almighty and His beloved Messenger (PBUH) and that is its driving force. 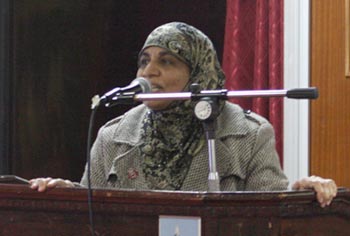 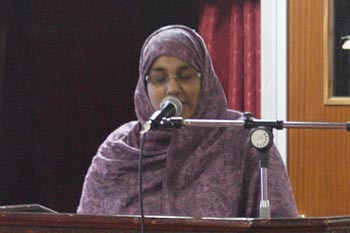 Jabeen made the participants aware that the event was being filmed for training purposes only and that although it had been focussed on the executive as we were going to have a group discussion it would include them as well. Jabeen then advised the participants that they will be split into groups for the discussion and that it will be led by an executive. They were asked what they think that MYLUK-S should undertake as projects whether on a national or a local level. The participants enthusiastically shared their ideas. All the ideas were noted down by the executives with the promise to review the feasibility of each idea and to insha’Allah implement any viable ideas in the near future. After the interactive session, Jabeen invited Fathema to talk about finance. Fathema stated that finance was crucial for the survival of anything in this world, whether that is an organization, country, family and so on. She explained that if money came into any organization and it did not meet the expenditures, it can cause an organization to collapse. This is the reason why MYLUK-S prefers continuous payments, in the form of standing orders, rather than one off donations. She encouraged the participants to join the £1 scheme as it is a form of sadqah jariyah for them. 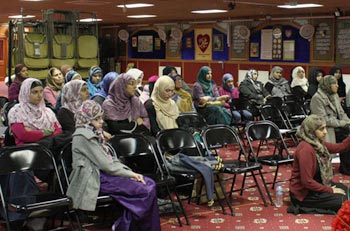 Following Fathema, Marinah took to the stage to explain about PR. She stated that the Muslim youths need to take responsibility to present the positive image of Islam and MYL-S aims to do that through its PR. She showed statistics of MYL-Sisters Facebook and Twitter to explain how far the message of MYL-S was reaching. She also explained that MYL-S is MUSLIM Youth League, not Sunni, Shia or Hijabi League and therefore, everybody is welcome to become a part of it. Jabeen then invited Somia to speak about role of Human Resource. Somia spoke about the fact that it is imperative that MYL-S has all the up to date details of the members as this ensures we can send them details of the latest activities and events. She also mentioned that it was great to hear from them, whether it was a compliment or constructive criticism, as she had many sisters appreciating the new MYL-S phone that had been put in place. Somia stated that MYL-S not only benefits by the work that you do for the organization but helps you develop as well and she gave the example that her IT skills had improved a lot since she started her role in HR.

Jabeen then invited Sweba for the final session of the day. Sweba spoke about da’wah but focused mainly on the concept of working collectively. She made the audience aware that the theme of collective work was prevalent throughout the history of Islam; when the holy Prophet (PBUH) started to preach, he initially made a team of Companions and then went to preach openly after that. She stated that the holy Prophet (PBUH) did not need to have people to help him as whatever he wanted would have happened. However, he wanted to set the Sunna for us so that we would realize the importance of working collectively. She finished the speech by saying that everything that MYL-S had achieved to date was solely through the blessings of the holy Prophet (PBUH). Anbreen Hussain was then given time to say a few words and she thanked the executive and also made the participants aware of the local activities that were taking place. To finish off the session, Jabeen invited Mrs Zarida Shafiq to make prayer. Mrs Zarida Shafiq thanked the executive for such a great event and said that her heart was at peace that the future of this great organization was in capable hands. She then prayed for the success of MYLUK-S and all forums of Minhaj-ul-Quran International. MYL-S executive would like to extend their gratitude to Ambreen Hussain and her team for organizing the event and providing the delicious refreshments. If you would like to support the projects of MYL UK Sisters, please set up a standing order of just £1 to the following account: