Islam is a religion of peace as exemplified by its founder, Islamic scholar says 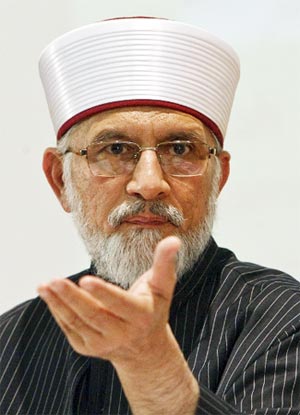 Islam is a religion of peace, tolerance and thirst for knowledge made manifest by the life and practices of its founding prophet, said Muslim scholar Muhammad Tahir ul Qadri.

Non-Muslims may not know this if they rely on short media accounts about Islam, Qadri said. But if Muslims who commit acts of terrorism do not know this, it is because they have not studied their own religion thoroughly and carefully enough.

"Many people today don’t know much about the religion even they belong to. How many Christians, for example, can tell us the number of books in both the Old and New Testaments?" he asked.

Qadri’s two-hour lecture, "Islam and Peace," delivered Saturday afternoon at the University of Utah’s Orson Spencer Hall auditorium, was itself thorough and careful.

Born and educated in Pakistan, but now living in Canada, the renowned scholar quoted at length both the Quran and hadith, or teachings of Muhammad, to back up every point and assertion.

" ‘Religion is easy, and no one overburdens himself in his religion but he will be unable to continue in that way. So do not be extremists,’ " Qadri said, quoting a hadith attributed to Muhammad. "This is not a speech given after 9/11. The Prophet Muhammad delivered these words to mankind centuries before."

Qadri became internationally known in 2010, the year he wrote a 600-page religious ruling, or fatwa, condemning terrorism and suicide bombing. In addition to appearances on CNN, BBC News and Al Jazeera, Qadri spoke at last year’s World Economic Forum in Davos, Switzerland, and was hosted by the United States Institute of Peace. Educated at a Catholic mission school as a child, Qadri started his religious education at age 12, earning a doctorate in law from the University of Punjab in Lahore, Pakistan. 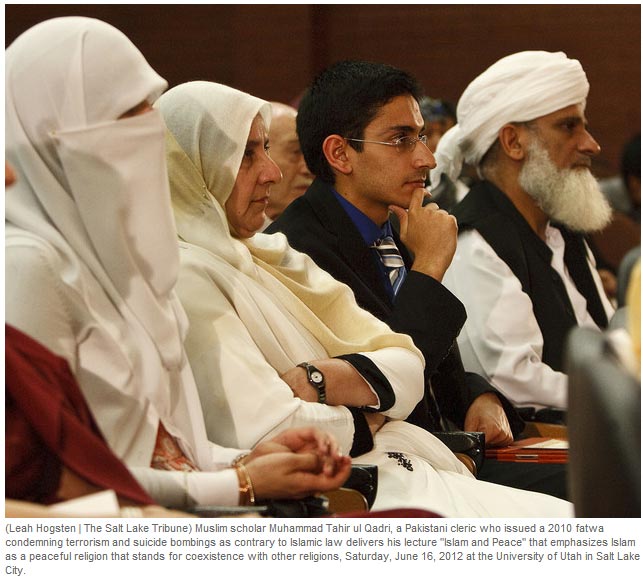 His Saturday appearance was sponsored by the Al-Mustafa Foundation of Utah, the Salt Lake Interfaith Roundtable and the Peace and Integration Council of North America. Qadri spoke to many curious non-Muslims and scores of Utah Muslims glad to hear their faith portrayed accurately by a respected figure.

Qadri was introduced by Alan Bachman, assistant attorney general at the Utah Attorney General’s Office and chair of the Salt Lake Interfaith Roundtable. Bachman chided Qadri gently for the length of his 600-page religious ruling — "That might come from the lawyer in him" — but admonished the audience to take the scholar’s message to heart. Bachman said he invited a friend to Qadri’s lecture who declined because a friend was too afraid to attend with her.