The Center of Interreligious Dialogue in Berlin celebrated its ten years of engagement for interfaith harmony and peaceful coexistence with the cooperation of different Muslim, Christian, Jewish and Buddhist organizations. The event was attended by a large number of people, religious and political personalities including Mr. Frederic Verryeken, Mr. Carsten Voigt, Mr. Oezisik and Mr. Breitkreuz-Hamm. 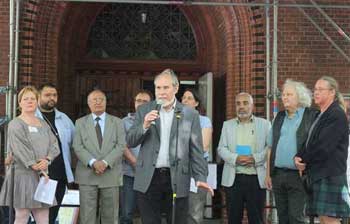 Mr. Mohammad Irshad, General Secretary MQI Berlin informed the audience that Minhaj-ul-Quran International under the patronage of Shaykh-ul-Islam Dr. Tahir-ul-Qadri is the world largest non-governmental educational, social and spiritual organization. Its main objectives are to re-establish our contacts with Allah (SWT), reawaken our relationship with holy Prophet Muhammad (SAW) and the holy Quran. He said that MQI deploys its resources in education, welfare and human rights. It engages actively in interreligious dialogue amongst different faiths, promotes peaceful coexistence, love, tolerance and harmony in the world. He further added that since the existence of MQI Berlin, it is following the guidelines of Shaykh-ul-Islam Dr. Muhammad Tahir-ul-Qadri to contribute these objectives. Minhaj Youth League Berlin presented Naat with Duff. The organizers expressed satisfaction at the successful completion of this event.