Minhaj-ul-Quran International (Lahore chapter) held a demonstration in front of Lahore Press Club to protest the massacre of Muslim Rohingya community in Myanmar (Burma) on August 2, 2012 in which hundreds of people participated. The demonstration was led by G.M. Malik, naib Nazim-e-Ala of MQI and Irshad Ahmad Tahir, Amir of MQI Lahore. The protestors were carrying placards with anti-killings slogans written on them.

The protestors demanded of the United Nations, Organization of Islamic Cooperation, international global organizations and the world media to take note of the worst human rights violations in Myanmar and take effective measures to put an end to this killing spree. 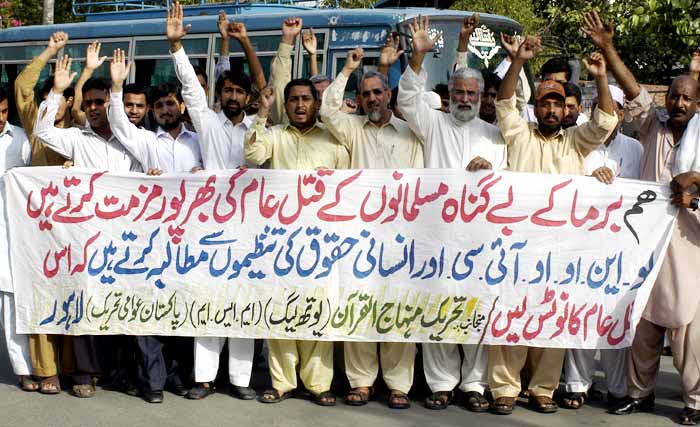 Addressing the audience, G.M. Malik said that Minhaj-ul-Quran International condemned the massacre and extermination of the Muslim community under the patronage of the state security forces. He said that even children and women were not being spared in the lust for shedding blood.

G.M. Malik said that silence of the UN, OIC and rights organizations over the gross human rights violation and massacre of thousands of people had raised question marks and left many questions to be answered. He made it clear that unless the world shunned double standards and policies of double-speak, the dream of durable peace would not be fulfilled. The UN should wake up to its responsibilities as a world watch-dog body and immediately send its peace keeping forces to restore law and order there, he added.

Baber Ali Chaudhry, President of Minhaj-ul-Quran Youth League, said that it was duty of the Muslim governments to take steps on emergency basis to rein in this killing spree. Unless the Muslims woke up from their slumber and did something concrete on the ground, this mayhem would not end, he added.

MYL President said that they should not hesitate to break their diplomatic relations with Myanmar if it did not stop the killing of the Muslim community there. He also questioned the conduct of the UN, adding that its silence over the matter was the biggest danger to the world peace.

Irshad Tahir said that the way blood was being shed in Myanmar was one of the most deplorable and reprehensible incidents in the world history. He said that the entire humanity was worried over the shedding of innocent blood and the sentiments of the Muslims around the world were grievously hurt. He demanded of the UN to step in without further loss of time and take measures to protect the lives of the Muslims in Myanmar. He also asked the OIC to convene an emergency meeting in this regard. He said that continuation of the oppression and gross human rights violations were a slap on the face of humanity.