By Daud Khattak and Charles Recknagel 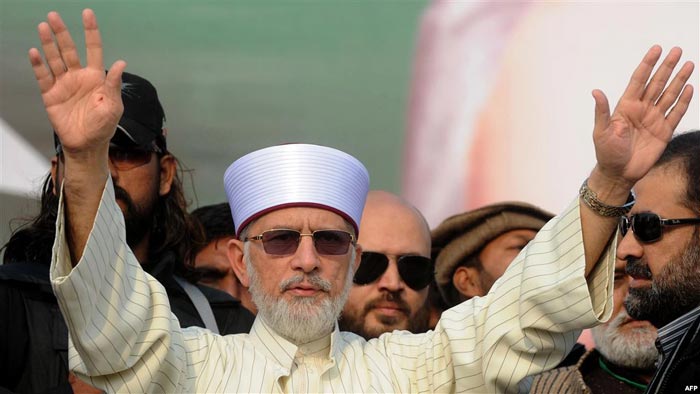 Muhammad Tahir-ul-Qadri is best known internationally for fatwa that he issued in 2010 condemning terrorism.

The influential Islamic scholar declared in that 600-page religious ruling that no Muslim has the right to shed the blood of civilians in the name of religion.

Now Qadri is becoming known both inside and outside Pakistan for something else: He has vowed to bring millions of supporters out into the streets for a march on Islamabad on January 14.

This time, his message is not religious but political. "If you want change," he told supporters in Lahore on December 23, "I am also here to bring the change."

Qadri is demanding a total overhaul of the government ahead of the country's parliamentary elections, due to take place after the legislature ends its current term in March. A precise date for the voting has not been set.

Qadri -- who is a law professor and founder of a worldwide organization that promotes education in the Islamic sciences -- wants Pakistan's ruling coalition to step down in favor of a caretaker administration that would be acceptable to all of the country's political parties, its judiciary, and its military. And he has called for such a caretaker administration to carry out election reforms he says are needed to ensure the upcoming vote will be honest.

To ensure the current government listens, Qadri has given it until January 10 to meet his demands. If it does not, he has promised, the march will begin from Lahore on January 13 and reach the capital the next day.

The government has so far refused Qadri's demand for a meeting with the prime minister and cabinet to discuss his terms. But Interior Minister Rehman Malik visited Qadri on January 7 to discuss security arrangements for the march.

FROM THE ARCHIVE: A 2010 Interview With Qadri By RFE/RL

Islamabad's superintendent of police, Mirwais Imtiaz, told RFE/RL's Radio Mashaal that protesters will be barred from a "red zone" that includes the main government buildings.

"We will provide security. Although the organizers have said the procession will be peaceful, we will deploy police to avoid any incidents," Imtiaz said. "No one may cross the red zone. There will be checks at walk-through gates, and there will be separate parking arrangements for participants of the procession."

Imtiaz said the red zone would be cordoned off with containers and barbed wire. He also said that 4,000 to 5,000 police personnel will be deployed in Islamabad to ensure security.

How many people Qadri actually can bring to the streets is now the question that dominates Pakistani media.

Omar Cheema of the Islamabad-based Center of Investigative Reporting in Pakistan says Qadri has a highly motivated support base among his former students. "The people who are aligned with him, these are the guys, most of them, who have graduated from his institution called Minhaj-ul-Quran," Cheema says. "So he has that kind of following."

Minhaj-ul-Quran International is a Sufism-based organization that Qadri founded in 1981. The group's declared aim is to promote a moderate vision of Islam and the establishment of good relations and understanding between communities and religions.

Qadri has also been a professor of law at the University of Punjab, where he taught British, U.S., and Islamic constitutional law for many years.

But if Qadri's dual role as a religious and educational figure helps make him a credible critic of Pakistan's troubled political system to some people, his own dabbling in politics makes him a suspect figure to others.

He founded his own political party, Pakistan Awami Tehrik, in 1989 and ran for a seat in the National Assembly in 2002. His party, which did not enter the last parliamentary race in 2008, is widely seen as having a one-man leadership with no other well-known figures apart from Qadri himself.

Qadri spent the past seven years in Canada and largely out of the Pakistani public eye. Now, with his pledge to lead a millions-strong march on Islamabad, he has not only returned to Pakistani politics but seized a place at center stage.