Dr Muhammad Tahir-ul-Qadri’s emergency address to people at 08:26pm (less than one hour ago). 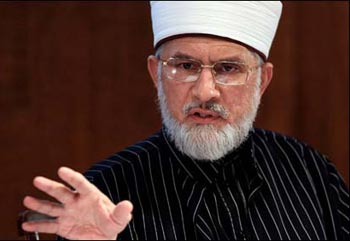 Now I want to explain two or three important points regarding the happenings of the last night. The cowards of law enforcement agencies tonight again plan to stage an attack, like the one they did in the morning.

Last night we reached in Islamabad at around 0215am in the meeting place. Rehman Malik backed out of his word as where the gathering would take place. First he committed he place of D-Chowk and then he said he didn’t.

So people went to D-Chowk – the place where the gathering was supposed to take place.

In the morning, Rehman Malik sent bearded people who resorted to gunfire and then shell firing. Thus they dispersed the gathering largely. They, then, tried to abduct Dr Qadri. They took control of the steering wheel of the vehicle. The two security guards of Huzoor Shaykh-ul-Islam entered the front seat and fought the members of law enforcement agencies hand to hand. The security guards of Huzoor Shaykh-ul-Islam broke the handle of the wheel, so the would-be abductors realized they would be unable to carry out their mission – the vehicle would not move. Also, outside the female participants of the sit-in made a chain of hands and protected the life of Dr Qadri. Then the would-be abductors escaped firing in the air.

They have not given even a single security guard to Dr Qadri and the participants of the million march man.

Be warned, according to Dr Qadri’s reports, they again tonight are returning in much more numbers. They will tear gas the people, use water cannons and fire in the air. And they want to abduct and/or kill Dr Qadri.