The Spiritual Retreat: An Educational and Spiritual Youth Camp

A 3-day getaway attracts youth from all parts of the UK to attend a ‘Spiritual Retreat’, a camp organised by Muslim Youth League UK. The retreat took place earlier last month from the 5th till 7th of April, at Minhaj ul Quran’s Walsall branch. Through various group activities, seminars and workshops, the 3-day retreat was designed to revive the teachings of Islam amongst Muslim youth. 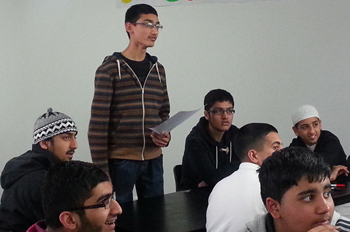 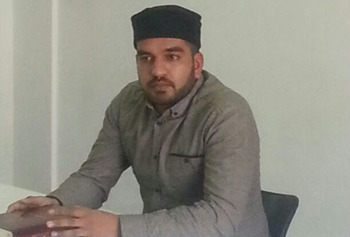 With the British Muslim community growing by almost 50% each decade, an issue of concern for the Muslim community is that mosques are unable to cater for the needs of the Muslim youth. Only a handful of mosques deliver weekly Jummah sermons in English, evening classes teach the recitation of Quran but very few emphasize its meaning and rarely do we find mosques that teach youth the basic Islamic etiquettes. Such issues have resulted in Muslim youth becoming increasingly detached from their religion. Muslim Youth League through its nationwide Spiritual Retreats aims to revive the love and respect of the Holy Prophet (saw), knowledge of deen and spirituality. 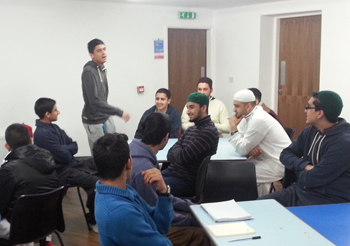 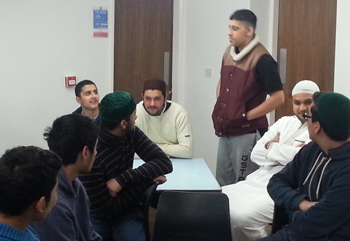 The retreat began with some refreshments on the arrival of participants and a welcome address by Ustadh Qasim Rauf, a student of Shaykh ul Islam Dr Tahir ul Qadri and an active youth worker. Ustadh Qasim delivered a short talk on the etiquettes of a collective spiritual retreat and the necessary intentions. Shortly after dinner and Salat-ul-Isha, Shaykh Rehan Ahmad Raza Al-Azhari, president of Muslim Youth League UK and Glasgow-born scholar who has studied Islamic sciences in Egypt, Syria and Pakistan delivered a talk on revivalism in light of the Quran and Sunnah.The day ended with a Q&A session addressed by Shaykh Rehan. 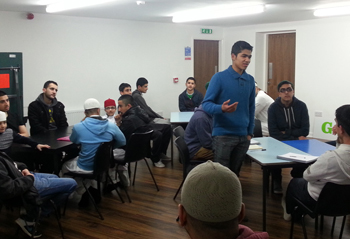 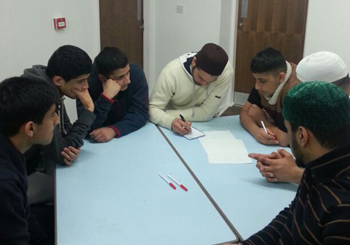 On the second day of the retreat, an ice-breaker session and group activity was held after breakfast. As part of the ice-breaker, each person was asked to stand and briefly introduce themselves and state three things no one in the room knows about them. The ice-breaker session created a relaxed and friendly atmosphere and the youth spoke confidently. The group activity was to discuss problems being faced by Muslim youth in Britain. For the first half of the discussion, participants were organised into groups of 5 to 6. One person from each group was selected to present the points from their discussions. Some of the issues raised included drugs, alcohol, gang violence, racism and bullying. The discussion gave the youth the opportunity to share their personal experiences. The second half of the activity was to suggest solutions to the problems that were discussed. The need for mosques and other Islamic institutions to initiate programmers aimed at tackling problems being faced by Muslim youth was a suggestion that was reiterated. 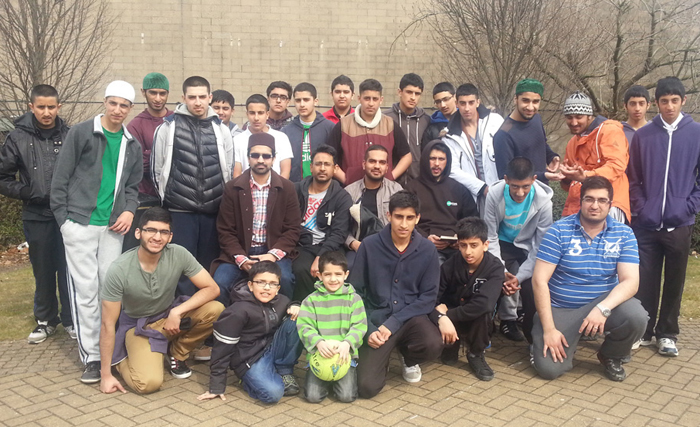 Following the group activity, Shaykh Rehan delivered an enlightening talk on knowledge and its pitfalls. The session was open for youth to ask questions at any point of the talk and some asked questions related to Aqeedah (belief) issues and the belief of the extremist groups regarding the creation of Prophet Muhammad (P.B.U.H). Other questions were raised about social integration in the 21st century and how the youth could participate in society but at the same time practice their religion. After lunch, brother Umar Naveed a coordinator of the social media team for the Pakistani anti-corruption campaign, delivered a talk on Dr Tahir ul Qadri’s struggle to eradicate corruption in Pakistani politics. It was an opportunity for the youth to understand the political scourge being encountered in Pakistan. The youth were encouraged to join the cyber activism teams and use social networking as a tool to fight the corrupt and oppressive political system of Pakistan.

Following brother Umar Naveed’s talk, an important workshop was held on how to perform Salah (the Islamic ritual prayer). Shaykh Ali Akbar Qadri, a graduate from Minhaj University led the eye opening session where he explained in detail the process of performing Salah. It was a rare opportunity to satiate as much information as possible on a ritual every Muslim is required to perform every day. A workshop was hosted by Shaykh Adnan Sohail Al-Azhari about the work of MQI’s charity department, Minhaj Welfare Foundation. Shaykh Adnan gave an insight into the humanitarian aid being provided by MWF in poverty stricken areas across the world. The youth were encouraged to join fundraising activities like skydives and mountain treks. Shaykh Abdul Basit Al-Azhari, a respected scholar who studied in Egypt delivered a talk on the Seerah (life) of Prophet Muhammad (P.B.U.H). He mentioned a number of aspects of The Holy Prophet’s (P.B.U.H) life and cleverly linked his talk with the lives of modern day ‘street’ youth. Shaykh Abdul Basit’s talk was without a doubt inspirational for everyone. The day ended with a special performance by a well-known Qawalli performer Lala Qadeer and an admirable nasheed reciter Afzal Noshahi, who jointly recited the praises of The Holy Prophet (P.B.U.H).

On the final day, a 5-aside football was arranged at Wolver Hampton University Sport Centre. The tournament was without a doubt a memorable ending to the Spiritual Retreat.