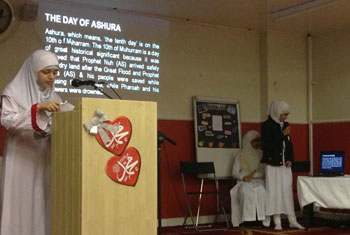 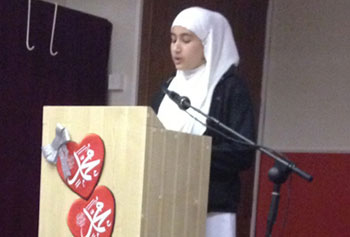 On Friday 8th November 2013, Jamia Masjid Minhaj-ul-Quran held a Muharram Conference for students who attend the centre. The event was conducted by the students themselves, with parents and teachers, in attendance to show their support and encouragement for the students. The students prepared an interesting PowerPoint presentation, to teach everyone about Muharram. They played parts of it along with video clips, throughout the programme to explain the importance and the meaning of the month. 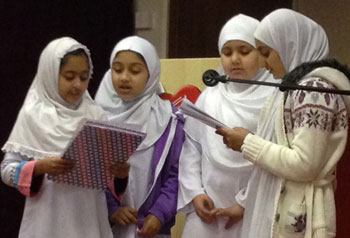 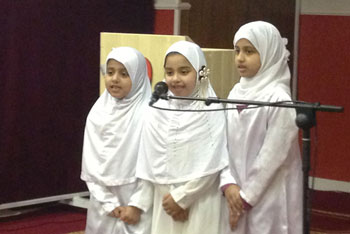 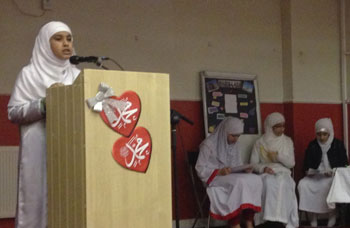 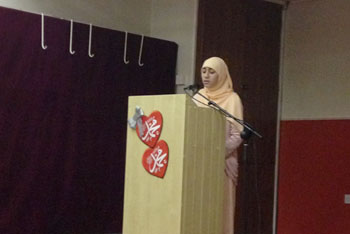 Nimra Khan hosted the event, and invited Tooba Bilal to begin the ‘mehfil’ with recitation of the Holy Quran. Qaseedah Burah Sharif was recited by Atiyah Parveen, Salihah Anjum and Maariya Bilal, as a group. The first Naat Sharif of the mehfil was recited by Haleemah Hussain, Meerab Ajaz and Ayman Ajaz. Maariya Bilal then recited a beautiful Manqabat. The first speech of the event was given by Hamna Hussain. This was followed by Naat by Iram Khan and Ayman Ahmed. There was then a poem by Ammara Sajjad, and then a beautiful Manqabat by Atiyah Parveen, who is a former student of the centre. Madiyah Hussain then gave a talk about the month of Muharram, and explained about the battle of Karbla. She spoke of the sacrifices and challenges the family of the Holy Prophet (S.A.W) faced, and how they overcame them. 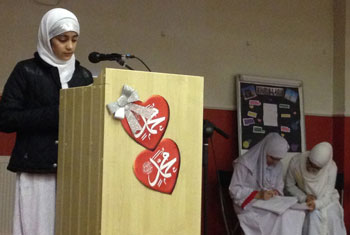 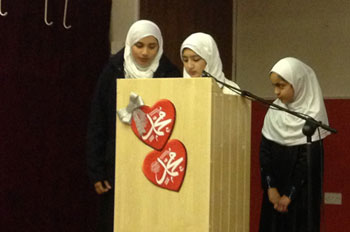 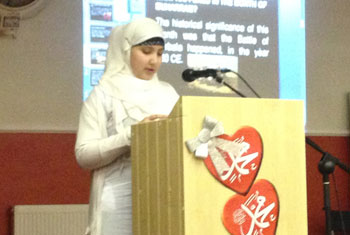 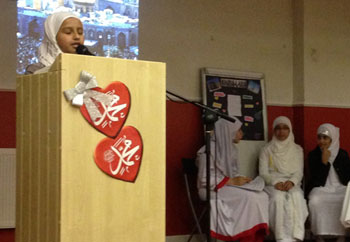 A group Naat was recited by Basma Rauf, Hafsa Waseem and Maryam Shabbir. This was followed by a poem by Jasmina Ahmed and Maryam Ahmed. There was a group Nasheed by Irtiqah, Maheen Anjum, Alisha Hussain and Anam Ahmed. Ismah Mehmood then delivered a presentation which was then followed by a short poem by Aleena Ahmed, who spoke about the Holy Prophet (S.A.W). This was followed by a beautiful Naat by Nida Ajaz, and a poem by Sana Saeed Butt. The final speech of the day was given by Alisha Ahmed and the final group Naat was recited by, Noor Fatima Mirza, Adawiyah Fiaz, Halima and Sehmoon. Laiba Khan then recited a Naat Sharif. The mehfil was concluded with Dhikr and Salaam on the Holy Prophet (S.A.W) by Atiyah Parveen and Tooba Bilal. Salihah Anjum then completed the mehfil with a short Dua. The teachers and mothers were very proud of their students and daughters. They congratulated them on their hard work and effort. The students also thanked the teachers for helping them in the preparing and presenting the programme. Everyone was served with ‘Langar-e-Hussain’ at the end.