On November 16th 2013, Minhaj-ul-Quran Sisters’ League (France) organized a seminar for youth on the following topic: “The True Values of Islam”. It was organized with the cooperation of Mrs. Sumaira Faisal, the coordinator of MSL Europe. The aim of the program was to raise youth’s awareness of acquiring knowledge of Islam. 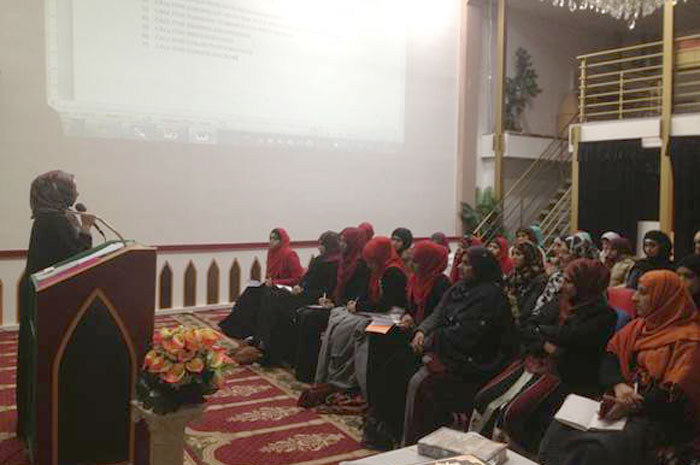 In fact, Allah (swt) said in the Holy Quran: “(O Beloved!) Read (commencing) with the Name of Allah, Who has created (everything). He created man from a hanging mass (clinging) like a leech (to the mother’s womb). Read, and your Lord is Most Generous, Who taught man (reading and writing) by the pen, Who (besides that) taught man (all that) which he did not know. Or Who imparted to (the most eminent of) mankind (the chosen Prophet Muhammad [blessings and peace be upon him] without using any pen) the whole knowledge that he was not aware of before” [Surah sl-‘Alaq]. This verse of the Holy Quran states clearly the importance of acquiring knowledge. Several ahadith were also quoted to illustrate the importance, and the duty of every single Muslim, to seek knowledge of Islam. 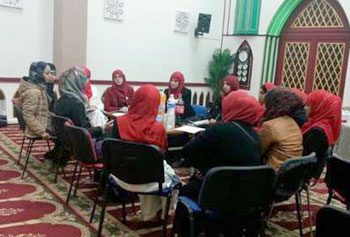 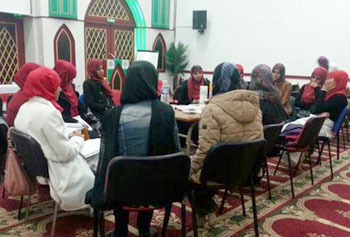 Today, there is so many institutes, places, TV channels websites etc. , where we can seek knowledge of Islam. But the question is: “Where can we seek the true knowledge of Islam?” The entire seminar was based on the talk of Mrs. Sumaira Faisal, answering this question.Mrs. Sumaira started her talk by saying that we have had all Prophets (pbut) on one side (Haq), and the existence of the opposite forces (the ANTI- Haq) on the other side: this is the law of the nature. Prophet Muhammad (pbuh) is the last Prophet, and there will be no Prophet after him (pbuh). The message of Haq (truth) must remain and pass on to the earth. When everyone is getting lost here on earth, and people are getting astray from the right path, then at the beginning of every century, Allah Almighty sends a ”Mujaddid” who reminds people of their “Maksad e Haya’at” (aim of life).Mrs. Sumaira explained that the role of the Mujadid (revivalist) is to revive the hearts, and to lead all people to the “Maksad e Haya’at”. She reminded us of our aim of life, which is to spread the message of Holy Prophet Muhammad (pbuh), to follow him (pbuh), and to be continuously conscious that we live for this reason. She illustrated this message by quoting surah al-Asr, in which Allah Almighty declares: “Indeed, man is at a loss (for he is losing his valuable lifetime), Except for those who believe and do good deeds and exhort one another to truth and exhort one another to patience (in the face of hardships and afflictions that are faced whilst preaching the Din [Religion] of truth)” [surah al-Asr]. 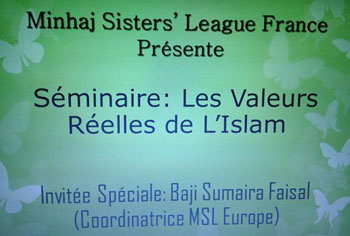 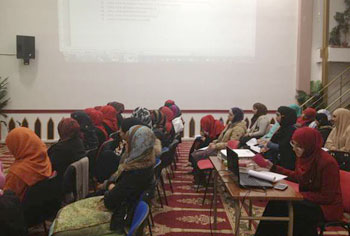 She reminded the audience that the most important and precious thing for a man is his Imaan (faith). The Imaan is not only to recite the “Kalima-e-Shahadat”, but it’s also to follow the commandments of Allah Almighty and the Holy Prophet Muhammad (pbuh). She pointed out that our relationship with Almighty God is a one-way relation, whereas Allah (swt) is the only One Who has given us health, and house, family etc. We never give Him (swt) anything in return; we are just used to take from Him (swt). But He is so Merciful that He always gives us without taking something in return. She said Minhaj-ul Quran International (MQI) is the Tehreek (organization), which has been established to promote peace, interfaith dialogue and harmony in the world under the leadership of Shaykh-ul-Islam Dr. Muhammad Tahir-ul Qadri, Mujaddid of the current century. She wrote down, on a blackboard, the targets of MQI through modes of Dawah (propagation), the major objectives of MQI, and the ideology of MQI. First, we have started by MQI’s seven modes of Dawah, which are:

• The call for affiliation with Allah Almighty: MQI’s role is to revive people’s link with Allah (swt)

• The call for association with with the Holy Messenger (pbuh): According to aqeedah of the companions of Holy Prophet Muhammad, Prophet Muhammad (pbuh) should remain the most important person than anyone else in this world, without this set as first priority there is no Iman. MQI revives people’s link with Prophet Muhammad (pbuh). MQI affiliates are “modern traditionalist” which means that they can have everything; high level education, good clothes, beautiful houses etc. like other people, but their aqeedah is former, the same as Prophet Muhammad (pbuh) gives us.

• Call for turning towards the Holy Quran: MQI gives Quran education for everyone

Then we continued with the four major objectives of MQI, amongst them the “Dawah and propagation of True Islamic values” and the “Revival of Islamic sciences”. We finished by the ideology of MQI which consists in a scientific, spiritual and practical presentation of Islam. Ms. Sumaira addressed the topic in a very clear and comprehensive way for the audience, from the beginning till the end. To conclude she said that a Mujaddid is the one who interprets Islamic values compatible with moderns times, because Islam is for all ages. At the end of the seminar the team of MSL France had a meeting with Mrs. Sumaira Faisal.