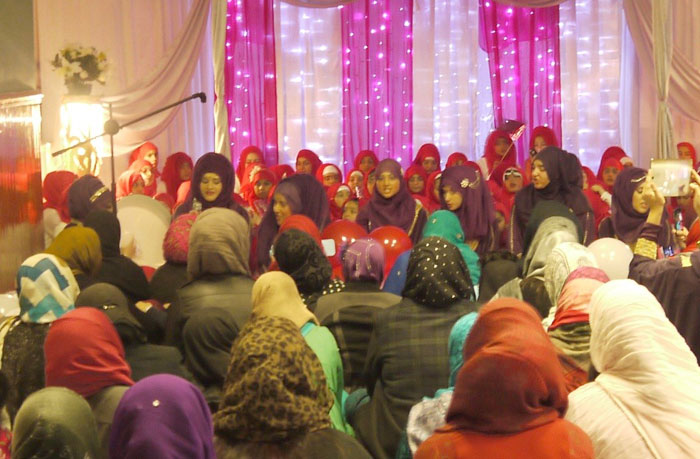 The preparation of this event stared in October 2013. In order to get the children ready for the event and inculcate in them the love of Prophet Muhammad (SAW) into their hearts, the importance of reciting daroud Sharif was emphasised. Every evening, the girls of Fatimah House and Aisha House would present their durood sharif to their teacher, which would then be collated by sister Afshaan with the intention to present it in the honour of the holy Prophet (SAW) on the Milad day. Through this method, it was evident that there was a change in their behaviour and imaan. The girls started to get their mothers, aunties and sisters to start reciting daroud Sharif in order to beat the other class. Alongside the daroud recitation, sister Rehana also started to help practice naats, and nasheeds with the girls and younger boys every Friday during assembly. Through this way we were preparing the children gradually and allowed organisers plenty of time to bring in any changes needed. Alongside these activities the fundraising for the event also started to take shape at the end of the month of Muharam. Letters were written to inform the parents that a mawlid event would be taking place for which during the next 6 weeks various activities will be conducted. Sister Afshaan was leading the way in organising these activities and motivating the girls to do better. As expected the parents co-operated very well with the teachers and the organisation of the event. The children and their parents contributed very generously. The girls of Fatimah House got involved and took responsibility of going around the classes and collecting money from the children. They also baked cupcakes and cakes which they donated for week 5. This was a brilliant opportunity to take up new responsibilities and learn skills. Many parents really appreciated this effort. Through these activities and donations, we were able to collate over £620, which is a huge achievement for the young girls and boys of the Centre, which was to be used for a mawlid event. The teachers as well as students really enjoyed these 6 weeks of preparation. A note to be remembered is that in addition to these activities, children were also reciting daroud Sharif and practising naats. Hence teachers were putting in a lot of hard work making sure that in addition to this work, their educational activities were not being affected. By now the organisers had also started to plan how they saw the event taking place. They shared the vision and all sisters knew what they wanted from the outcome, hence making it easier to organise. The first aspect that was confirmed was the colour scheme for the event it was decided that the children would wear white clothes and pink scarfs. Sister Rizwana was able to obtain pink scarfs at a wholesale price. Letters were written again to inform parents about wearing white clothes so that all girls are wearing the same shade of pink. To our surprise the response was overwhelming. 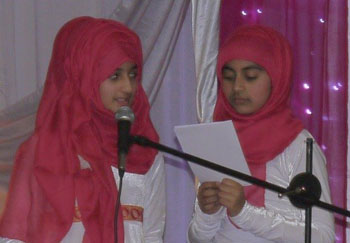 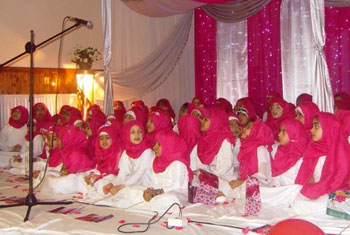 A meeting was put together for all organisers and teachers to participate so that they could be informed about the shared vision which the organisers had. The intention was that everyone should be allowed to share their views and give their input. Sister Rubina had various ideas and that helped us critically evaluate opinions of the organisers and change their plans to adapt to requirements. The next step was to prepare children for the individual speeches, naats and activities, although they had been rehearsing their collective naats with sister Rehana. Sister Afshaan had the responsibility to make sure that there were students participating from each class and helped to organise their speeches and naats. She took the responsibility of preparing the contents of the event and producing an itinerary. With the help of sister Saffiyah, regular rehearsals of their speeches and naats allowed them to be well prepared for the event. The poster was also designed by sister Rehana and taken for printed by professional printers. The response of the poster was overwhelming with many feedbacks as to how well the poster had been designed, it was very unique from other posters that existed. Sister Rehana ensured that the poster went with the chosen theme. These provided an opportunity to talk to the attendees and get to know about what the community wanted and gave an open invitation to them. Sister Rubina and sister jannat would regularly announce the event.The week leading to the Mawlid was very busy one and required all the teachers and pupils to start rehearsing for the event. The children were taught how they were to be seated according to height and in what order they will be performing. Alongside the other activities the organisers also had to design flags so that the pupils could use them to wave during the event. Special gifts were also being prepared for all the children participating. Certificates were also designed for the most durood Sharif recitation. Lights were also placed outside the Idara according to the colour of the theme white and pink.The day before the event the stage had come up and balloons and the room was decorated. Organisers came in early to prepare the gifts and last minute decorations and activities. 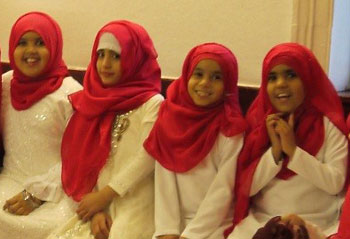 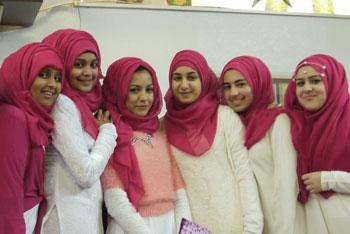 All parents and children were told to arrive at MQI Centre at 4 pm. All parents were seated in the main hall where they were welcomed by the organisers and handed a schedule and a pouch of chocolates as a welcome gift. Whilst the parents were being seated in the main hall, the children were gathering in the other room and making lines in order to make their entrance onto the stage. The atmosphere at this moment was amazing and everyone was very excited. The children were very happy observing each other’s clothes and looks. They students were even more excited to see their teachers in the same avatars. The students at this point had still not seen the stage setting but the parents had and they were very pleased to see it. They were very eager to see their children walk on to stage as gasps could be heard ‘are they coming now?’ This excitement showed that the preparation was playing an effect on them. All parents could be seen excited and big smiles on their faces. Once the parents were seated the children were ready to enter. The parents were told to quieten down as the children were about to arrive. Sister Sara started to play the daff. All organisers took their position into seating the children. Each row came in waving their flags and reciting durood Sharif. They were coming in through a special passage prepared for them with roses. Once entered, they stood in their places waiting for everyone to come in. Once everyone was in, they all waved their flags and welcomed their parents to the event. They were standing for few minutes reciting Durood Sharif for allowing parents to take pictures and make videos. The parent’s excitement and happiness was evident on their faces. Everyone was ecstatic to see all the children in white and pink looking very smart and cute entering through the flower bed path prepared for the students. The program was hosted by sister Rehana and sister Afshaan. Below is the schedule of the event. Tilawat e Quran was done by Hasnain a 7 year old student who had learnt surah Al Duha by heart and the translation was read by Kaif. The young boys of Hussein House had practiced the Hamd ‘give thanks to Allah’ with actions. 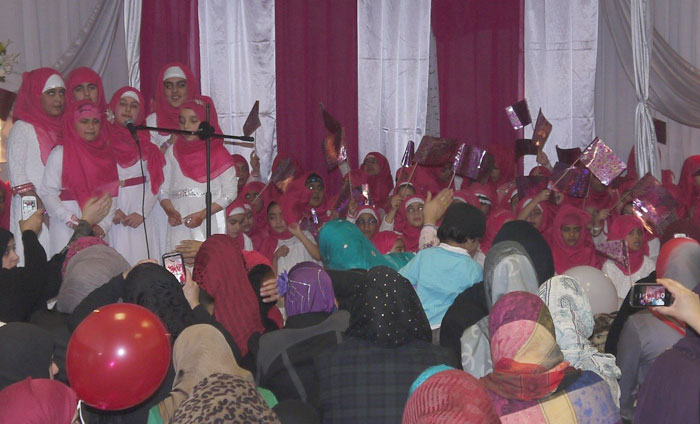 Her speech was based on praying the Salah as this is all we will be taking to our graves. Our wealth and children will all be left in this world.

• Allah huma collective naat. This naat was done with actions. 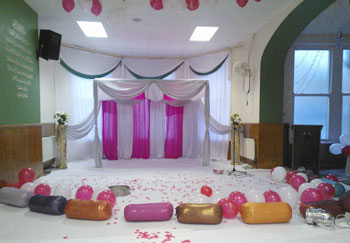 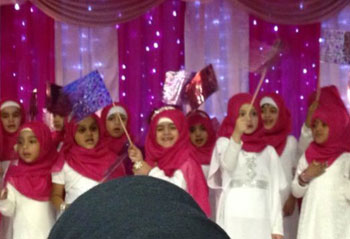 Duha spoke about why we celebrate milad in reference to how Abu Lahab freed Sawaiba and the reward he gains for it as a disbeliever so as Muslims what will our reward be.

This section was where five parents volunteered to see who could finish a plate of dessert the fastest. The winner won the English translation of Irfan-ul-Quran.

The two girls from Aisha house read the Arabic text of hadith with its explanation about ‘Muslims being the brothers of other Muslims’ and that ‘cleanliness is part of iman’.

Her speech was about having the upmost respect for all the prophets alongside loving the beloved prophet Muhammad (SAW) more than anything and anyone in the world. 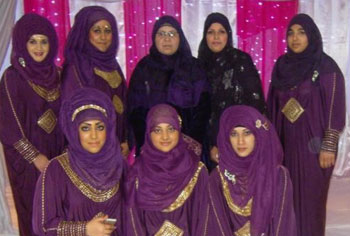 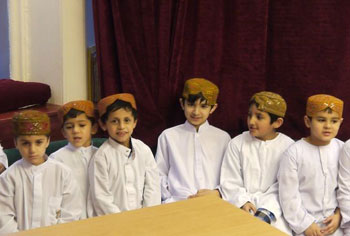 A quiz was conducted to test the knowledge of the parents about the children. Whoever answered the questions would receive a pouch of chocolates. This was very interactive and got the children cheering for their parents, as for a change they had been put on the spot rather than the children.

Sister Jannat explained how overwhelmed and proud she felt with the work carried out by the organisers. She congratulated everyone on the success of the event. Sister Rubina also added how the organisers and hosts were once the children sitting on stage and how today they are hosting the event and inshallah the children performing today will be on stage in the next few years. This was very emotional and left many people in tears as it showed how things had changed over a short span of time. Sister Jannat was given the honour of presenting the rewards. As stated earlier that Aisha house and Fatimah house would recite individual Durood Sharif which was collated every day. Both classes were given certificates in recognition of their recitation. The amount of Durood Sharif recited by Aisha house was over 4 million and Fatimah house over 5 and half million which is a big achievement from the children as they read this Durood Sharif within 3 months. The banners below were held up whilst presenting the certificates to the parents to show the exact numbers. 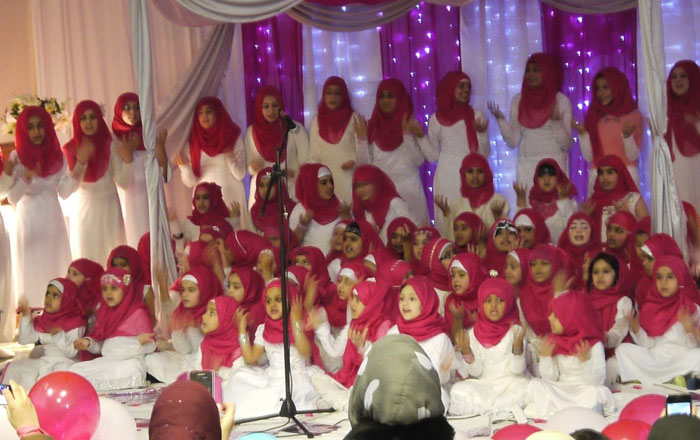 3 girls from each class were given certificates for their outstanding participation in Daroud Sharif recitation throughout three months. The girls from Aisha house are as follows:

The girls from Fatima house were:

Each girl was gifted a book on Syeda Fatimah, notebook and pen, sweets and a counter tasbee.

Then one individual from each class was given a certificate for the outstanding performance they are as following:

Then sister Rubina was given a special gift as a token of saying thanks on behalf of the children and staff. In the end all children were given a gift for their hard work and efforts. Sister Rubina explained the importance of giving these gifts as Milad is more than Christmas. It is Eid for the Muslims and giving gifts is a Sunna. All children were given a gift box that contained a nalayn Mubarak brooch whilst the boys were given a nalain Mubarak in a blue pouch. When the cake was brought the children became very excited as there was large confetti banners going off and raining from the four corners of the room. Everyone’s was given the opportunity to have a look at the cake and then the youngest boy and girl and sister Rubina cut the cake while the children recited ‘Meeta Meeta Hai meray Muhammad ka naam’. The cake was a donation from Sister Halima. After Dua everyone was served food, which was boxed so that they can take it home to eat. All attendees were told to come to organisers and give them feedback of the event and what changes can be made for future events. The food for the event was kindly donated for the Mawlid by Iqbal catering who donated rice and Punjab sweet house for donating the halwa for the event.