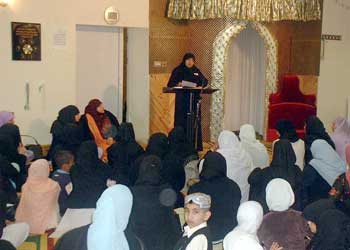 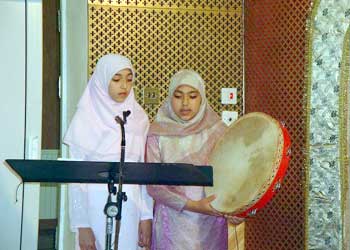 Alhamdulillah by the blessings of Almighty Allah and His beloved Prophet (saw) approximately 400 women of both youth & older participants, from all over UK gathered to participate in this splendid programme including the Minhaj ul Qaran  Sisters from Manchester. Walsar, London and Nelson.

The programme commenced with a beautiful recitation of Surah Rahman followed by a welcome speech by Sr Khadijah.

Sr Khadijah introduced the students who have recently returned from studying in ICIS (Institute of Classical and Islamic Sciences); and were fortunate enough to be taught directly from the greatest Islamic reviver of the Century, Sheykh-ul-Islam Tahir ul Qadri. She described the sacrifices they made for the sincere sake of gaining Islamic knowledge. She could wholly relate with the sisters because Sr Khadijah has also spent approximately two years working for the cause of Islam in Pakistan.

Sr Khadijah’s speech was followed by a melodious recitation of the Qasida Burda Sharif (Poem of the Scarf); recited by a group of ICIS students.

Sr Nazia (student from ICIS) speech explained how deeds will not be judged on the correctness of action, rather on the sincerity of an individual’s intention. To assert the credibility of her assertions she backed up her statements with substantial proof from Qur’an and Hadith.

Sr Ruqsana speech stressed the importance of sincere intentions behind every action. She explained how insincere intentions nullify good deeds, and how actions will be weighed rather then counted on the Day of Judgment. She pointed out that if we affirmatively made sure that all of our actions were Liwajillah (for the sake of Allah), all personal problems, disputes and arguments would diminish.

Sr Kauther (student from ICIS) delivered an intellectual speech defining and explaining the seven stages of Nafs (ego). She eloquently described their characteristics and explained the importance and method of purifying the self and defeating the Nafs. 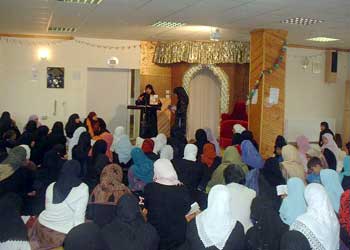 Sr Jabeen (student from ICIS) delivered a speech based on her personal experience as a student in ICIS. She described the sacrifices she made for the sake of gaining knowledge. She explained how proximity with a Scholar of such high caliber cleaned her heart, enhanced her spirituality and most importantly instilled love in her heart for the most Beloved of Allah (swt). She explained how the ICIS cleared up any misconceptions that she previously held.

The programmed rightfully ended with Dhikr, Salaam and Dua.

We would like to thank all those who went to great efforts in preparing and organising this special programme, and would especially like to pray for all our brothers and sisters who have just returned from ICIS. May Allah (swt) reward them in abundance and shower His mercy and blessings on them. And may He give us the ability to be inspired enough to follow in their footsteps. Ameen