Alhumduliah by the Grace and Blessings of Allah Almighty a Darse Qur’an class for women has been running in the London Minhaj-ul-Qur’an Islamic Centre for many years. Ladies who were not fortunate in learning to read the Holy Qur’an in their childhood or learnt it incorrectly have benefited greatly from these classes. Despite many obstacles these classes have been running successfully. Every Tuesday morning, without fail, rain or shine, the Darse Qur’an class has continued to run. May Allah ta’ala Bless all the women who have attended, as well as those who have taken time out from their home and work duties and been responsible in organising them. Below is a short report by one of the founding sisters who has been with the class from the beginning and whose hard work is an inspiration to others. 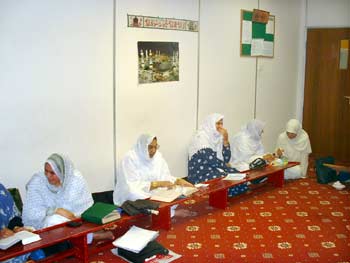 Dars e Quran classes for ladies were established in 1997 by Sister Shenaz Asif, who has been an influential president of Minhaj ul Qur’an women’s league, London. She played a crucial role in establishing women leagues in Sheffield, Manchester, Birmingham, Nelson and Rochdale.

In 1997 the class was undertaken by Shaykh Sadiq Qureshi (who now works for Idara Minhaj-ul-Qur’an, Toronto, Canada). Over the years the teachers have changed however the general format of the class has remained the same.

This class was established for sisters aged over 35, who learnt how to read the Holy Qur’an in non-Arab Muslim countries in a manner which did not place any emphasis on tajweed rules. At the time of its establishment there were very few mosques where sisters could learn to recite the Holy Qur’an correctly. Most of ladies who attend are married housewives and have very little time to attend to their own needs, always concerned about their own families and children. So the establishment of these classes was a unique opportunity to attend a regular class during the day in a relaxed and friendly environment.. 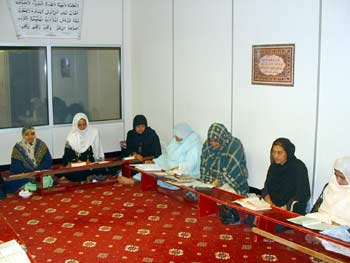 Sisters have gained invaluable teachings from this class, which has changed their lives. Sisters have learnt how to practise Sabr (patience) in times of difficulties and how to search for faults in their own selves’ rather then searching for faults in others through better understanding of the Holy Qur’an and establishing their own link with it.

Most of the sisters who attend these classes become motivated to work for the propagation of Islam and also help to arrange other Islamic events for women, especially celebrating the events of Miraj un Nabi, Shab e Baraat, Muharram and Milad ul Nabi through talks and lectures.

Occasionally one dish parties are also arranged as well as other fund raising activities such as Mina Bazaars and jumble sales, which help raise money for welfare projects in needy Muslim countries. At present the class is raising money for the sponsor a child project for Hifz-ul-Quran in Pakistan.

Some of the sisters in this class are also involved other projects such as Sister Ruqiya Younis who is currently running the Minhaj ul Qur’an, Marriage bureau.

All members of the class wish to send a message to all Minhaj ul Qur’an Women leagues across the globe to arrange similar classes in their own areas so that they are able help themselves and others.