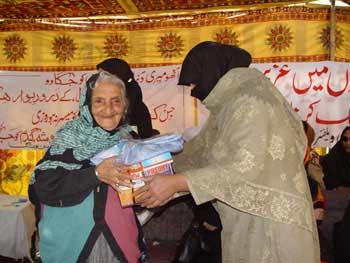 On the 25th Ramadhan 2004, the central Minhaj-ul-Quran Women League, Pakistan presented special Eid gifts to less fortunate sisters in Lahore.  The gifts were donated by other members of Minhaj-ul-Qur’an and consisted of new Eid clothes, bangles, mehendi, sugar, flour and vermicelli boxes.  The event was organized by Sister Tabassum Chatta, Nazima Minhaj-ul-Quran Women Welfare Wing along with the rest of her team. The gifts are part of the Minhaj Woman Welfare Plan which aims at helping the poor and needy. Some of the gift items that were distributed It is stated.

In the Holy Qur’an:

“Give to the near of kin his due, and also to the needy and the wayfarers. Do not squander your wealth wastefully; for those who squander wastefully are Satan's brothers, and Satan is ever ungrateful to his Lord. (17:26 - 27)” 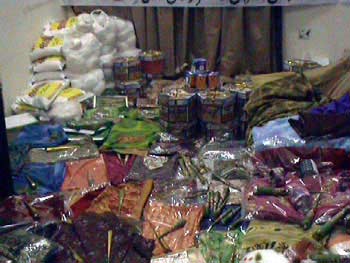 Hadrat Ibn Abbas related that the Holy Prophet (peace be upon him)said: Any Muslim who gives a Muslim a garment to wear will be in Allah's safekeeping as long as a shred of it remains on him. (Ahmad, Tirmidhi) All of the sisters who received the gifts were those women who work very hard for a living, do not beg on the streets but often work up to 20 hours a day just to provide food and shelter for their families.  The recipients of the gifts came to the ‘I’tikhaf City’ to receive their gifts.  At the ‘I’tikaf City’ thousands of sisters were sitting in collective I’tikaf in the Minhaj Girls Shariah College, having come from all over Pakistan.  One of the aims of the distribution was not just to help those that are less fortunate but also to motivate all the sisters who were attending the spiritual gathering, in order to remind them that Islam is not just a religion encompassing the inner and outer dimensions of worship, but a Deen, a comprehensive way of life that includes creating a fair and just political, social and economical order based on the Qur’an and Sunnah.  As such the sisters who were present became highly motivated, with many sisters donating funds to other Minhaj Welfare projects as well as promising to help the poor and needy in their respective home areas. 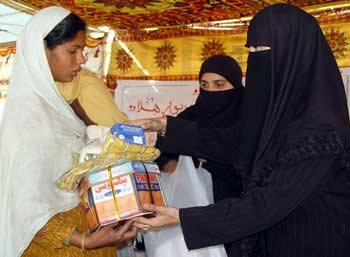 It was a very emotional sight to watch these humble women receive their gifts.  All those present were well aware that these were just tokens - a gesture of help since drastic changes are needed to improve the living standards of these families.  Nevertheless every recipient of the gifts praised Allah Ta’ala saying Alhumdulilah again and again, some even crying just thankful that somebody cared.   Hadrat Safwan ibn Salim related that the Holy Prophet (peace be upon him) said: Anyone who looks after and works for a widow and a poor person is like a warrior fighting for Allahs cause, or like a person who fasts during the day and prays all night. (Bukhari)

Hadrat Anas related that the Holy Prophet (peace be upon him) said: If any Muslim plants something or sows seed from which a man, a bird or an animal eats, it counts as a charity for him. (Bukhari, Muslim)  May Allah Ta’ala give us the taufeeq always help those who are less fortunate than ourselves. 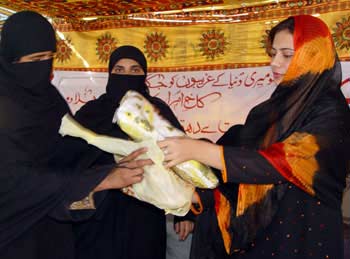 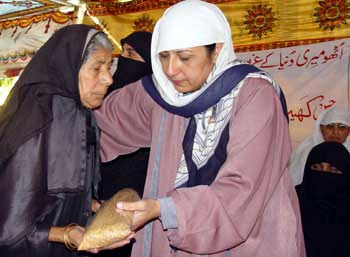 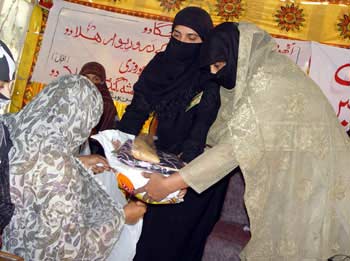 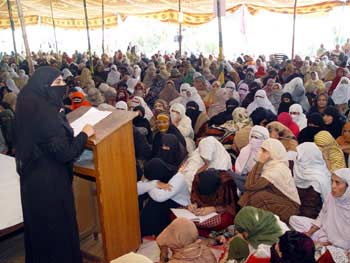 Sister Farah Naz, Nazima Minhaj-ul-Qur'an Women League giving a lecture on the importance of helping the poor and needy. 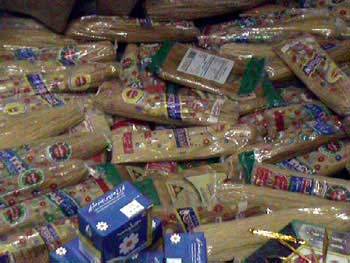 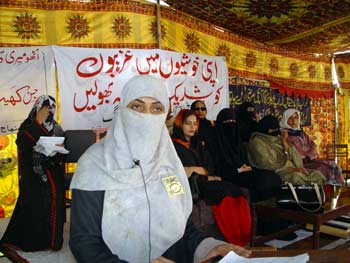 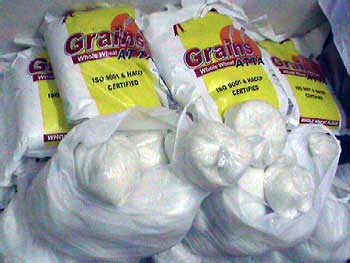 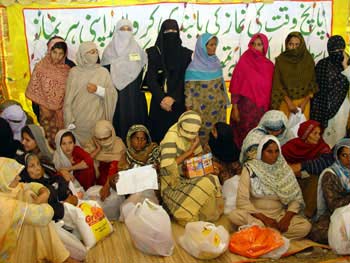 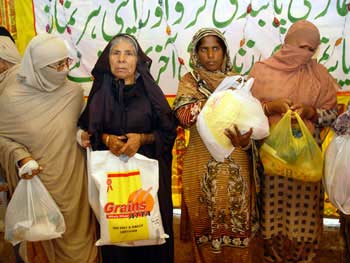 Some recipients of gifts 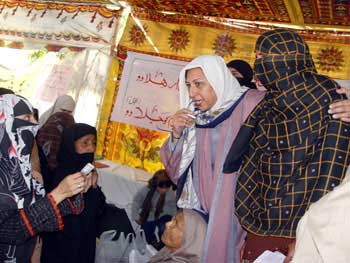 A sister being comforted after describing her poverty stricken household