On 21st May 2014, Jamia Masjid Minhaj-ul-Quran (Nelson) began weekly lecture sessions for young students who attend the education centre. Sister Tahira Basharat, head teacher at the education centre, invited Sister Atikah Parveen, a member of the Minhaj Youth League, and deliver short talks about a number of topics that often affect the youth of today.

In the first talk, Atikah Parveen talked about the effects and consequences of smoking, drugs and alcohol. She spoke about how the Holy Quran had declared clearly that these types of intoxicants were Haraam and forbidden in Islam. She finished with some words of advice from Shaykh-ul-Islam Dr Muhammad Tahir-ul-Qadri, who has emphasised on the importance of good company and friends. If you keep the right group of friends and company, Allah (SWT) will guide you and will keep you on the straight path. 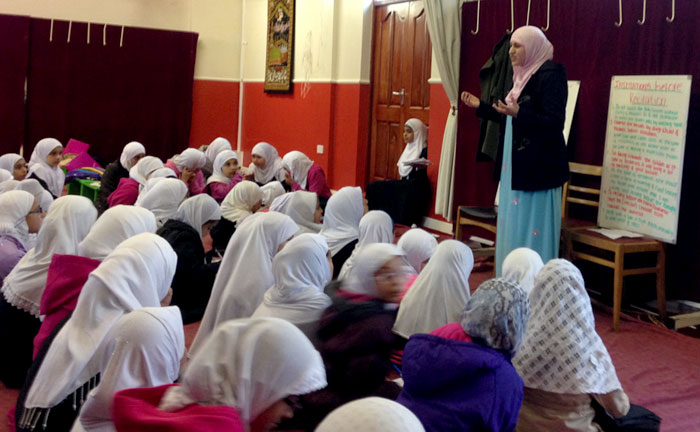 On Wednesday 28th May 2014, the second topic in the series was discussed by Sister Atikah Parveen. This was about the importance of respecting and being good to parents. A number of Quranic verses were discussed, which emphasised the need of not being ill-mannered, raise your voice or show contempt towards parents.Sister Atikah also discussed the amount of hardship a mother undergoes in her life for her children. It was also stated that the Holy Quran has ordered us to obey “those who hold command over you”. This includes parents and teachers. Sister Atikah said that teachers replace parents in the school, and masjid. Thus they should be respected and obeyed in the same way that parents are.  She finished with advice to respect and honour parents, and to listen and obey them so that they can be a means to paradise on the day of judgment.

On the third week 4th June, Sister Atikah talked about Haraam or forbidden relationships. She began with a quote from Surah Al Nisa, verse 4 which states “do not keep secret lovers”. She touched on the fact that schools are the breeding grounds for bad choices and relationships. In schools, girls will have boyfriends because they think it is cool. They also think it’s cool to text their boyfriends but in fact it is forbidden in Islam. However this creates pressure on friends around them to do the same thing. This is because we are influenced by movies and TV shows, where having a relationship before marriage is common. Sister Atikah then stated that the honour and respect of a girl should be worth more than peer pressure. So we should value it and appreciate it more. If we have bad company, we are tempted to do bad things, often starting with minor things, but eventually it leads to greater sins.

The final comment was words of advice from Shaykh-ul-Islam Dr Muhammad Tahir-ul-Qadri, who says that we should “keep the right company in which the friends of Allah are remembered, and inshallah He (SWT) will guide you”. 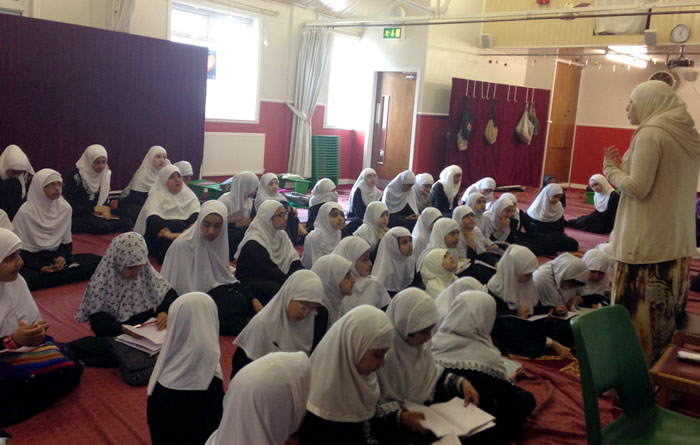 On Wednesday 11th June 2014 sister Atikah delivered the fourth talk to students of Jamia Masjid Minhaj-ul-Quran. She talked about pride, ignorance and arrogance. She explained that pride was pleasure from achievements, ignorance was lack of knowledge and arrogance was being aware but careless.

She also stated that it was mentioned in Hadith that if anyone has even a mustard seed of arrogance in them they will not be allowed to enter paradise. In the same way, the Holy Quran has commanded us to not have arrogance in our walking and talking. We should have modesty in our actions. The students were also reminded that Shaytan was thrown out of heaven because of his pride and arrogance. When Allah (SWT) ordered everyone to prostrate to Hadrat Adam (AS), Shaytan said “I am better than him”, i.e. that he was better than Hadrat Adam (AS) and so did not want to bow down. So it is important to remember that Allah (SWT) turns away from the arrogant people. We as Muslims should do every action with humbleness. When we work for the religion of Islam we should do it for the sake of Allah (SWT) and the Holy Prophet (SAW) not because we want to be complimented on it.

On Wednesday 18th June 2014, another talk was delivered by MYL member, Sister Atikah. She talked about the importance of saying salaam and greeting with one another properly. it was said that saying the Islamic greeting “Asalaam u Alaikum” helps create love and respect between people when they meet. There were also hadith mentioned which stated that when someone gives salaam, the replying person should give a better response, i.e. say “wa alaykum asalaam wa rahmatullah wa barakatu”. The students were also told to respect non-Muslims as well. They were told that if a non-Muslim ever did salaam, you should say “Wa walaykum” to them, meaning “and to you to”. She finished her talk with advice from Shaykh-ul-Islam that we should live in peace and tolerance, and giving salaam helps to create a foundation for this, because you are sending peace on a person. Sister Tahira Basharat also thanked Sister Atikah for taking time out to come and teach the children such valuable lessons, in a fun and interesting way. The students were also pleased and enjoyed the weekly talks.