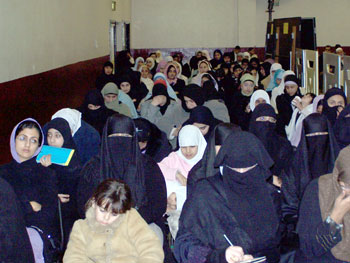 By the Grace of Allah (Almighty and Glorious is He) and the blessings of the Prophet (Allah bless him and give him peace), hundreds of women, men and youth, gathered together in a community centre in the heart of the Muslim community in Halifax, to commemorate the martyrdom of Imam Hussain (may Allah be well pleased with him and his father). The date was the 10th Muhurrum, the Day of Ashura.

The event began with a commanding recitation of the Holy Qur’an by Brother Najabat. Brother Zahir followed this by reciting a beautiful Nasheed in praise of the Holy Prophet Muhammad (May Allah bless him and give him peace) and finally a heart-felt Manqabat in praise of the family of the Prophet (saw), the Ahl-Baith. All three recitations were enough to move even the hard of hearted to tears. It is always crucial to begin any gathering of Muslims with the name of Allah Almighty. A beautifully recited Nasheed and Munqabat are also important for amongst other reasons they serve to soften the heart and Imam Ghazali (reh) once said that “when the heart is softened it is then ready to obtain the delight of intimate discourse with Allah, and be affected by His remembrance”. 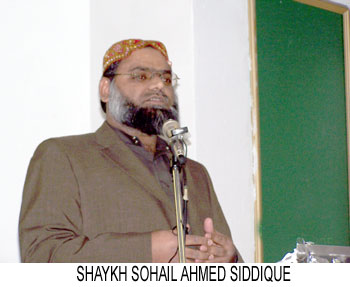 A respected Minhaj-ul-Qur’an scholar, Shaykh Sohail Ahmad Siddique was first to speak about the great mission of Minhaj-ul-Qur’an, its ideology, foundation and purpose. He then explained how our Shaykh-ul-Islam Dr Muhammad Tahir-ul-Qadri set up this Movement in 90 countries around the world in just 23 years, saying that this achievement is rare and can only be accomplished by someone of a special caliber as the honorable Shaykh.

Following this talk, a short clip of the recent Mawlid lectures by Shaykh Tahir-ul-Qadri was shown on a big screen for the audience to view. The purpose was to give the audience a taste of the vast knowledge of the Shaykh and to encourage them to purchase this knowledge for themselves and their family for Allah says in the Qur’an regarding knowledge "Are those who know and those who don't know equal?” 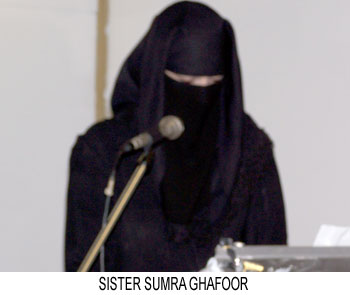 This was then followed by a talk by the second speaker, Sister Sumra Ghafoor who conveyed Shaykh-ul-Islam Dr Muhammad Tahir-ul-Qadri’s message on the significance of Hussain’s martyrdom at Karbala. She spoke of how our Shaykh –ul-Islam has taught us that the Prophet (SAW) introduced an ideal democratic and political system through the implementation of the Qur’an and his own Sunnah. based on the principles of economic justice, social equality, political liberty and the protection of human rights. “This ideal system was then corrupted and demolished by the fascist dictator, Yazeed. Imam Hussain (RO), the great leader of humanity, challenged Yazeed’s fascism by refusing to bow down to his tyranny. Imam Hussain (RO) refused to allow Yazeed separate religion from politics and by refusing to accept Yazeed’s leadership he sent a powerful message to the world that Islam does not permit the Muslim to submit before the tyrant”. She also spoke of how Imam Hussain’s (RO) sacrifice at Karbala was for the revival of moral order, human rights, law and justice and civil liberty of the good at large. The speaker then expressed that she felt that Shaykh -ul- Islam, Dr Muhammad Tahir- ul Qadri and the mission of Minhaj-ul-Quran had recaptured the spirit of Imam Hussain (RO) by working for the revival of the true interpretation of Islam; the very interpretation that Hussain stood for.

The talk was followed by a slide show presented by the Minhaj Welfare society UK. Brother Ijaz Siddiqi showed the relief efforts in the devastated areas of Indonesia hit by the Tsunami. Brothers and Sisters had volunteered to travel there and distribute the necessities to the affected people. A cheque of £1800 was then presented to Brother Shehzad Shafi, the current director of Minhaj Welfare Society, UK by the women and the youth league of Halifax who had collected the money for the Tsunami aid. 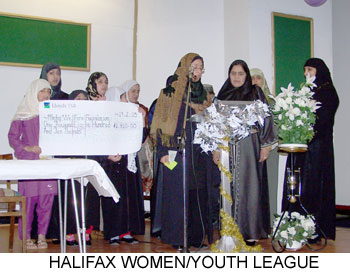 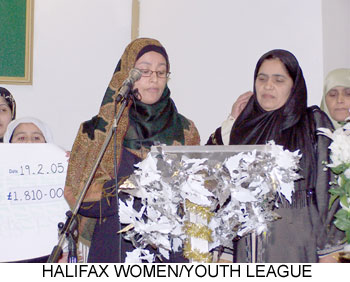 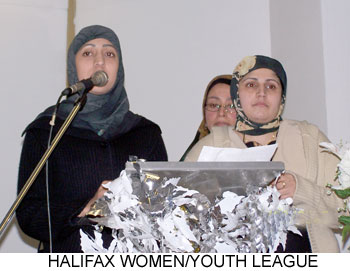 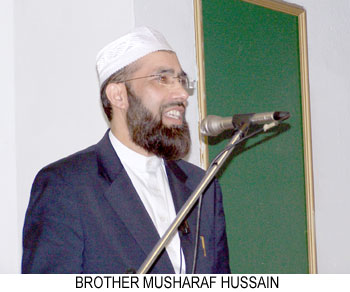 This was then followed by a talk by Brother Musharaf Hussain who is the Director Karima Institute in Nottingham. He spoke about the necessity for all Muslim organizations to show the utmost professionalism in their approach and also praised the efforts of Minhaj-ul-Quran and its leader Dr. Muhammad Tahir-ul-Qadri. 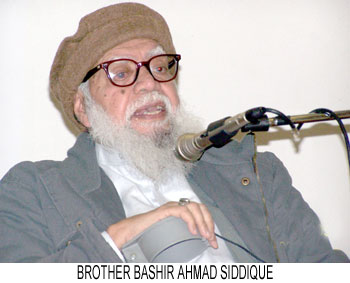 The final talk was delivered by the chief guest, Prof. Dr. Bashir Ahmad Siddique, the ex-Chancellor of Minhaj University in Lahore who had also been a teacher of Shaykh-ul-Islam Muhammad Tahir-ul-Qadri. Although visibly disabled, the respected Professor was still able to communicate his passion for Islam with amazing poise. He spoke about the necessity for Muslim parents to create Islamic homes for their children to flourish in, as they are the future leaders of Islam. He ended with a heart-felt supplication.

The event was organized by the Minhaj-ul-Quran team of Halifax consisting of men, women, youth and headed by Brother Shahid Janjua and assisted by Brother Najabat. May Allah Ta’ala accept the humble efforts of all those involved. Ameen.