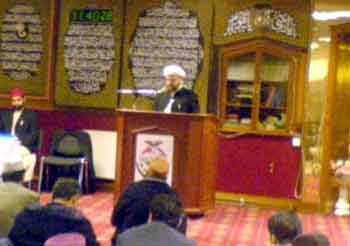 3...2...1...as the clock struck midnight people across the globe were celebrating the New Year in so called ‘style’.

Was it that the world outside was living in a façade that would be short lived? Or was it that there was no security and peace in what they had to offer? What made me spend this eve in the Idhara? My hunger for inner peace of mind, food for the heart and sustenance for my spirit.

As Muslims we do not traditionally "celebrate" the New Year, however, it is a good opportunity to acknowledge the passing of time and taking a moment to reflect on the health of our spiritual being. The Islamic New Year begins and ends with sacrifice, at Hajj and in the Month of Muharram.

As community members from the East London area started to arrive to the Dhikr 2006 programme, the family atmosphere was apparent as Uncles, Aunties, Brothers, Sisters, and Children gathered.

The evening was inspirational it began with Naat followed by a heart warming Tilaawat of the Holy Quran. As the congregation read along with well known Naats such as”Allah – humma – Saley Allah” the Idhara felt a communal warmth and closeness.

The latter part of the programme was organised for the Youth and was conveyed in English. The evening was composed of Eminent Scholars, Nasheeds and Dhikr. Talks were given by Sheikh Nisar Ahmed Sulemani, Sheikh Sadiq Qureshi and Dr Zulfiqar Ali. Imam Sheikh Gul Mohammad Saab was also present in the gathering.

Many Ahadith tells us how the Prophet was especially kind towards youth because they represented the future of Islam. He made time for them. He understood their needs and problems and trained them to take on roles of leadership.

Examples of these superb youth roles from the Holy Quran include that of Prophet Yusuf, Yaya, Maryam, Ishabey-Kaaf and Ishmael (peace and blessings upon all of them) who together with his father Abraham (as) built the Kaaba Shareef. Examples of youth in the Sahaaba, i.e. companions of the Prophet (swa) who accepted Islam and made great contribution to Islam include Hadhrat Ali (ra), Fatima uz zahra (ra), Somaya (as), Aisha(as) and Zubeyr(as).

These are the role models that we today should aspire to! The speakers encouraged us to pursue our education as it is a form of jihad – because knowledge is power. The power to communicate will help us dispel areas of misunderstanding so we may correct the image of violence, fundamentalism and barbaric attitudes which have no base in Islam.

Brother Raafek Faroz spoke beautifully of the Love of the Prophet Mohammad (swa) being the key and root of our Imaan. Love is the purpose of our existence but as we become more entangled in the formalities and rituals of the world we forget the purpose of our birth. Allah (swt) created the world in the love of the Holy Prophet (saw). He has given us the power of choice.

Sheikh Nisar Ahmed Sulemani’s speech was awe inspiring. When someone embraces Islam they recite the Shahaadat, but as Muslims we should renew our beliefs and imaan on a daily basis.

So how can we become new people? The key is to read the Kalimah of Laa-il-la-ha-illallah (see Ziaratey Madina of Prophet (saw). Book by Sheikh ul Islam). Sheikh Sulemani inspired the youth to integrate recitation of Darood and Salaam to the Prophet Muhammed (saw) on a daily basis. As Allah’s blessing and forgiveness are based upon our love and passion for Rasul (saw).

Reciting or listening to Naat of Rasul (saw) is a manner by which we may praise him. It is such a great and virtuous act that the Nabeey (saw) himself listened to Hasaan Bin Saabit reading naat in praise of himelf. Thus, we are following the direct sunnat of Rasul (saw).

Mr Zulfiqar Ali Saab encouraged us to take constructive action within our communities, be responsible for ourselves by taking positions such as governors in schools so that we can be better represented and be heard.

Let us leave this superficial world behind and lose ourselves in the love of the Hazoor. Let Him quench our thirst for life. For without the love of the Prophet (saw) it’s difficult to find Allah (swt). Love is promised to bring new life into the practice of our lives.

Let us stand united, let us be one, we are the future of Islam, we are the tomorrow. Invest and sacrifice ourselves NOW for a brighter here-after so that we as an Ummah can flourish and prevent mistakes of history being repeated. Abolish the obstacles of this earth. Let us come to Peace. InshAllah. 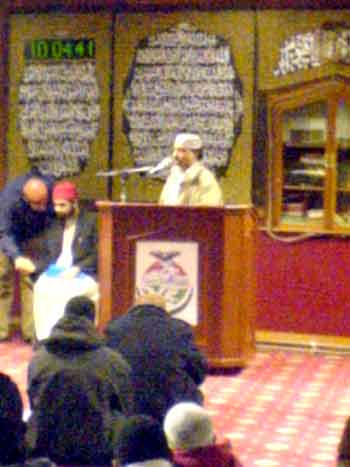 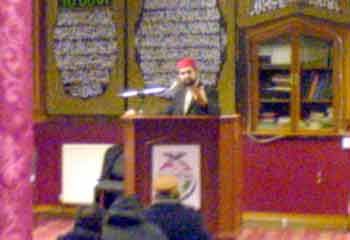 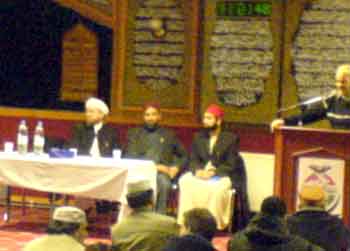