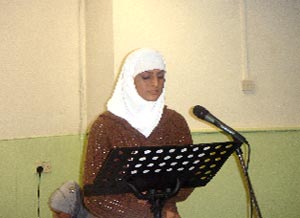 The Minhaj Youth League of Glasgow in collaboration with the Minhaj Women League organised a Mawlid-un-Nabi (SAW) programme which attracted over three hundred females. The programme began with Sister Ruhi, president of the Women League of Minhaj-ul-Quran, welcoming the attendees, and then followed by Sister Tasmia Younas (ICIS graduate) who recited Surah Rahman and translated this into Urdu and English to cater for the youth and the older audience.

Throughout the programme the Minhaj Naat Council of Glasgow recited greetings and salutations upon the Holy Prophet (saw) as well as reading beautiful Nasheeds in various styles which was enjoyed and appreciated by the audience. 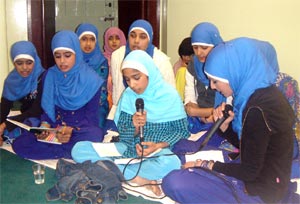 Nicola Sturgeon, an MSP and the deputy leader of the Scottish National Party (SNP), was invited as a chief guest to the Mawlid Conference to say a few words and share her thoughts with the attendees on such an auspicious occasion.

Nicola started by wishing everybody a happy Mawlid-un-Nabi (SAW) and then stated that her views of Islam were that it is a peaceful and tolerant religion which doesn’t consist of extremism. She further expressed strong disagreement with the war on Iraq and said that the British troops should be brought back from Iraq. Furthermore, she stated that she disagreed with Jack Straw’s views as she believes that everybody in Britain should be allowed to live as they wish, be free to practice their religion and display their religious symbols. Finally she thanked Minhaj-ul-Quran for inviting her and allowing her to participate in the gathering.

When Nicola was about to leave, Sister Sweba stated that at the time of the Holy Prophet (saw) when people would go to him, he would never let them leave empty handed, and presented Nicola a gift, which consisted of English literature of Shaykh-ul-Islam, on behalf of Minhaj-ul-Quran. 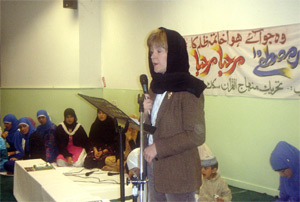 Following this, Sister Sweba (ICIS graduate) did a speech in English which focused on the importance of having a link (nisbah) with the Holy Prophet (SAW). She mentioned various incidents within the Islamic history to explain this concept, and the main focus of the speech was on the first verse of Surah Balad – ‘I swear by this city.’ She used the analogy of a tree and its leaves to further explain the concept; as long as a leaf stays with the tree it will remain green but as soon as it breaks off it will die. Similarly, the Beloved Messenger (SAW) is like a tree and we, his Ummah, are like leaves of a tree. If we hold on firmly to him, i.e. keep a link with him (SAW), then our faith will remain perfect just like the green leaves, however, if we detach ourselves from this link then inevitably our faith will wither away and die, just like the leaves. Sister Sweba concluded by inviting people to the mission of Minhaj-ul-Quran in order to gain this link with the Holy Prophet (SAW).

After the English speech younger girls were called to recite the praises of the Holy Prophet (saw) and guests from Dundee were also given the opportunity to recite a Naat.

The final speech for the programme was in Urdu presented by Sister Ambreen (ICIS graduate) who drew attention to the topic of how Allah (SWT) elevated the remembrance of the Holy Prophet (SAW) from the following verse: 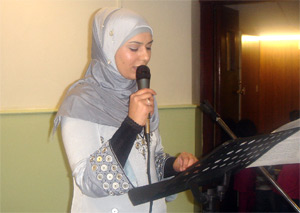 She further explained other verses to clarify this concept, and mentioned that at the time when the Holy Prophet (saw) was sad as the people had been taunting him, Allah (SWT) revealed a verse, which states to the Beloved (SAW) that those that were refuting him, were not refuting him but were in fact refuting Allah Almighty. Therefore, whenever the Holy Prophet (saw) would get sad over anything, Allah Almighty would take it upon Himself and console the Beloved (SAW).

The programme concluded with greetings and salutations upon the Holy Prophet (SAW) followed by dua and the distribution of food. Time was also allocated for the stall to sell literature of Shaykh-ul-Islam Dr Muhammad Tahir-ul-Qadri.

Moreover, there were packs given to the youth, which consisted of English literature of Shaykh-ul-Islam as well as leaflets and to cater for the Urdu speaking women, Shaykh-ul-Islam’s translation of the Quran, Irfan-ul-Quran, was distributed as a gift. 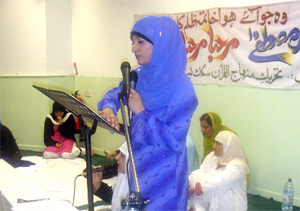 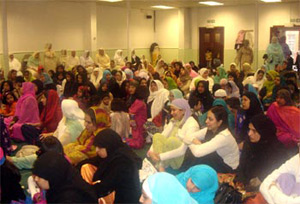 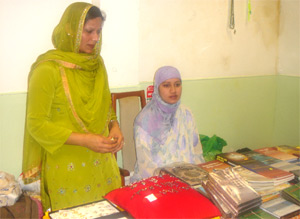