Is There Room For Despair? 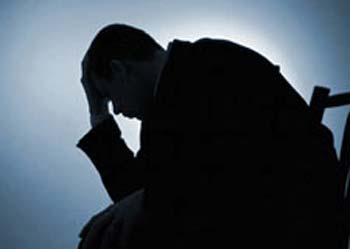 Despair conjures up feelings of isolation and hopelessness and is a topic that is often neglected within the Muslim community for some reason. What is it like to be a Muslim and affected by depression?   Muslims often think people are depressed because their iman (faith) is weak.  Some Islamic groups say it is symptomatic of being part of a capitalist society and being caught up in the ‘rat race’.  Either way it is seen as a shortcoming by the individual, which is not particularly helpful to a person experiencing depression!

However, what does Islam say about depression or despair?  There are many ayaat in the Qur’an and some ahadith which discuss the issue of despair, for example:

The renowned scholar Ibn Qayyum explains sabr (patience) in the spiritual sense.  He said in one his writings that sabr means to stop ourselves from despairing and panicking, to stop our tongues from complaining and to stop our hands from striking our faces & tearing our clothes in times of stress and grief.

The Prophet (s) said, “The example of a believer is that of a fresh tender plant; from whatever direction the wind comes, it bends it, but when the wind becomes calm, it becomes straight again. Similarly, a believer is afflicted with calamities (but remains patient until Allah removes the difficulties. And an impious wicked person is like a pine tree which keeps hard and straight until Allah cuts (breaks) it down when He wishes.’

Sometimes we are met with afflictions and these can often test our iman; as Muslims we believe that these are in fact tests from Allah (swt).  Nobody was tested more than our Beloved Prophet (s).  Let us consider briefly some of the afflictions set upon Allah’s (swt) most beloved messenger.

At an early age the beloved Prophet (s) was deprived from having the emotional attachment of both parents.  Before his birth his father died.  Then he was orphaned at the tender age of 6 when his beloved mother Aminah (r) died.   Even while his mother was alive he was sent to live with a foster mother.  So he never experienced that special mother-child bond which most of us take for granted.

He was the only child and was unable to experience the security of companionship which having siblings can bring.  Whilst orphaned the beautiful young Muhammad (s) was taken under the wing of his noble grandfather Abd-al-Muttalib (r).   Realistically speaking he could have been sent anyway to any of his younger relatives like Abu Lahab who could have adopted him and surely would have abused his power of authority over the young and vulnerable Muhammad (s).  It was a planned Mercy and a Blessing of Allah (swt), who was always watching and looking after him, that he stayed with his grandfather.

Muhammad (s) aged eight was once again faced with experiencing death and loss within his family as his grandfather passed away.  Surrounded by death and loss he lived with his Uncle Abu Talib (r).  Little did the beautiful young Muhammad (s) know that he was the student of the Almighty who was planning and preparing him for an even greater struggle!

His humble uncle showed him nothing but love and kindness even over his own children and it was during his life with his beloved uncle that the Prophet (s) married.  His wife, the great Hadhrat Khadijah (r), gave birth to two boys, both of who went back to their creator during infancy.  During the same period the Prophet (s) lost both his uncle and his wife and this time is known as the ‘year of sorrow’.

As if all this was not enough, during the Prophet’s (s) lifetime he saw the death of all of his other children, including a third son,  with the exception of his loving and faithful daughter Hadhrat Fatimah-uz-Zahra (r), who passed away shortly after her father’s demise.

The Prophet (s) at an early age was forced to consider the meaning of life; these experiences of death enabled him to do so.  He had also learned not to become co-dependent on fellow humans.  This deep thinking beyond his material status prepared him for the weighty mission of prophethood.

Such is the greatness and most noble character of the Prophet (s) that whist alone from his diseased beloved ones he attempted to approach the people of Ta’if to build alliances.  Already saddened, he was met with stones and insults by the street urchins.  While he rested bleeding from his injuries, Allah (swt) sent Angel Jibraeel to ask what the Prophet (s) wanted done with the city of Ta’if, whether he desired for the whole town to be crushed to the ground.  The Prophet (s) merely replied, “Guidance and forgiveness from Allah for the people.”

Because we live within a culture and society of blame, people who are often in a state of despair search frantically to hold others responsible to apportion blame.  Quite often people are not satisfied until they see the suffering of those whom they hold responsible for their troubles and condition.  This may, in the short term, alleviate some of their own suffering and despair.  However, we must look at the Prophet’s (s) own experiences.  Nobody would have had more right than him to have ordered Angel Jibraeel to crush Ta’if, and with one single command from Allah (swt) this could have become a simple reality.  However, though thoughts of despair accompanied the physical injuries that the Prophet (s) endured he continued to show mercy and compassion.  He was accordingly rewarded for his great display of patience and humility as Almighty Allah gave him the Blessing of the m’iraj (the night journey to the seven heavens); then with the biggest Blessing of all, an exclusive meeting with Allah (swt). Who could ask for more?

Depression or despair can be attributed to a variety of reasons. For example:

As Muslims if we find ourselves despairing or feeling depressed we could start by asking ourselves which of the above category applies to us, and then try to truly examine our circumstances.  Islam holds the key to all of life’s tales of ‘woe & pity.’   We can look at the situation of our brothers and sisters around the world.  Look at their condition and struggle then compare it to our own.  Then once again look at the struggles of our Beloved Prophet (saw) and ask our selves why our own life should run smoothly with no hardships and whether our hardship is more problematic than that of our beloved Prophet (s).

According to a hadith of the Prophet (s):

‘Allah tests those whom He loves.’

People do survive all this, and, with the Mercy of Allah, are able to grow and be better for their experiences by returning to the natural way of life as prescribed by Islam, and implemented by our beloved Prophet (s).