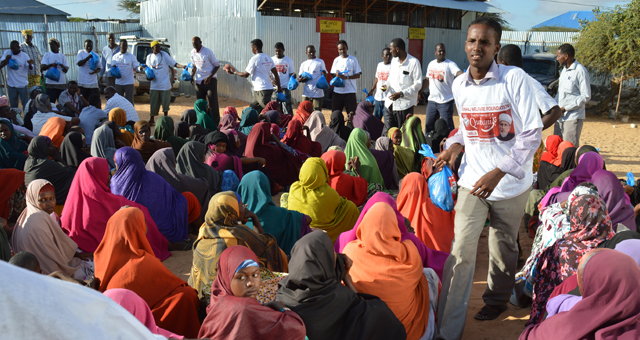 Minhaj Welfare Foundation (MWF) for more than two decades has been carrying out Qurbani program in the poorest regions of the world. We would like to thank our donors in UK, Europe (France, Holland, Denmark, Norway, Italy, Spain, Germany & Austria), North America (USA & Canada) and worldwide for Sharing their Qurbani with MWF.

During this Eid-ul-Adha, MWF distributed more than several thousand shares of Qurbani meat to approximately 200,000 people in need.

MWF completed the sacrificing of the Qurbani’s in Asia, Africa and the Middle East. The shares of the Qurbani were distributed to the needy in marginalised communities.

The MWF team travelled to the regions in which Qurbani was performed on the occasion of Eid. MWF was not only sharing Qurbani meat to their brothers and sisters in need but at the same time providing relief and development to those in need. This included providing support in programs such as education, healthcare, emergency relief, general welfare and sustainable projects. MWF believes very much in Sharing the Blessings of Eid with those in need.

Qurbani 2014 was mainly implemented in crisis affected areas such as Pakistan and war zones such as Somalia. Besides these countries, MWF have also distributed Qurbani meat to Muslims in need.

Sharing Qurbani with the people of the Pakistan Floods 2014

South Asia had witnessed one of the biggest ever floods in the region, millions of lives directly were affected and thousands more died from heavy rains. MWF teams and volunteers set up camps in South Punjab and Sindh, the area’s most heavily affected by the floods, to provide emergency relief. MWF’s Qurbani campaign was divided in more than 20 flood affected areas, making it one of the largest scale Qurbani programs of 2014.

Remembering the IDPs of the East Africa drought

Ever since the drought affected more than 10 million people in Somalia, Kenya and Ethiopia, we have seen one of the largest IDPs (internally displaced people) in Somalia especially in Mogadishu in which more than 1 million people still live in make-shift camps.

This year, MWF carried out its Qurbani program in central Somalia outside the capital Mogadishu. MWF mainly focused on providing ‘food security’ to families from the Sukus IDP camp. An MWF team from UK travelled to the region to ensure Qurbani was performed correctly and the meat was distributed fairly.

Qurbani for the people of Syria and Gaza

MWF teams did not forget the people of the Middle East. The teams sacrificed shares of Qurbani animals and distributed it to needy students of Palestine and Syria.

MWF has been implementing relief and development project in the North Eastern region of Kenya since 2011. In addition to our current projects, basic nutrition is still rare in the region. This is why Qurbani is a very key program and provides an opportunity for poor families to share the joy of eating meat after almost a year of waiting. The local MWF team this year expanded its program by sacrificing animals in more than 10 villages and towns.

Remembering the Muslims of India

MWF performed Qurbani of more than 250 sacrificial animals in India. With the help of its local field officers, the Qurbani program was divided amongst schools, orphanages so that children could also celebrate the blessings of Eid with a decent feast.

Central points were also collated across many parts of South and North India in which marginalised communities were able to come and collect their share of meat.

The joy of the people of Bangladesh

MWF went to region in Bangladesh where poor families including the elderly and children anticipated the Qurbani meat. MWF teams delivered the meats of the sacrificial animal to the poor families that live in the rural areas of . Sharing the joy of Eid-ul-Adha, the small community of thanked the MWF team and took the Qurbani meat home.