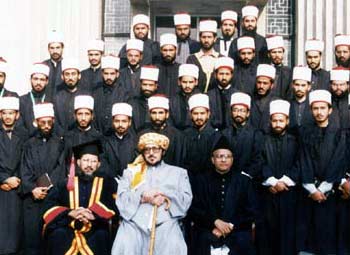 All praise to Allah and blessings and salutations upon His Messenger; the Kareem (Kind) and Ameen (Trustworthy) Prophet Muhammad (SAW).

In the name of Allah the beneficent the Merciful

It is a source of great sadness for me and for the whole Muslim world that it has lost one of the most learned and senior Islamic scholars of our time. The loss of Shaykh Al-Sayyid Muhammad bin Alavi al-Maliki al-Makki is such a great irreparable loss that the Muslims of the World will not perceive it until some time in the future. As the Holy Prophet (SAW) stated:

Hadith: "The death of a scholar is such a tragedy that never comes to an end and such a crack that can never be filled"
(Al-firdaus ad-Dailmi, p.148, Hadith No: 6458)

Shaykh Al-Sayyid Muhammad bin Alavi al-Maliki al-Makki was one of the sole scholars resident in Saudi Arabia who openly propagated, preached, safeguarded and proved the truthfulness of the beliefs of the Ahl-us-Sunnah, through the power of his great knowledge and wisdom. He was a torch bearer of the true Islamic creed and was a true lover of the Holy Prophet Muhammad (SAW). His book al-Mafaheem is proof of this and is evidence of the Shaykh's great and vast Hadithic knowledge. This book is taught in our Islamic studies courses in The Minhaj University. The world has not only lost a scholar but has lost knowledge, as the Holy Prophet (SAW) said: 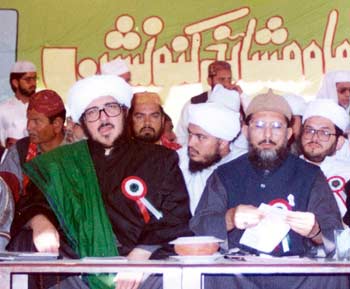 Hadith: "Allah does not take away knowledge, by taking it away from (the hearts of) the people, but takes it away by the death of the scholars
(Bukhari Volume 1, Book 3, Hadith No: 100)

With Specific regard to myself and Minhaj-ul-Quran International (MQI), Shaykh Al-Sayyid Muhammad bin Alavi al-Maliki al-Makki, showed so much support and personal interest in our work. He famously awarded me his ijazah in Hadith for barakah which he named as an-nur-ul-bahir fi- ijazati ash-Shaykh Tahir.

He blessed Minhaj-ul-Quran International by visiting it in 1995 and took part in the first convocation of The Minhaj University. He was a great aid in assisting our mission of unity in the Muslim Ummah as he himself was a great symbol of unity.

When ever I used to travel to Makkah I was always invited to many functions, programs and dinners by Shaykh Al-Sayyid Muhammad bin Alavi al-Maliki al-Makki. We had many memorable programs of zikr and praise to the Prophet (SAW) during nightly vigils.

I had the pleasure of spending time with him last year, which was our last meeting, at the mausoleum of Maulai Idrees, the grandfather of Shaykh Al-Sayyid Muhammad bin Alavi al-Maliki al-Makki, in Fass, Maghrib (Morocco). The meeting was totally coincidental, may be the reason of this surprise meeting was due to the fact that the Shaykh was to leave this world soon after and Allah (SWT) wanted us to have a final get together.

We accidentally bumped into each other in the market at Fass. The Shaykh then told me the extraordinary story behind how we came to meet each other. He told me that he had been in Fass at the mausoleum of Maulai Idrees for the last forty days. He had packed his bags and was set to return to Saudi Arabia. When he was at the airport in the Capital Rabat about to board his flight, he was spiritually instructed by Maulai Idrees to return to his mausoleum in Fass. He said that he was totally bemused as to why Maulai Idrees had called him back although he had spent forty days at his mausoleum. He said that when he bumped into me in the market at Fass it became apparent to him on why Maulai Idrees called him back.

Then we both went to the mausoleum together. Shaykh Al-Sayyid Muhammad bin Alavi al-Maliki al-Makki recited the qasidah in the mausoleum, which he wrote the night before in honour of Maulai Idris. Then during the night we had a very spiritual program of zikr and praise to the Prophet (SAW) which was certainly one of the most memorable programs I had participated in.

We will tremendously miss his leadership, guidance and the love which he showed to us.

May Allah raise his status even higher, and bless his soul with the qurb (closeness) of His Zaat (Being). May Allah SWT have mercy on us for the sake of his great servant Shaykh Al-Sayyid Muhammad bin Alavi al-Maliki al-Makki.