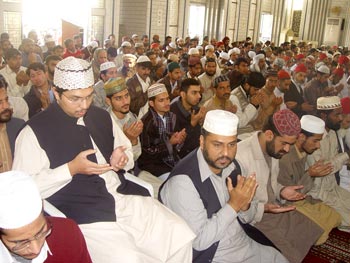 A condolence meeting of the PAT Working Council was held at the Central Secretariat of the Party in Model Town Lahore and supplication for emancipation and forgiveness of the martyred Benazir was made and seven-day mourning was announced by the party leadership. The meeting also decided to call off all the programmes and activities scheduled to be held in all the MQI centers round the world. The Central Working Council of the Party awarded Benazir Bhutto the title of 'Martyre of Democracy' in recognition of the most commendable services to democracy accomplished by her. The meeting was attended by all the central leaders of the Party including Nazim-e-Aala Rahiq Ahmed Abbasi, Naib Nazim-e-Aala Shaikh Zahid Fayyaz, Anwar Akhtar Advocate, GM Malik, Ahmed Nawaz Anjum, Sajid Mahmud Bhatti, Dr Ali Akbar, Rana Muhammad Idrees, Farhat Husain Shah, Jawwad Hamid, Haji Manzur Ahmed and others. The Party Chairman Dr Muhammad Tahir-ul-Qadri addressed the meeting telephonically from Canada. Addressing the meeting he called assassination of Benazir Bhutto the murder of democracy. He said her murder was the most heinous and shocking conspiracy and the most wicked assault against the solidarity of the federation. Expressing his deep grief over the tragic assassination of a national leader like Benazir, he condemned in most strong words this brutal, timid and barbarous act of terrorism. Expressing solidarity with the family members of the martyr, PPP workers, leaders and the whole nation at large he urged to face this most wicked conspiracy with patience and resolve.

In the meeting it was decided to organize sessions for recitation of the Quran and forgiveness supplication for the late Benazir Bhutto in all the MQI branches in-country and abroad on Saturday, the 29 Dec 2007. Nazim-e-Aala Rahiq Ahmed Abbasi said while talking to the PAT Central Working Council Meeting that Benazir Bhutto was a symbol of the federation and an identity of Pakistan the world over. It is the worst tragedy in the history of the country as it is passing through its most crucial period. He demanded an impartial inquiry into the tragic incident. He said it was always government that was responsible to ensure security and safeguard of the national leaders and the people of the country. He deplored that the government had badly failed in fulfilling this responsibility.

In the meanwhile Sahibzada Husain Mohyuddin Qadri son of Dr Tahir-ul-Qadri and a member of Supreme council of MQI said while addressing the Juma Congregation at Jami Masjid Minhaj-ul-Quran Model Town Lahore that the grievous incident of Mohtarma's murder was the most condemnable tragedy. What can one expect for the security of life and property of common man where the political and religious leaders are most insecure and vulnerable? He said Benazir Bhutto's assassination was an attempt to damage solidarity of the country. In this hour of hardship and adversity we will have to hold fast to unity, unanimity and harmony among us. The most painful tragedy has in fact shaken our hearts most violently. Those who perpetrate such callous acts of terrorism do not deserve any lenient view