During his visit to the US in November 2014, Pakistan Awami Tehreek (PAT) Leader Dr. Muhammad Tahir-ul-Qadri delivered a captivating address to a great gathering of overseas Pakistanis in Dallas, Texas on the topic of democratic rights of overseas Pakistanis. The community leaders and party members gathered together on a shared platform to not only listen to the words and perspectives of Dr. Muhammad Tahir-ul-Qadri, but also to provide their own brief viewpoints and concerns. Dr. Tahir-ul-Qadri listened attentively to each individual speaking, expressing his concerns regarding state of affairs in Pakistan and the despotic leadership it finds itself under. 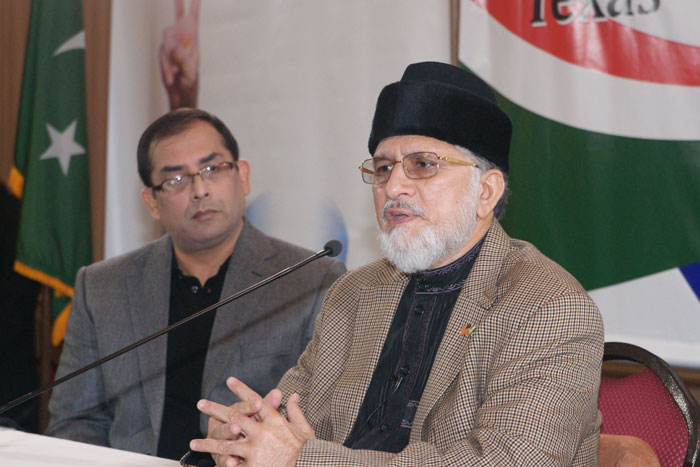 Following the short presentations by the representatives of the Pakistani community in Dallas (PTI, PMLQ, MQM, Media anchors and journalists, and intellectuals), Dr. Muhammad Tahir-ul-Qadri systematically presented his goals, explained his intentions for the revolution, and provided evidence of the dire straits the country is in, in comparison to its own prospects as well as the status of many nations around the world. One of the most powerful and devastating excerpts of his speech came from his presentation of Pakistan’s potential, as he explained the trillions of dollars in Pakistani minerals, oil deposits, and various sources of income which are all in the possession of the political members of the “royal” families and are squandered upon lost opportunities. As a master orator, these facts regarding the potential of Pakistan were so carefully related with the system of checks and balances that exists in the most prosperous nations including the United States.

Dr. Muhammad Tahir-ul-Qadri demonstrated that only the most treacherous leaderships consumed only by their own prosperity and not of their people’s would allow the disparity between the haves and have not’s be so clearly defined. However, it is the fact that the politicians are the sole benefactors of every governmental policy and acquisition of property and power which establishes the shamelessness of this regime’s leadership. Dr. Muhammad Tahir-ul-Qadri spent a portion of the night explaining the basic concepts of the social contract, a concept so rudimentary to the rule of law that no political regime could be unaware of its premises. Dr. Muhammad Tahir-ul-Qadri went even further with a copy of the Constitution in his hands showing specifically where the social contract for the people of Pakistan with its political regime resides in the Constitution, establishing the simple truth that the self-proclaimed heralds of democracy sitting in Parliament have not read their own Constitution they state they are so adamantly defending. Not only admonishing the police for its acts in Model Town ending the lives of countless civilians in Pakistan, Dr. Muhammad Tahir-ul-Qadri simply reads from the Constitution itself to present clear evidence that the Pakistani regime has found more than just one way to breach the social contract with its citizens. The failing educational system, lack of funding for basic medical care, and failure to provide food, shelter, and water to the impoverished are just a few examples of the guarantees the Pakistani government has impudently failed to uphold, many of which are the most basic of necessities. If there was any doubt in the minds of any individual listening to Dr. Muhammad Tahir-ul-Qadri regarding the status of Pakistan and the failure of the current political regime to serve its own citizens, that doubt was certainly wiped away.

Having earned his LLB and practiced law, gaining a PhD in Islamic Law, and appointed as a Jurist Consult for the Supreme Court, Dr. Muhammad Tahir-ul-Qadri displayed his expertise regarding the political and socio-economic systems of Pakistan in comparison to the world. As the audience listened, the impact of his examples and references was felt as gasps escaped from many who were shocked to hear so plainly the statistical analysis of Pakistan. Dr. Tahir-ul-Qadri described the thousands of principalities that formed the state of Turkey, and in such a dry comparison, how Pakistan had 4 provinces of its own. He explained how many international think tanks such as the World Economic Forum present the rankings of many countries around the world on an international level based on many factors such as GDP, per capita income, healthcare, education, and other infrastructural institutions. He proceeded to read this report, citing the rankings of many countries such as India and Ethiopia to name a few, and compared their rankings and indexes to Pakistan’s. On an international level, India and Ethiopia found their nations rising and falling each year by a few ranks, common on an annual basis. However, Dr. Qadri with great disappointment stated how Pakistan has fallen over 23 ranks since the rise of the most recent regime. He went further to articulate the failing status of Pakistan, demonstrating how Ethiopia spends 3% of its GDP on its health care, a country having lower ranking than Pakistan on the international level, yet Pakistan spends not even 1% on its healthcare. The discussion with Dr. Muhammad Tahir-ul-Qadri was filled with more cogent examples, but once again he displayed his legal understanding of the state of Pakistan and its socio-economic struggles.

As the night concluded, the community leaders and guest speakers all offered their respects and admiration of Dr. Muhammad Tahir-ul-Qadri and his mission to bring about a better Pakistan that is bigger than any one man or family. His selfless actions, his unbreakable resolve, and his spirited demeanor continue to inspire those that are true to the cause for a better Pakistan. His mastery of speech and his expansive knowledge are present in every word he expresses, the weight of his conviction in every syllable and the warmth of his heart in every phrase. Dr. Muhammad Tahir-ul-Qadri continues to gain support and it is clear his movement will continue to rise and a change is soon to come for the state of Pakistan.