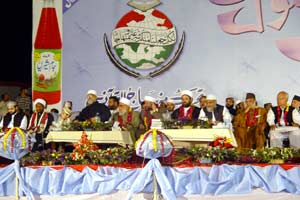 Allah SWT states in the Holy Quran, “And we have raised your remembrance for you (O Prophet SAW)” and also states, “And your coming times will be much better than your previous ones (O Prophet SAW)”. These divine injunctions of Allah SWT and promises to His beloved Prophet SAW make it crystal clear to the world that the remembrance and praise of the Holy Prophet Muhammad SAW will always be immense and will always continue to increase. Furthermore as time goes by the amount of remembrance and praise of the Prophet SAW will also continue to increase. In other words the amount, quantity and quality of the praise and remembrance of the Holy Prophet SAW that took place in 2005 was much more than that of 2004, and this sequence will continue year on year.

In relation to Mawlid, the same applies as Mawlid celebrations are the remembrance and praise of the Holy Prophet Muhammad SAW. According to this divine principle the level, quantity and amount of the praise and remembrance of the Holy Prophet Muhammad SAW done each year at the time of Mawlid-un-Nabi SAW will be better and greater than the previous year. The nature and format of the way in which Mawlid is celebrated each year, will also be bigger, better, greater and more magnificent than the year before.

The 22nd Annual International Mawlid Conference held by Minhaj-ul-Quran International (MQI) at Minar-e-Pakistan, Lahore was the practical evidence of this divine principle. The fact that Allah SWT has chosen Minhaj-ul-Quran International (MQI) to prove this principle in this year’s Mawlid is a great blessing to MQI which is carrying out the service of the Holy Prophet Muhammad SAW under the leadership of the beacon of the extreme, total, absolute and undiluted love of the Prophet of Madina-tul-Munawwerah – Shaykh-ul-Islam Prof. Dr. Muhammad Tahir-ul-Qadri.

The 22nd Annual International Mawlid Conference held by Minhaj-ul-Quran International (MQI) at Minar-e-Pakistan, Lahore was a tremendous success and brought joy to millions of people around the world. It was much bigger and better than previous years in many ways. It was broadcast live on ARY Digital and QTV giving it the largest audience of a Mawlid conference ever. 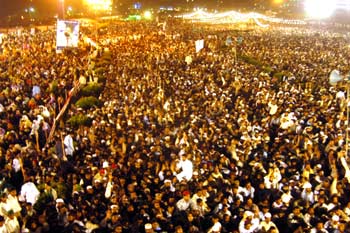 The actual turnout at Minar-e-Pakistan for the conference was also staggering. The masses had turned out in full force for the conference. The grounds of Minar-e-Pakistan were flowing with waves upon wave of Mawlid goers. This was easily the largest Mawlid conference in Pakistan and arguably the largest in the world. It is difficult to give an exact number of the participants of the conference in the grounds of Minar-e-Pakistan which seemed to be an ocean of people but the estimates range from 300,000 to half a million people. The organisers believe there were around half a million people there according to the information they had received from MQI local branches. Independent estimates from members of the media who were present put the figure to a minimum of three to four hundred thousand people and a maximum of around half a million. 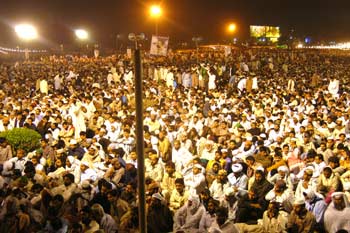 The live transmission of the 22nd Annual International Mawlid Conference held by Minhaj-ul-Quran International (MQI) at Minar-e-Pakistan has sent positive shockwaves throughout the Muslim community across the world. People have been amazed on the huge Mawlid conference and impressed with efforts of MQI to make this year’s Mawlid a truly global event.

Another first by MQI

As MQI is working to revive traditional Islamic beliefs and practices which have been subject to decay over the past few centuries, it can be safely said that it has revived yet another such practice by making Mawlid celebrations a global event. Mawlid celebrations such as the grand 22nd Annual International Mawlid Conference with it being shown live on TV channels and also on the internet has surely revived the grand Mawlid celebrations that used to take place at state level all over the Arab world including Makka-tul-Mukarrama and Madina-tul-Munawwerah for centuries up to the beginning of the 20th century.

Blast from the past 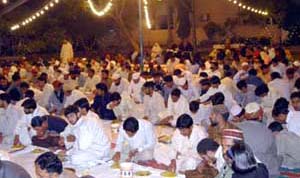 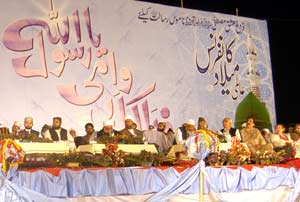 All of the internationally renowned scholars from abroad addressed the conference. There were scores of guests from Pakistan present on the stage consisting of scholars, politicians and renowned personalities from many walks of life. A few of the prominent guests were Pir Fazl-e-Rabbani of Nairyan Shareef, Mian Afzal Hayat ex-Chief Minister of Punjab, Sayyed Raza Ali Gilani Minister Housing and Urban development Punjab and Pir Jamil-ur-Rahman Chisti of Chistiyabad Sharif. 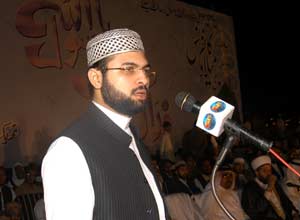 Shaykh Hassan Muhy-ud-Din Qadri chairman Supreme Council Minhaj-ul-Quran International (MQI) gave the welcoming address. He spoke in both Arabic and Urdu. He spoke about various aspects of the great status of the Holy prophet Muhammad SAW in relation to Mawlid.

Shaykh as-Sayyed Habib Umer bin Hafeez addressed the conference in Arabic via a telephonic address from Hadramout, Yemen. He congratulated Shaykh-ul-Islam and Minhaj-ul-Quran International (MQI) for celebrating the Mawlid of the Holy Prophet Muhammad SAW on the night of Mawlid in this great elaborate manner. He said everyone involved in this celebration is very fortunate and may Allah SWT enable us to celebrate the Mawlid of the Holy Prophet SAW continuously for ever.

Shaykh Babikr Ahmad Babikr as-Sudani who travelled from the UK to attend the conference earlier in the day, was also a special guest at the conference. He delivered a speech in English on the importance of the celebration of the blessed Mawlid of the Holy Prophet SAW. He emphasised on following the noble sunnah of living a simple life - as a faqir - and not a lavish life. He praised Shaykh-ul-Islam for his immense unmatched love for the Holy Prophet Muhammad SAW because of which he is doing so much for the ummah.

Shaykh as-Sayyed Mahmood Abul-Huda al-Husayni from Halab, Syria gave an emotional speech on the Mawlid of the Prophet SAW and the extreme love of the Holy Prophet Muhammad SAW.

Shaykh Assad Muhammad Saeed as-Sagharji from Damascus, Syria who also attended last year’s Annual Mawlid Conference as a special guest is one of the greatest faqihs/jurists of Syria. He gave a brief talk straight from his heart. He specifically congratulated the followers of Shaykh-ul-Islam and emphasised that they should love Shaykh-ul-Islam in the best manner possible because “loving Shaykh-ul-Islam is in fact loving the Holy Prophet Muhammad SAW” (“Inna Hubba Shaykh-al-Islam Hubba Rasul-il-Allah SAW”). He said that all of you are very fortunate to be in the company of Shaykh-ul-Islam. 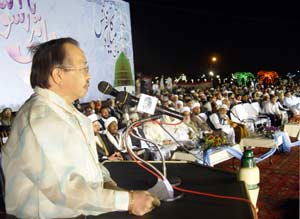 The Ambassador to the Philipines, H.E. Jaime-J Yambao, made a special appearance at the conference and gave a detailed talk on Islam and the West. He said that the Philippines used to have a Muslim population of around 90% but after colonialism the Muslim population in the country is now 10%. He said that Muslims and followers of other religions in the country co-exist peacefully. He said that the Birth of the Holy Prophet Muhammad SAW is a great occasion to show that people from different faiths and cultures are united and can live side by side. He said his presence in the 22nd Annual International Mawlid Conference held by Minhaj-ul-Quran International (MQI) is living evidence of this. 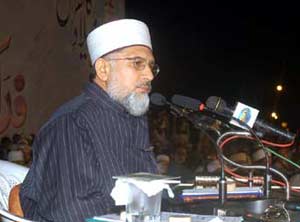 Shaykh-ul-Islam Prof. Dr. Muhammad Tahir-ul-Qadri firstly welcomed the renowned guests and scholars from abroad followed by other special guests and the mammoth audience. He said this huge gathering of hundreds of thousands of people reminds him of the famous event which made the venue of the conference famous. When Muslims of India gathered at the same location and formally declared their wish to create an Islamic state with the name of Pakistan.

Shaykh-ul-Islam congratulated the leadership, members various forums and departments of Minhaj-ul-Quran International (MQI) who worked day and night over the past weeks in preparation for the 22nd Annual International Mawlid Conference. He said that their efforts have bore fruit and have provided the lovers of the Holy Prophet Muhammad SAW the globe over with a unique Mawlid gift.

Peace be upon the Mercy of the Universe 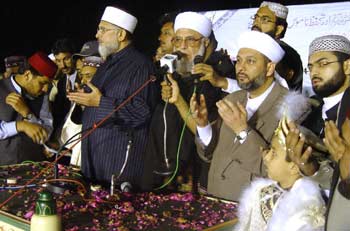 After the lecture of Shaykh-ul-Islam, the grounds of Minar-e-Pakistan mellowed with the singing of the praise to the Holy prophet Muhammad SAW by the half a million or so participants. A spectacular fire works display illuminated the sky at the same time.

The 22nd Annual International Mawlid Conference was concluded with prayers by the special guests and scholars from abroad.