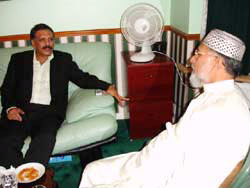 Pakistan's Minister of Religion Mr Ejaz-ul-Haq was guest of honour when he recently met with Shaykh-ul-Islam Dr. Muhammad Tahir-ul-Qadri in London, United Kingdom where he also visited the London branch of the International Minhaj-ul-Qur`an Organistation.

Mr. Ejaz-ul-Haq was on a visit of the United Kingdom when he caught up with Dr. Muhammad Tahir-ul-Qadri. Both men had a lengthy meeting in which religion and Pakistani politics were discussed in great depth as they had tea together.

Mr. Ijaz-ul-Haq said “It is an honour to be here with Dr. Qadri who is very knowledgeable person” He also said “This gives us the opportunity to share our views with each other in this visit”. Dr Tahir-ul-Qadri expressed his delight that Mr. Ijaz-ul-Haq could join him making this a special occasion. He also said that “Mr. Ijaz-ul-Haq has always been very supportive”

Later Dr. Tahir-ul-Qadri signed a copy of his recent Urdu translation of the Qur`an entitled “Irfan-ul-Qur`an” and gifted it to Mr. Ijaz-ul-Haq whilst posing for a photograph.

Mr. Ijaz-ul-Haq also visited the Minhaj-ul-Qur`an Centre, London where he met with the Director Allama Sadiq Qureshi, President Mr Ishtiaq Ahmed and Secretary Mr Abbas Aziz. He was also given a guided visit of the centre where he spoke to students attending evening classes at the centre and visited the Computer and Information Technology department. 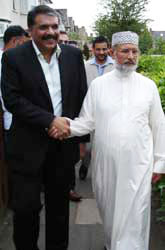 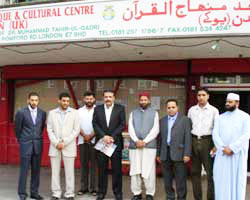 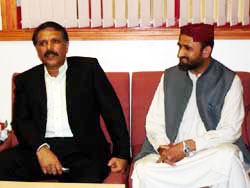 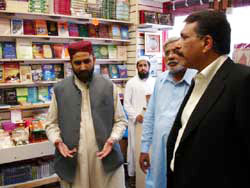