The Night Journey of the beloved, Mi'raj-un-Nabi (saw) 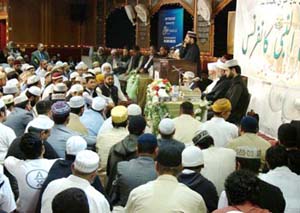 On the 20th August (27th Rajab 1427), Minhaj-ul-Quran International organised a heart-warming gathering, in the celebration and commemoration of the Holy Prophet's (saw) Night Journey, which was telecast LIVE by the prominent channel Q-TV. This extraordinary journey took place during the Makkan Period and in it there are many lessons to be learnt by the Ummah. These wisdoms and realities became clear as light, through the benevolence shown to us by his eminence Shaykh-ul-Islam Dr. Muhammad Tahir-ul-Qadri. 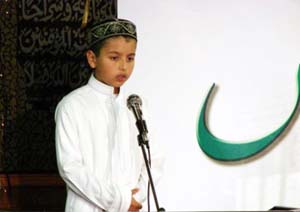 The gathering began with the recitation of the Holy Quran by Sahibzada Hamad Mustapha al-Qadri, and Qari Jameel saab. After this there was a few recitations of Naat- Poems of praise in the honour of Holy Prophet (saw). Dr. Zahid Iqbal, who is the co-ordinator of Al Hidayah did a briefing on Al Hidayah 2006, which is a annual spiritual retreat for British and western Muslim Youth held at a residential site in the UK. In his talk he stressed on the need of us gaining Hidayah [guidance], which is achieved though the Suhba [company] of the auliyah [friends of Allah], who possess connected chains of transmission back to Holy Prophet (saw). 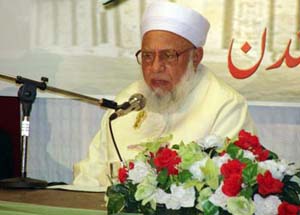 Al-Fadeelat al-Shaykh Muhaddith al-Shaam Muhammad Al-Saeed As-Sagharji was the special guest in this programme from Damascus, Syria. He is currently the head Imam of Jamia al-Umawi in Damascus, which was the headquarters of the Ummayyid Dynasty. Currently Shaykh As-Sagharji is the leading Faqih [Jurist] in Syria, he has authored several books. One of them is on the key evidences from the Qur'an and Sunnah proving the Hanafi Fiqh, which is called al-Fiqh al-Hanafiyyah wa Adillatahu, this book is in three volumes and is taught at the al-Azhar University in Cairo, Egypt. One of his teachers is al-Shaykh Ibrahim al-Yaqoubi (ra) who was one of the authoritative scholars of the previous century. This is the first time that Shaykh as-Sagharji has visited Britain for the purpose of Dawah.

The Shaykh delivered his lecture in Arabic, which was then translated by Prof. Nisar Ahmed Sulaymani, Imam of Hounslow Mosque. In his lecture, the Shaykh described the events of Isra, the Night Journey, from Masjid al-Haram to Masjid al-Aqsa. The Shaykh quoted the first verse of Surah Bani Israeel, 'Subhan aladhi asra bi abdihi laylah min al-masjid al-haram ila al-masjid al-aqsa aladhi barakna hawlahu linuriyahu min ayatina'. According to Shaykh as-Sagarji there is a difference of opinion amongst the scholars on which night is more superior Laylat al-Mi'raj [Night Journey and Ascension to Heavens] or Laylat al-Qadr [Night of Power]. The answer to this is that Laylat al-Qadr is superior in the sense that this is the most excellent night for the Ummah of Holy Prophey (saw), as they have a chance to have their sins forgiven. Whilst Laylat al-Miraj has its excellence as this night has its connection with Holy Prophet (saw). It was on this night that Holy Prophet (saw) led the other prophets in prayer and had met Allah (swt). The Shaykh ended by making dua for Minhaj-ul-Quran International and congratulated Shaykh-ul-Islam for his efforts. 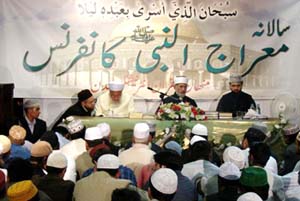 This journey was related to the outward physical dimension of Holy Prophet's (saw) bashariyyah [Humanity]. Holy Prophet (saw) came with a bodily form to this earth so that he may give us i.e. Mankind, fayd [blessings] in the form of hidayah [guidance]. This mi'raj relating to the bashariyyah was concluded when Holy Prophet (saw) led the anbiyah [prophets] in prayer and became their Imam. 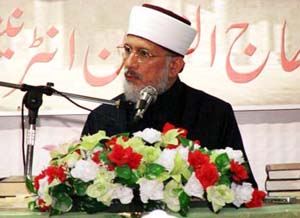 The second part of the journey, which is known as the Mi'raj, was from Masjid al-Aqsa to Sidrat al-Muntaha. This journey was in relation to the ruhanniyyah [spirituality] and nuraniyyah [the light] of Holy Prophet (saw). It was here at the point of Sidrat al-Muntahah that Holy Prophet (saw) became Sayyid al-Nur [Master of the Lights]; he became the leader of the whole of Alim al-Khalq [World of Creation] from the bashr [mankind] to the malaikah [angels].

In the remaining parts of the lecture Shaykh-ul-Islam went through many subtle points relating to the night journey. For example, a tafsir of the verses of Surah Tin was given. This tafsir [commentary] was unique, as Shaykh-ul-Islam was the first muffasir [Commentator of the Holy Qur'an] to relate these verses to Mi'raj.

In these verses Allah takes oaths by the tin [fig], zaytun [olive], tursinin [Mount Sinai] and the Balad al-ameen [The sanctified land]. The fig here relates to Sham [Syria], whilst the olive relates to the land of Falastene [Palestine], the Mount Sinai is the mountain in which Musa (as) talked directly to Allah, and the sanctified land is Makkah, from where the night journey started from. All these things that Allah has taken oaths from are all related to the Isra. 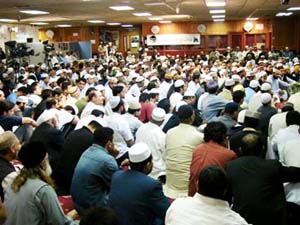 All praise is to Allah; this gathering was a great success in which over a thousand people participated. May Allah give us more opportunities to take part in such gatherings the future. Ameen