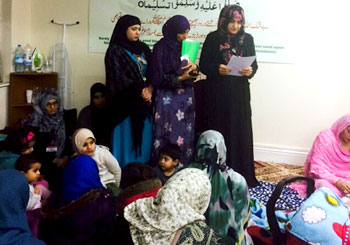 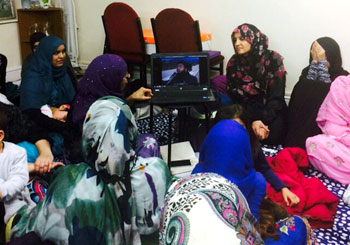 The gathering started with the beautiful recitation of the Holy Quran by Minhaj Youth League Nottingham’s Co-ordinator Sister Imra Hussain, followed by some Nasheeds from the audience. A speech about Shaykh-ul-Islam was given by MWL Nottingham’s president Sister Iram Qaiser and an English speech by MWL Nottingham’s general secretary Sister Shahreen Hussain. A speech regarding the Minhaj Dawah Project was given by Minhaj Dawah Project Manager (MDP) Sister Sadia Jahanzeb.

A part of the Ulama Mashaikh Conference UK video was played after which ladies were asked questions about life of Dr Tahir-ul-Qadri and were given DVDs as a prize for answering the questions correctly. A total number of 50 sisters attended the program.

The programme ended with a Dua done by the Dawah Secretary Sister Kosar who prayed for the long life of Shaykh-ul-Islam. Food and cake were served on the occasion.