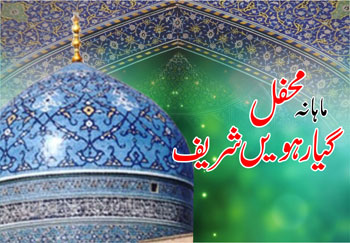 On the 4th April 2015 Minhaj Women League (Derby) organized a spiritual gathering to mark ‘Gyaarvi Sharif.’ The Mehfil took place at the Iklas Centre at 4 pm. The programme began with the recitation of the Holy Quran followed by lecture on CD by Shaykh-ul-Islam Dr Tahir-ul-Qadri. The speech was listened to attentively for 15 minutes. The event was attended by 40 women and 10 children. A Hamd and many Naats were recited. Some Naats were complemented by the Duff which many Sisters were attracted to and fascinated by. The programme was concluded by Zikr, Salaam and Dua. At the end of the programme, food was served.

On the 11th of April 2015, Minhaj Women League (Derby) scheduled another gathering at Ikhlas Centre. 13 Sisters and 2 children attended the programme. The programme began with the recitation of the Holy Quran. Durood Shareef was then recited for 10,000 in total. After this, Shaykh-ul-Islam Dr Tahir-ul-Qadri's talk on CD was played. Sisters listened to the speech very attentively. Following on from this, Naats were recited beautifully by many Sisters. The daff was played to complement some of the Naats. Zikr, Salaam and Dua concluded the Mehfil.