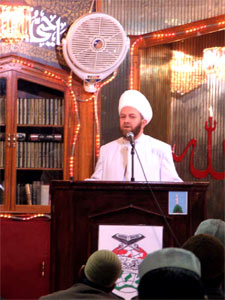 Shaykh Dr Muhammad bin Yahya al-Husayi al-Ninowy, one of the descendents of the Imam Husayn (radiyallah ta'ala anhu), visited Minhaj-ul-Quran International, London, to bless the participants with his noble presence on New Years Night. It was a spiritual gathering organised by Minhaj-ul-Quran Youth League, London. It aimed to keep distracted youths away from the amusements of the world and to enable them to participate in a setting which would bestow them with an enlightened heart. Many youth indulge in un-civilised behaviour during this night and a spiritual gathering in the house of Allah would be a great opportunity to divert their attentions towards their Creator. Roughly 500 brothers and sisters attended the function.

The gathering started around 9:00pm with beautiful recitation of the Holy Qur'an by Qari Jameel Suhrawardi and translation by brother Adheel Hamid who had studied at The Minhaj University for 1 year. This was followed by na`ts in Urdu by brothers Hafiz Usamah, Umar and Saeed.

Later brother Dawud recited some nashids celebrating the birth of the Messenger of Allah, Muhammad (saw) and praying for the Ummah in English. He warmed the gathering with his meek voice and brought life to the attendees. Thereafter, Sister Khadijah Atkinson, a revert to Islam gave her message about life and death, relating it to the recent tragic affairs which took place recently in Pakistan with the death of Benazir Bhutto. She spoke about her grief at the death of such a celebrated politician in the history of Pakistan. The death of Benazir is only a reminder of a fact that one day we will all die and no one is going to live for eternity. We have to face the fact that death is a reality and it must be faced and avoiding this fundamental truth will only bring disaster and misfortune. She related sayings of the pious about death from Imam al-Ghazali and its explanations by Sayyidi Shaykh-ul-Islam Dr Muhammad Tahir-ul-Qadri. 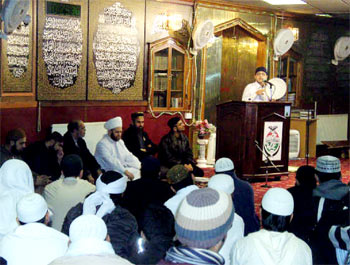 Thereafter Rabia, a young sister recited a nashid to welcome the honourable guest. She recited salawat on the beloved Messenger (s) from among those which were compiled by his eminence Sayyidi Shaykh ul Islam Dr Muhammad Tahir ul Qadri, called Dalail al-Barakat. This is the largest collection of salawat written in the history of Islam consisting of 10,000 salutations upon the Holy Prophet (s). The official welcome of the guest speaker was made by the amir of Minhaj-ul-Quran London, Shaykh Muhammad Sadiq Qureshi who gave a warm and beautiful reception, where he got the participants to show their love and enthusiasm. Shaykh Qureshi participated in the function with full concentration even though his mother had passed away earlier that very day. He ended his invitation with the Arabic poem, "Let every day be a Karbala" for the believers!

Finally, the moment came when the Shaykh spoke. He is a scholar of great repute, who has studied under some of the greatest luminaries of the age. From amongst his teachers are some of the Ghumari Muhaddithin of Morocco, ash-Shaykh `Abdullah Sirajuddin al-Husayni, the Ba'Alawi scholars, Shaykh `Abdullah at-Talidi, Shaykh Qaribullah of Sudan, the late Muhaddith al-Haramayn Sayyid Muhammad Alawi al-Maliki. During the introduction, brother Rafiq pointed out here that this is a link between the shaykh and Minhaj-ul-Quran because Sayyidi Shaykh-ul-Islam Dr Muhammad Tahir-ul-Qadri studied from the father of Sayyid Muhammad `Alawi al-Maliki, ash-Shaykh `Alawi ibn `Abbas al-Maliki. The Shaykh had travelled all over the Arab world for the sake of knowledge and graduated from the Faculty of Hadith Sciences from al-Azhar al-Sharif. 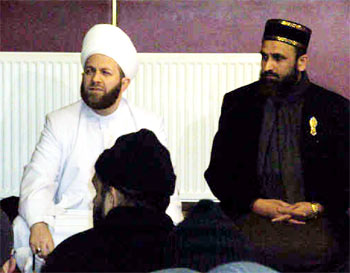 The Shaykh spoke many words of wisdom. He enlightened the participants with his gems, as well pulling light jokes to keep the seekers relaxed. He narrated a parable of the lion, the fox and the coyote. Each went hunting. The lion brought back a cow, the fox brought back a sheep and the coyote brought back a rabbit. The lion asked the coyote how it is to be shared amongst them. He replied that each should get its fair share. Straight away the lion swung his claws around the coyote's neck and he was no more. Then, the lion asked the fox. However, the fox replied, "For you, O king, you may eat the cow in the morning, the sheep during the day and the rabbit at night." The Lion was pleased and replied, "How did you learn to be so just!" The fox replied, "By looking at the coyote's head." Such parables only highlight the situation of the world we live where the powerful seek to force their understanding of justice whilst having no regards for others.

Other words of wisdoms which the Shaykh blessed the audience with was the nobleness of halal earnings. He taught the participants not to be unjust and to seek their provisions through halal means. Otherwise what they think is a profit will in reality turn out to be a loss. Such were the words of wisdom the Shaykh spoke that its effects still have an impact many days after. He highlighted the lives of Sayyida Zaynab citing examples of how she stood up to the tyrant, Yazid. He gave a brief story of al-Imam al-Hasan and then said, "I would consider it unjust not to mention al-Imam al-Husayn (`alayhis-salam)" following which he related the great imams bravery and noble conduct. He explained that the door of wilayah (sainthood) is always open and that this comes from the Ahl-ul-bayt. They were given responsibility of passing this on while others were given other duties.

The gathering ended with dhikr of the Kalima Sharif and recitation of a Qasida in praise of the Messenger of Allah (s) constructed in the style of Burdah Sharif. Also in the function was Muhaddith Muhammad `Ali, son of Shaykh Hasan ibn `Abdullah ibn Siddiq al-Ghumari who made the closing du`a.

The two scholars were then taken through an exhibition displaying information and photos about Sayyidi Shaykh-ul-Islam Dr Muhammad Tahir ul Qadri and the aims and achievements of Minhaj-ul-Quran International. Shaykh Niwowy whist ending the tour of the exhibition made a prayer for the organisation, its work and the founder. We too ask Allah to protect and preserve Sayyidi Shaykh-ul-Islam Dr Muhammad Tahir-ul-Qadri and wish for his movement, Minhaj-ul-Quran to fulfil all of its aims, Amin!