Conference On the Martyrdom of Syed Imam Hussain (RA) 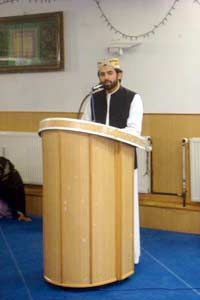 A conference on the martyrdom of Syed Imam Hussain (RA), in which a large number of sisters and youth attended, was held in Idara Minhaj ul Quran (Valby) arranged by Women & Women Youth League on Sunday the 20th January.

The conference was opened with an introduction from the host Hafiza Saira Hassan followed by a recitation of the beautiful verses from the Quran by sister Aisha Naseem, member of WYL, whereupon the Prophet Muhammad SAW was praised in a naat-e-kalaam recited by Hafza Shah and Javeria Shah. 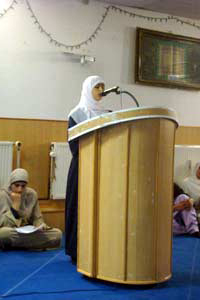 We were honoured by the presence of scholar Allama Afzal Saeedi from U.K. and Minhaj-ul-Quran Denmark’s speaker Allama Awais Qadri who enlighted us with their speeches and left us with a stronger attachment to our belief.

Among those who recited manqabats in the name of Syed Imam Hussain and the martyrs of Karbala were Sister Sameela Qureshi, former head of the Woman Youth League Shama Tauseef along with her sisters, whereas Salaam upon the Prophet was recited by the entire members of Woman Youth League.

In this conference the special part was that the youth was invited to give their opinions and impressions on the topic as this Islamic tragedy is not only remembered to condemn Yazeedi but if taken in consideration there can be made several approaches to the topic that are equally important. Hence 4 sisters were invited to share their thoughts with us on the stage, as the first one we have Sister Warda Yaseen as the youngest with an age of only 8. She enlightened us with a description of Imam Hussain (RA)’s traits in Urdu. Sister Binish, a 10-year-old, spoke about the happenings at Karbala in Danish. Accordingly, Sister Haleema Uppal spoke of the importance of love to Ahl-e-Bait and finally, Sister Nargis Zahoor (WYL, Info. Secret.) enlightened us with the importance and advantages of fasting at Ashura among other 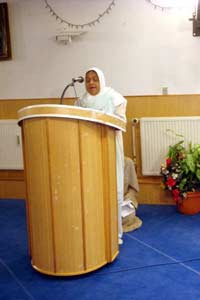 subjects. MashaAllah their beautiful words and expressions of love for the Prophet Muhammad (saw) and Ahl-e-Bait mesmerized the whole crowd.

Finally, Mrs. Rahat Yaseen (associated with the Pakistani Embassy) was invited to conclude the program and make dua. She concluded the details of the program in beautiful words and said that Minhaj-ul-Quran’s Woman League and Youth League should be used a platform to gain training and improvement in an effort of waking up from ignorance. All the problems that are facing today can be solved only by Muslim Women and no others. If we make an intention today of making an improvement and giving our children an upbringing like Imam Hussain (RA) and Syeda Zainab (RA) then all the further problems will not be able to affect a Muslim.

After dua the sisters bought lectures and DVD’s etc. of Sheikh-ul-Islam from the mosque’s sales center to awake their beliefs and making arrangements for improvement of their beliefs. At the end of the program there was made arrangement of food for the sisters. 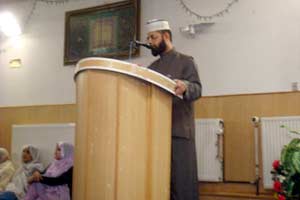 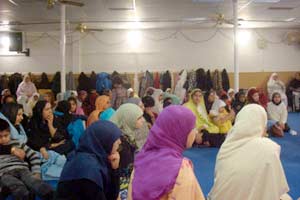 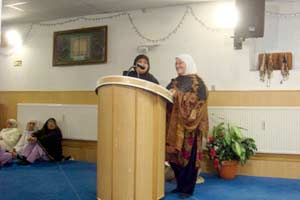