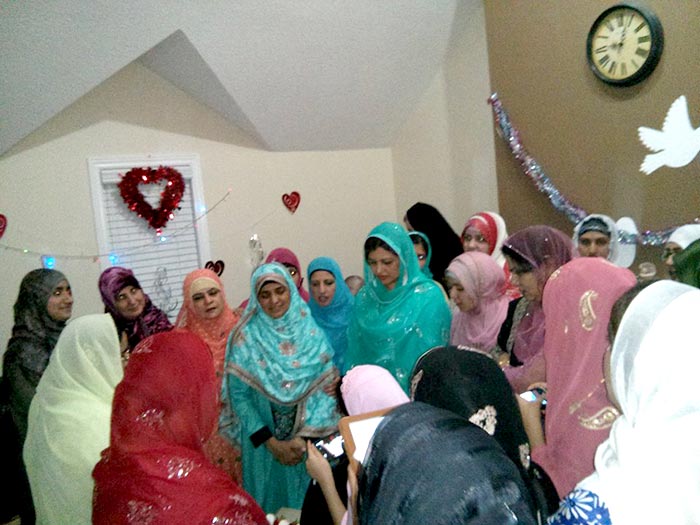 By the grace of Almighty Allah and the blessings of the beloved Holy Prophet Muhammad (SAW), a farewell dinner in honour of Sr. Faiza Qadri was held in Mississauga Canada. The blessed event held at MWL- Canada President Sr. Razia Syeda’s house included a Milad-un-Nabi program in the evening of 14th February 2014. This event was the last event in which Sr. Faiza Qadri spoke at before moving to the USA.

The event was a tremendous success with all the participants, organizers, leaders and parents attending to make it victorious. The atmosphere of the program was welcoming for those that attended and a sense of spirituality was felt. Collective Durood Shareef was also recited.

The program’s mood got set by a beautiful recitation of a surah read by Sr. Areej Syeda. Sr. Shabana Mughal created a warm welcoming atmosphere with her melodious voice reciting the Hamd. Special requested naat performers from Scarborough – Sr. Saeeda, Sr. Shazia, and Sr. Nuzhat - enlightened the house with their harmonious voice singing a variety of beautiful nasheeds that got the guests to be in the Milad-un-Nabi spirit. Sr. Sajida took the stage and read the Qaseeda Burda Shareef in the most pleasant voice. General Secretary Minhaj-ul- Quran Women League- Canada Sr. Shabana Mughal recited a few beautiful Nasheeds in her mesmerizing voice; requests were also taken for the nasheeds. Sr. Zunaira and Sr. Mahnoor from Minhaj-ul-Quran’s Youth League also participated and read a Nasheed. 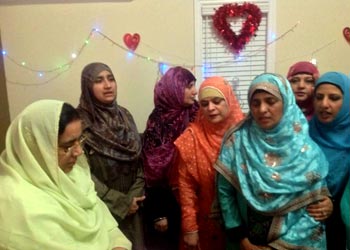 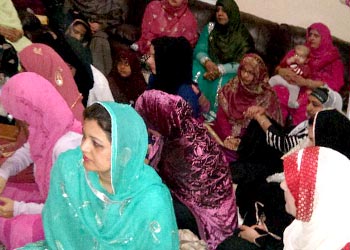 The anticipated speech was taken place after the collective nasheeds by re-known Scholar Sr. Faiza Qadri from UK. She delivered an interesting informative speech regarding the love of our Holy Prophet SAW and the miracles performed by the Holy Prophet SAW. She also discussed the importance of loving our beloved Holy Prophet Muhammad SAW, loving his SAW’s family, and loving the Awliya Allah (friends of Allah). She indicated that even if one Muslim is involved in offering many prayers, performing Hajj, giving charity and fasting persistently, one still isn’t considered a Mu’min unless he/she has good character and good morals. She went on to say how “revolution starts from your own personality”.

She emphasized the guidance of Shaykh-ul-Islam Dr. Muhammad Tahir-ul-Qadri that there are two aspects that make a person perfect in their life and successful in all endeavors which are Adab and Khidmat (Respect and Serving others). She also mentioned the importance of unity and love in life for all Muslims.

Salam was collectively read, and dua was done by Sr. Sobia Fawad. Overall the Program was a huge success, the audience was immense with three of the former Minhaj-ul-Quran Women League-Canada Presidents attending, Sr. Shabnam Zafar, Sr. Shahida Malik and Sr. Naheed Siddique. The other guests included Sr. Sobia Fawad, Sr. Huma Muneeb, Sr. Nosheen Amjad, Sr. Saima Zahid and Sr. Zunaira Chaudry. Many other sisters also attended from in and around the neighborhood.

In the end cake was cut to celebrate the Milad-un-Nabi program.