Muharram-ul-Haram : Veneration for the esteemed family of the Holy Prophet (saw) 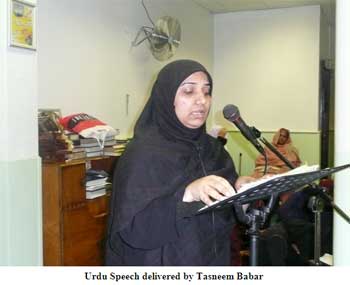 During the month of Muharram-ul-Haram, Glasgow Minhaj Women League organised a programme in remembrance of one of the most significant events in the history of Islam; the martyrdom of Imam Hussain (ra). In this gathering over 250 women attended from different areas of Glasgow and other sisters traveled from Edinburgh to be part of this blessed event.

The program began with Sister Tasneem Babar reciting a Surah from the Holy Quran. This was followed by the host of the event, Sister Ambreen Mehmood (ICIS graduate), welcoming all the sisters. The programme then was beautified with the young girls from the Glasgow Minhaj Nasheed Council reciting different Nasheeds to illuminate the love of the 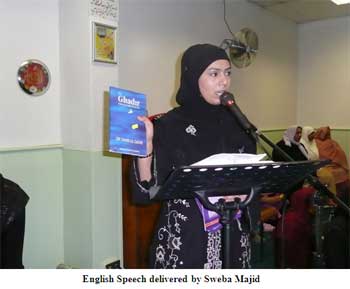 Sister Ambreen then invited Sister Sweba Majid (ICIS graduate) to come on stage and give her talk in English. Sister Sweba firstly talked about the tragedy of the assassination of Benazir Bhutto and how everyone should recite surah Al-Fatiha on behalf of her. She then continued her talk regarding the love for Ehle-bayt. She stated no matter how good our deeds are, one will remain a hypocrite and will be deprived of Iman if they don't possess true love for Ehle-bayt, with regards to this she included many Ahadith (sayings of the Holy Prophet (saw)) supporting her point. She then later re-enforced that the despicable Yazid cannot be classified as a Muslim, as he martyred the family of the Holy Prophet (saw), no act can be worse than the one the retched Yazid committed. Again for this she provided many references from Ahadith.
Sister Ambreen quoted various Quranic 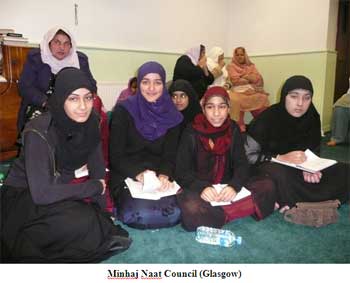 verses/Ahadith/poetry throughout the programme to make everyone aware what Imam Hussain (ra) did for Islam and also to emphaise his esteemed status through the Ahadith.

Some other sisters from the audience came to read nasheeds/manqabats. The Glasgow Nasheed Council were again called on stage, this time they sang praise of the family of the Holy Prophet (saw).

The last part of the programme was a talk in Urdu for the benefit of the Urdu speakers within the audience, this was by Sister Tasneem who talked about possessing love for the family of the Holy Prophet (saw) and also emphasised the esteem status of Iman Hussain (ra) in the light of Ahadith and the Quran.

Finally, the programme came to an end and greetings and salutations were sent upon the beloved Holy Prophet (saw) and his (saw) beloved family (ra). 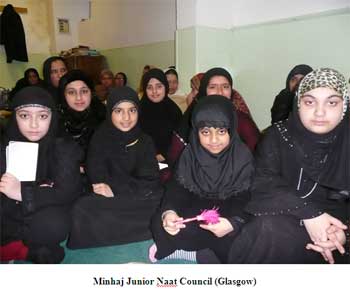 As the programme had ended, time was allocated to stall which was promoted at the beginning by Sister Sweba and Sister Ambreen. It included lectures/books written by Shaykh-ul-Islam Dr Muhammad Tahir-ul-Qadri and various other Islamic material including nasheed CD's and Nasheed books. The programme concluded with distribution of food and drink to all the participants.