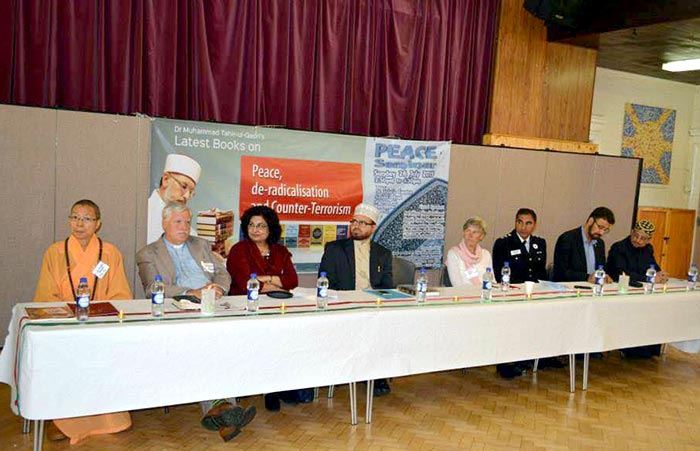 On 26th July 2015, a Peace Seminar was arranged by Minhaj-ul-Quran International Manchester. The Seminar was held as a first initiative of this type in this area and to raise awareness of the recent initiative of Shaykh-ul-Islam Dr Muhammad Tahir-ul-Qadri in launching the most comprehensive Peace and Counter-Terrorism Curriculum and supporting course materials and books.

The representatives were invited from various faiths, as well as local, national and European Parliamentary representatives and representatives from the Police authorities. The main speaker at this Seminar was our senior scholar Professor Nisar Ahmad Hussain Sulaimani, who is presently Head of Islamic Department at the Emirates International School in Dubai, UAE, and a former Ameer of Minhaj-ul-Qur’an International UK. 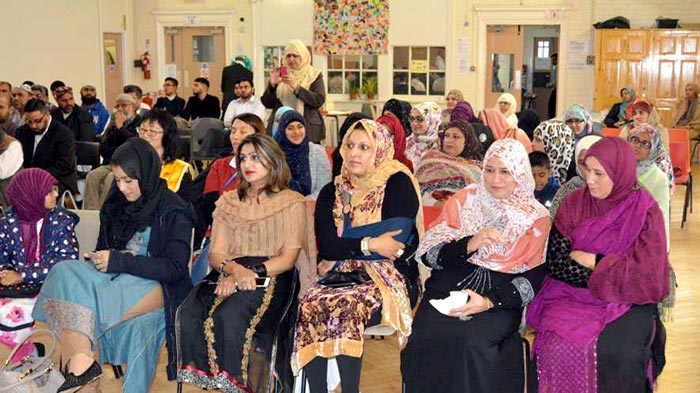 The Seminar’s proceedings were conducted by Hussain Ali Qadri (MYL Gt. Manchester). The proceedings commenced with a welcoming address by Shaykh Muhammad Haroon Abbasi (Ameer Minhaj-ul-Quran, Manchester) as well as recitation of the Holy Qur’an. Shaykh Abbasi commented that the reason for this seminar being arranged was to foster dialogue, awareness and understanding amongst our communities. He further stated that Islam teaches us peace and harmony and that Minhaj-ul-Quran is wholeheartedly committed to putting smiles on faces and bringing our communities together.

Hussain Ali introduced each of the guests and invited them to the stage. Then the Venerable Miao Dou, Buddhist Faith Leader and senior representative of the Buddhist Centre, Old Trafford, Manchester, was invited to address the seminar. She gave a brief and concise message in respect of the Buddhist perspective on Peace and the teachings of Peace propagated by the Buddhist faith. She ended her address with a prayer from Buddhist literature where she was joined by members of her congregation. She was very appreciative of the Peace Seminar and thanked the organizers for creating awareness of peaceful living.

Umer Khan, Chief Inspector (Cohesion) Greater Manchester Police Services then delivered a talk on the need for peace, cohesion and integration in our communities underlining these to be critical steps in our fight against the extremist elements that turn to terrorism and extremism. Umer Khan referred to his work in the Gt. Manchester area and was particularly appreciative of the work of Shaykh-ul-Islam in the preparation and launch of the Peace and Counter-terrorism Curriculum for the UK. He also thanked the organizers for the event and expressed support for further similar initiatives whenever arranged.

Shaykh Pirzada Sardar Ahmad Qadri, a lawyer and renowned religious and community leader and Prison Chaplain, spoke on the responsibility of Muslims in Britain to remain law abiding citizens. He spoke with particular reference to his role in UK prisons and the disproportionate number of Muslims presently found in the prisons. He addressed the need for greater education and awareness of the basic values of peace and lawful existence as the basics for any prosperous society. Shaykh Sardar Qadri appreciated the work of Minhaj-ul-Quran in promoting dialogue for peace and harmony.

Mr. Tarpal Singh – Sikh Faith Leader and Head Priest for Guru Nanak Devji Gurdwara, Manchester, attended with his delegation and brought a light hearted perspective to the Seminar, with a short sharp message in Punjabi. His message of peace, simplicity and communal regard was later translated into English for the audience by a member of his delegation. 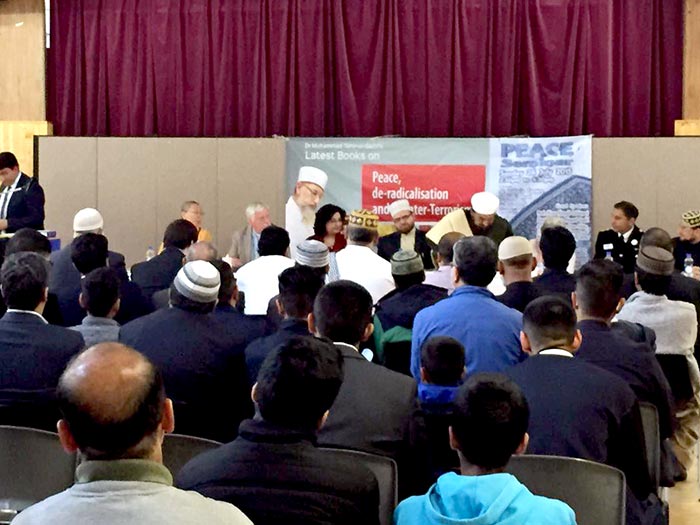 Ms. Qaisra Shahraz - Vice-Chair for FNFM, Vice-Chair for FNFM and Manchester Multi Faith Centre also, Inspector & Education Consultant, a Novelist and Director, gave a brief presentation of her experiences in bringing communities together. She elaborated on her work between the Muslim and Jewish communities in particular. Ms. Shahraz appreciated the work of Shaykh-ul-Islam for Peace and Counter-Terrorism and paraphrased Shaykh-ul-Islam’s quotation that ‘Terrorism has no religion’, it needs community development to tackle its causes.

Rt. Reverend Phil Rawlings of the Church of England, and Coordinator of the Centre for the Studies of Christianity and Islam at Didsbury College, warmly welcomed the Peace Seminar and relayed his experiences in Pakistan and real-life examples of the need to address the root causes of potential terrorism. Reverend Rawlings gave the message of peace from a Christian perspective and highlighted the need for our communities to appreciate one another’s beliefs and efforts. He was appreciative of the work of Shaykh-ul-Islam for de-radicalisation and counter-terrorism and expressed his desire to utilize the peace Curriculum of Shaykh-ul-Islam.

Hassan Ali Qadri – Muslim Youth League (UK) representative and student of Politics in the UK, spoke on the work of Minhaj-ul-Quran to defeat the evil of radicalization, extremism and terrorism. He referred to media and governmental responsibilities in creating a better society, and the leading role being played by Shaykh-ul-Islam in raising awareness of Peace initiatives.

Mr. Mohammed Shafiq, Chief Executive of the Ramadhan Foundation & Political Editor at Ummah TV channel, gave a brief but precise analogy of the need to develop awareness of peace initiatives. He was particularly appreciative of the works of Shaykh-ul-Islam over the years and also the work of Minhaj-ul-Quran in the UK. Mohammed Shafiq asked the organization to continue its efforts in this area.

Rt. Hon. Kate Green (Member of UK Parliament) and Shadow Minister for Works and Pensions, spoke of how happy she was that this Seminar has been arranged in Old Trafford, Manchester, as this is one of the most diverse communities in this area. She appreciated and showed the highest regard for the work of Minhaj-ul-Quran and Shaykh-ul-Islam in providing an opportunity and forum for diverse communities to come together and discuss peace, harmony and unity. Kate Green was also appreciative of the willingness of the Muslim and other communities in the Manchester area to come together and create a better living environment. The audience showed great appreciation for her views and encouraging participation. She was duly thanked for attending the program from the start to the finish.

Professor Nisar Ahmad Hussain Sulaimani, who is presently Head of Islamic Department at the Emirates International School in Dubai, UAE, and a former Ameer of Minhaj-ul-Qur’an International UK, delivered the main talk of the Peace Seminar and addressed the fundamental challenges to our societies in developing greater understanding, cohesion, peace and awareness of each other’s beliefs. He encouraged initiatives in this regard and specifically detailed the work of Shaykh-ul-Islam as a recognized Global Ambassador for Peace in these modern times.

Referring to the Peace and Counter Terrorism Curriculum, Prof. Sulaimani asked the attendees to utilize the contents and the supporting material to educate communities on the true teachings of Islam, the faith of Peace for all. He further stated that now communities have a responsibility to come together and share gatherings, events, meals etc. and bring down unnecessary barriers and promote the wider concept of communities within the diverse makeup of the society of the UK. He asked the government representatives to remove the word Islamic from any reference to terrorist groups, as in his words these are not ‘Islamist’, but, rather they are ‘Devilist’, and this is how they should be referred to. 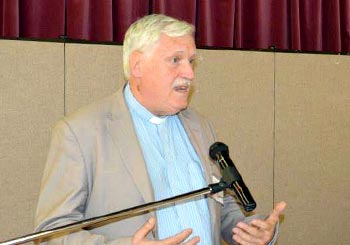 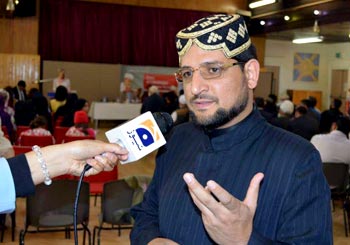 The Professor thanked all the attendees and ended his talk by asking all faith, community and government leaders to stand together on stage and also the audience to stand and join him for a specially prepared Community Peace Prayer. This was an emotional moment for members of the seminar and all participated with passion and a sense of unity. The wording of the Community Peace Prayer was as follows:

The final talk of the seminar was delivered by senior Politician, former Lord Mayor of Manchester and Member of the European Parliament, Rt. Hon. Muhammad Afzal Khan. He spoke with passion and emotion on the need for greater awareness of peace on a community, administrative, government and international relations level. He was highly appreciative of the talks in the seminar and particular of Prof. Sulaimani’s message, whilst also paying rich tributes to the work of Shaykh-ul-Islam in promoting the need for de-radicalisation, and combating extremism and eliminating the root causes of terrorism. He was able to give moving real-life examples of how lives have been destroyed by terrorism in communities, and societies around the world. He asked that the communities should also raise awareness of state terrorism that is seen in many areas of the world and raised particular concerns for the continued state-sponsored terrorist atrocities in Kashmir, Palestine, Burma and other areas of the world.

The major output from this seminar was community awareness of the Peace initiatives launched by Minhaj-ul-Quran and in particular by its leader Shaykh-ul-Islam Dr. Muhammad Tahir-ul-Qadri. The road map offered by this seminar was presented by the main speaker as the need to develop long term community initiatives and bring together communities to share each other’s hospitality, socially and regularly. By reducing these barriers, we will play a major part in eliminating the potential root causes of extremism and terrorism from our societies.

Br. Hussain Ali Qadri reminded the attendees and guests of the Peace and Counter-Terrorism Curriculum authored by Shaykh-ul-Islam, and the need to utilize these resources, wherever possible.

Shaykh Muhammad Haroon Abbasi Al-Azhari concluded the Seminar by thanking all guests, attendees and organizers. He thanked the selfless efforts of Sister Gulnar and her team from Minhaj-ul-Quran Manchester, and the efforts of the Members of Minhaj-ul-Quran and the Muslim Youth League from Ashton-Under-Lyne, Manchester and Oldham in assisting Minhaj-ul-Quran Gt. Manchester to arrange and hold this landmark event. The work of Hussain Ali Qadri in conducting the stage proceedings was greatly appreciated by all. 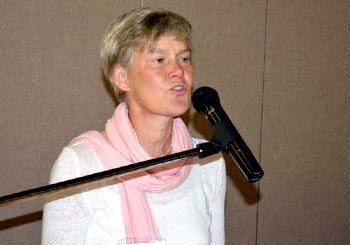 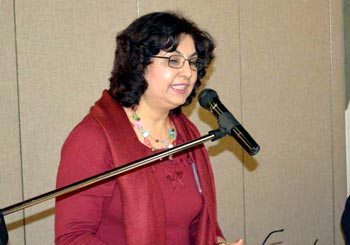 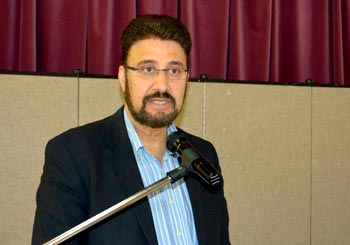 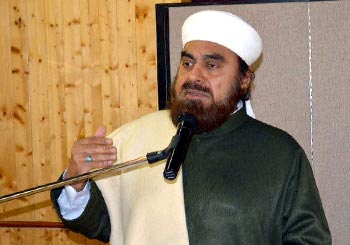 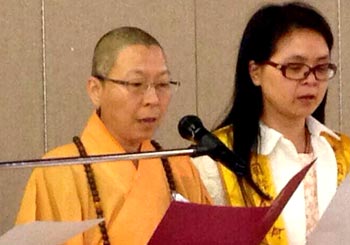 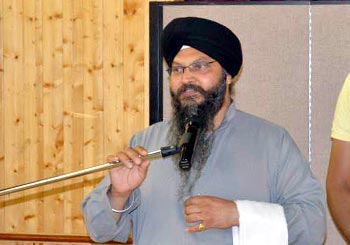 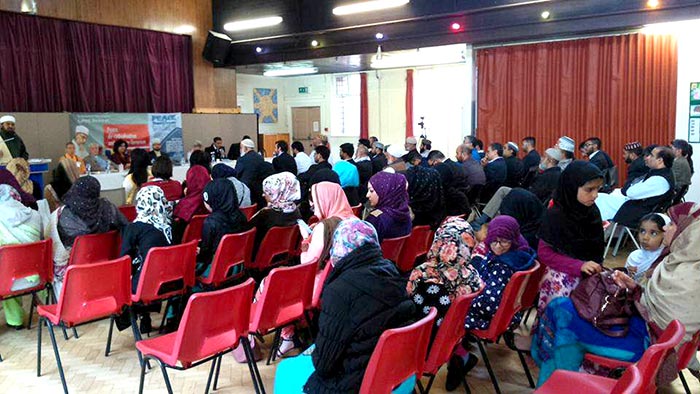