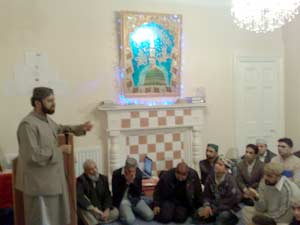 Allama Shahid Babar hosted the gathering and started off by reiterating the reason for the gathering and made a special supplication for the long life and well being of our beloved Shaykh and also prayed that we become firm upon the Mission and be the way our Beloved Shaykh wants us to be. He then invited Hafiz Ilyas to commence the Mehfil with the recitation of the Glorious Quran, and enlighten our souls with the words of our Lord.
After the Tilawat, various people were invited upon stage to recite Naats (praises of the Beloved Messenger (SAW)).
After the Naat recitation as the Mehfil was a birthday celebration there were a few games and quizzes organised:
Firstly, there was a Q&A between the kids who were asked various Islamic questions covering topics they had learnt through their studies at the Idara. The team that won got a prize as a source of encouragement for themselves and as an incentive for others to learn more about the Deen of the Beloved Messenger (SAW).
Secondly, there was Musical Chairs … but not for the kids! The male member’s of Minhaj-ul-Quran Glasgow participated in this light hearted fun. However, it is safe to say that the kids enjoyed watching it as much as the men enjoyed playing it. Again there was a prize for the winner. 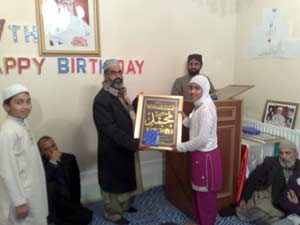 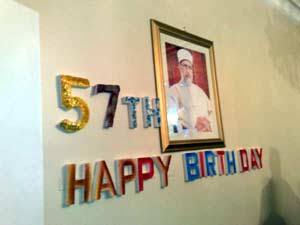 After Muhammad Milad Raza Qadri’s performance, Allama Shahid Babar invited Tahir Mohammed, Secretary General (NEC UK), to the stage to say a few words. Tahir Mohammed stated that we were here to celebrate the birth of our beloved Quaid but we should look towards our Quaid and see his true personality. He then stated a few words in regards to Dawah work of the Mission and reiterated the message that we should do Dawah through the lectures of Huzur Shaykh-ul-Islam. He stated that it does not cost much to buy one lecture and if we have finished listening to it we should pass it on to our friends and those that we know so that they may benefit as well.
Allama Shahid Babar then invited Abdul Wahid, President Minhaj-ul-Quran Scotland, Riza Akhtar, Secretary General Minhaj-ul-Quran Glasgow, and Tahir Mohammed, Secretary General, (NEC UK), to cut the birthday cake of Huzur Shaykh-ul-Islam, which was made by Sister Tasneem Babar.
The Mehfil ended with the tarana ‘zulmat-e-afaq mein chamke ga Tahir Qadri’ and Dua for the long life of our Beloved Quaid and his well being. Finally, food was distributed courtesy of Minhaj-ul-Quran Women League Glasgow. 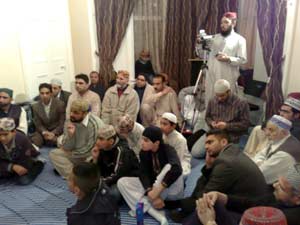 May Allah bless our Quaid with a long, happy and healthy life and May Allah fulfil his dream of Mustafvi Inqilab as soon as possible through the Wasila of the Nalein-e-Pak of the Beloved Messenger (SAW). May Allah bless us and help us be the way our Quaid wants us to be so that we may be able to bring a smile to our Beloved’s face, ameen.