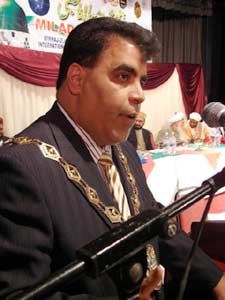 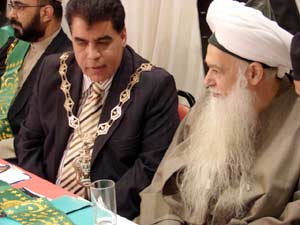 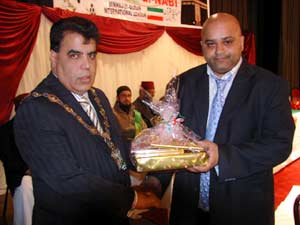 Shaykh Ahmad Babikir al-Sudani a teacher at the ex-pop singer Cat Steven’s Islamic School in London, speaking about Mawlid festival, said: “We see people narrating his biography, giving descriptions of his blessed appearance and singing the praises of the messenger of our Creator Almighty.” Shaykh Babikir also said we live in difficult times and the most destructive thing is Muslims fighting one another “The prophet came to unify mankind and to achieve this we need to save ourselves from certain teachings.” said Shaykh Babikir.
Shaykh Babikir said Muslims who force other Muslims to practice their version of Islam is wrong. Islam is about peace and equality – to share things and not to be selfish. He said: “We are fighting; pointing fingers by saying you are wrong we are right. Do not prove yourselves to be better than others. This was never the way of the noble Prophet. We must work to promote peace and harmony. Read the divine scripture, the Qur’an you will find the message of peace, dignity and unity and to live our life in peace.” 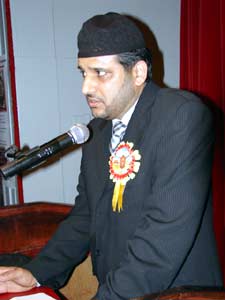 Mayor of Waltham Forest Mr Liaqat `Ali, said: “The birth of the Prophet is celebrated with a message of peace and I am proud to be a Muslim and to be the mayor of Waltham Forest. I am proud to be here and to meet such lovely people.” Mayor `Ali speaking about the event, said: “It is important that we have such events, to know about the Prophet’s message of peace which certainly needs to be taken out to the masses.” He added: “There certainly would have not been any Qur’an or Islam without Prophet Muhammad –the greatest prophet”
Ishtiaq Ahmad, president of Minhaj al-Qur`an International centre in East London, told listeners: “I welcome everyone to our annual Mawlid function, to mark the blessed birth of the best of creation Prophet Muhammad.” Mr Ahmad also said: “We believe through commemorating Prophet Muhammad’s birth we can establish a special bondage of love and affection with the Prophet. Through the Prophet’s message of peace we can make the world a peaceful place to live in”
Among those who performed at the celebration included: the famous Muslim band “Ashiq al-Rasul” – Prophet’s Lovers of Birmingham, internationally acclaimed poet “Hasaan al-Minhaj” – Way of Beauty, Muhammad Afzal Noushai of Pakistan and a young group of girls “Minhaj al-Madina” – Gateway to Madina of London. 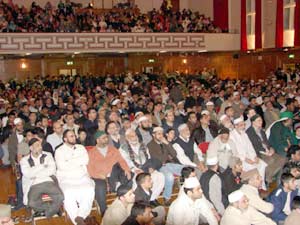 As the conference drew to an end a crowd at Walthamstow Assembly Hall jostled to meet Shaykh Hisham al-Kabbani as the supreme Naqshbandi spiritual leader was swiftly escorted to his awaiting vehicle. Hundreds also took bayah – spiritual pledge of allegiance with the Shaykh prior to his departure from Waltham Forest town hall.
Chief organiser of the Walthamstow event, Khurram Shazad said: “Today’s event has been very successful. I thank everyone from the inner depths of my heart. I especially would like to thank Mayor Liaqat `Ali for being with us. I also thank our local councillors, community and faith leaders, local authority, metropolitan police and all those who supported us.”” 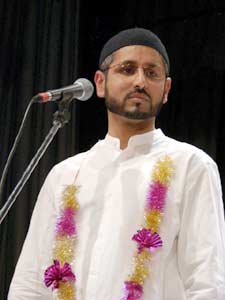 Rafiq Ahmad who heads the Muslim Youth Forum in Walthamstow, said: “A hugely successful function which has brought together a wide range of people to remember the life of the Prophet. The event has helped in serving the community by taking youth who would have been loitering in the streets and giving solace in this spiritual gathering.” Mr Ahmad also, said: “People of different races, Muslim denominations, local community and various faith leaders shared the stage to speak about the honourable conduct and teachings of the chosen one whose advent was foretold by Abraham, Moses, and Hindu scriptures and in the New Testament by Jesus.”
External Affairs Secretary of Minhaj al-Quran International centre, Muhammad Asif Shakoor, said: “We are delighted so many people took part in the celebrations at Walthamstow Town Hall. It certainly has been a very difficult task in arranging our overseas guest his Excellency Shaykh Hisham al-Kabbani to attend this beautiful function. I thank him for taking time out of his busy schedule to be with us here today. It certainly is gives us great honour to have such a renowned spiritual leader to be with us.” 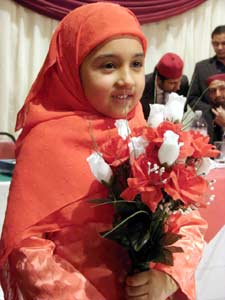 The festival of Mawlid al-Rasul – birth of the messenger Muhammad falls on 12th of the Islamic lunar month of Rabi al-Awwal. The festival is celebrated throughout the Islamic world and is a national holiday in Egypt, Syria, Lebanon, Jordan, Somalia, Morocco, Tunisia, Sudan and numerous other Muslim countries. Some of the largest gatherings are held in the Indo-Pak subcontinent cities of Lahore, Karachi and Hyderabad with a attendance of a million or more people. The festival is also marked in Turkey and Saudi Arabia. The earliest celebrations of the Mawlid festival date back to the 3rd century of the Islamic lunar calendar. Among the most remarkable public commemorations were held around the time of King Saladin – The Great. Traditionally the festival is celebrated through distribution of alms to the poor and destitute, serving food, displaying ornaments and decorations in celebration, street processions, performing acts of righteousness and the recitation of litanies.
This report is NOT subject to copyright laws and may be utilised by the local press. You may print, copy or utilise it for research, if the latter, please notify us beforehand.
Muhammad Asif Shakoor
Media & External Affairs Secretary
Minhaj al-Quran International centre
London, UK