Annual Milad-un-Nabi (peace be upon him and his family) Event Halifax, UK 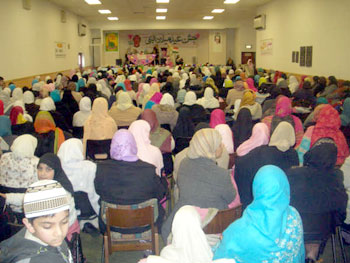 The Event started with the tilawwat and recitation of Nasheeds by the young girls who attend the Al-Minhaj Home Educational Project. The guest speakers were Sister Khadijah Zahid (London) who delivered an inspirational speech in English and Sister Faiza Qadri (London) who delivered a thought provoking speech in Urdu.
During the event sister Tahira Akhtar (President, Minhaj-ul-Quran youth league, Halifax) talked about the activities run in Halifax. She explained that the Al-Minhaj Educational Project Halifax has been running for 3 years and also highlighted that there are three groups.

The first is group 1, which is for girls aged 6 to 10. In this group the girls mainly learn about the basic teachings of Islam. They also draw Islamic pictures; colour as well as learning Naats. They are also learning 40 Hadith's and how to read Namaz. 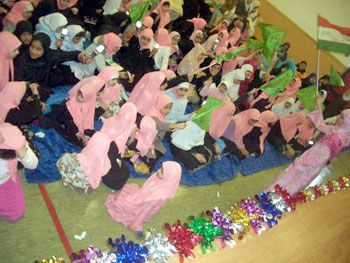 Group 2 is for girls aged 11 to 14. This group mainly does project based work around issues like the Hijab, the Prophets life, parents etc. They have also been working from a 40 Hadith book and are now in the process of memorising all 40 Hadith's of the Prophet (saw). They are currently going through a book written by Shaykh-ul-Islam Dr. Muhammad Tahir-ul-Qadri called Dhikr and Dhakireen. Groups 1 and 2 have been running for over 3 years now.

Group 3 is a study circle group, which is for girls who are 15 and over. This group was started recently due to a demand from older girls. It has only been running for 6 weeks. In this group we discuss issues such as the importance of wearing the Hijab, Modesty, men and women relationships, free mixing with the opposite gender, Importance of respecting parents, Dating, Marriage etc.

The classes are run under Minhaj-ul-Qur'an Halifax. Group 1 and Group 2 run at 12pm until 2pm and group 3 runs at 2pm until 4pm every Sunday. All groups also get a chance to learn Naats and do Zikr. The groups also watch a 10 to 15 minute video clip of Shaykh-ul-Islam Dr. Muhammad Tahir-ul-Qadri in English. After each clip we discuss what we learnt from the lecture. The students also take notes. At the moment we are watching the Al-Hidayah 2006 lectures, which are devised into 10-15 minute lessons. Before each clip a naat is recorded in order to encourage the girls to recite naats. We also have an Al-Minhaj Home Library where the students are free to borrow books and videos.

We have a team of 3 sisters who run the classes. These include Sister Tahira, Sister Safora and Sister Safyah. We also encourage girls from the class to become monitors and help around the class. These classes only run through the blessing of our great teacher Shaykh-ul-Islam Dr. Muhammad Tahir-ul-Qadri. Without these blessing we would not have this great opportunity.

A special announcement was also made about the establishment of the Al-Minhaj Youth Club for Boys, Age 10 to 16 years. Which will include Sports activities, Naat competitions and other Activities in an Islamic environment. This club was established due to a lack of Islamic activities for young boys in Halifax. The Al-Minhaj youth club is divided in two groups. Ahmed Hussain, aged 10 years, is in charge of the first group and has 4 assistant helpers. Ahmed Hassan, aged 15, is in charge of the second group; he also has 4 assistant helpers. Both groups have regular meetings amongst themselves to discuss the relevant activities, which should be organised. They then have a meeting with the president of Al-Minhaj Home Educational Project, Javid Akhtar. 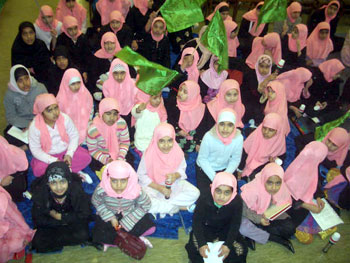 Later during the day sister Khadijah and sister Faiza visited the Al-Minhaj Home Educational Project, residence of Jamila Akhtar (President, Minhaj-ul-Quran women's league, Halifax). They were impressed at the facilities provided for the youngsters in Halifax and were amazed at the amount of work being done at home and the fact that all the work is done on a voluntary basis. The students are also not charged any fee.

On the 23rd March 2008 the Minhaj-ul-Quran Halifax Team organised the Ziyarat of the Blessed Hair Mubarak of our Beloved Prophet Muhammad (peace and blessing be upon him and his family). The Ziyarat was for both men and women. This took place at the Jamia Ghosia Mosque in Halifax. This was a truly enlightening experience for everyone.