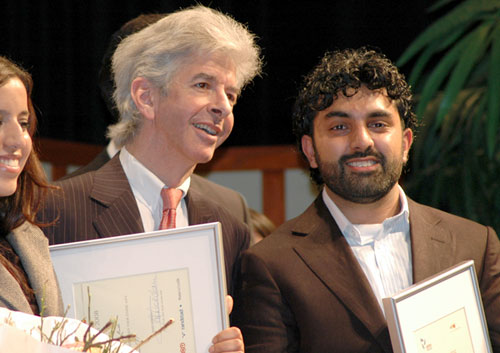 In April the annual ECHO Awards were awarded to the top talent among the Dutch immigrant students. Computer Science student Faisal Mirza of The Hague University won the Technology Award. He received the prize from Mr Plasterk, Dutch Minister of Education, Culture and Science.

Faisal Mirza, life-member MQI, was nominated because of the fact that he is co-founder of MashriQ, a Muslim students association at the The Hague University and the Erasmus Rotterdam University. He is well known for his active role in Al-Hidayah holland, a branch of MQI. Besides that he also founded the successful website Wijblijvenhier.nl for Muslim writers in The Netherlands and he contributed as a tutor for fellow students at The Hague University. Faisal gives a positive contribution to the dutch society in an intelligent way.
The ECHO Award was awarded for the 8th time and puts the spotlight on the successes of talent in higher education. The Award gives those successful individuals positive attention. Faisal Mirza received a scholarship for a summer course at the University of California, Los Angeles. He chose to study English and Public Policy starting 22th of June.