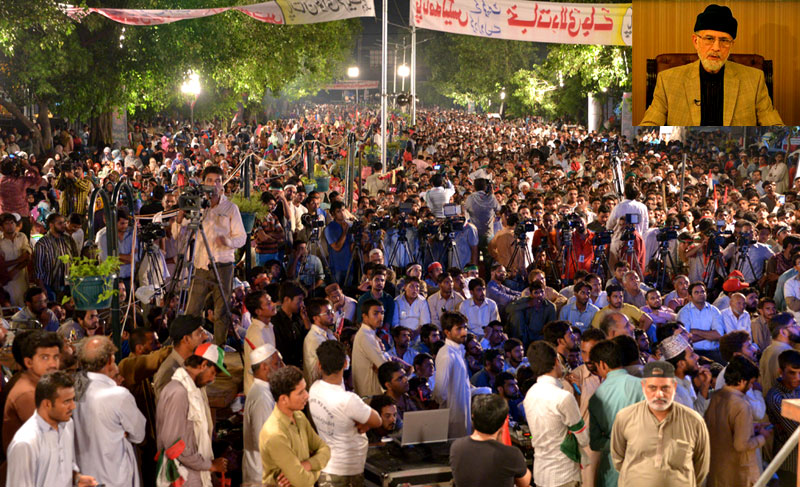 Addressing the protest demonstrations and sit-ins held in 105 cities under the banner of PAT on August 20 from the central secretariat via video link, PAT Chairman Dr Muhammad Tahir-ul-Qadri has said that the Sharif family should beware that we can take the revenge of June 17 within 7 days but he taught peace all his life and the hands of the workers are tied. He said that Punjab is ideological capital of terrorists, asking that terrorism came to an end from Waziristan, when will it end from Punjab? He said that India brought Nawaz Sharif into power, adding that he is aware of the countries that played their role in installing him in power.

Dr Tahir-ul-Qadri said that the work had started internationally well ahead of General Elections 2013 to bring Nawaz Sharif into power. He said that if his revelations are contrary to the reality, then the Pakistan Army and the national security institutions should refute his facts, he would consider that his information was not correct. He asked the Prime Minister to stop sending the delegations to him for pardon, stating that the Qisas is the only demand of PAT and we would not be satisfied on more or less than this. He said that our FIR was registered on the intervention of the Army Chief and it is towards him that we look for justice. He said that the PM has enveloped those of his allies who are heaping criticism on army in the cloak of his government and democracy. He said that whenever the government of Nawaz Sharif is threatened, bomb blasts start to occur. He asked we want to know as to what is the relationship between the rulers of Punjab and federation and terrorism?

Dr Qadri profusely appreciated the passion and commitment of the workers and thanked the PTI, PPP, PML-Q, JI, MWM, SIC, and Pakistan minorities alliance on their participation and show of solidarity. He said that the demonstrations will continue in various cities till August 28, adding that he would announce the next round of protest campaign on August 28. He also appreciated the women for showing up in the protests in large number.

Dr Tahir-ul-Qadri said that we have not taken to the roads but been forced to do so. He said that we were not given the right to register our FIR. We were denied the right of formation of fair and neutral JIT. We were neither given the right to fair trial as promised by law nor were we given access to the copy of the Model Town judicial commission report. He said that the doors of justice were shut down on us because those who are responsible for the Model Town tragedy are in government.

Dr Qadri said that the Sharif family has decided to bring about a change in the Code of Criminal Procedure to save themselves from the private complaint filed by PAT. He said that the PAT workers have set up a new example by simultaneously holding revolutionary protest rallies and sit-ins in 105 cities of the country. He said that these demonstrations were also attended by farmers, clerks, workers and those parents whose children were kidnapped. He said that his workers cannot be browbeaten into submission nor can they be scared, stating that no other party has such courageous workers. He said that if Nawaz Sharif and Shahbaz Sharif reject all the facts he has stated, then he would come up with all the disclosures.

Dr Tahir-ul-Qadri asked as to why the Prime Minister continues to remain mum even when the RAW spy is caught and spills the beans; or the Indian PM confesses to open intervention in Balochistan; or the Indian spies are arrested from their factories; or there are bomb blasts in Quetta or human rights violations are committed in the Indian held Kashmir. He said that he wanted to tell the nation that if the elections of 2018 were held, then the country would be transformed into the Sharif dynasty and the Pakistan Army would become Punjab Police. He said that the nation will have to decide as to who they have to have between Pakistan and Sharif family.

Talking about the Panama leaks, the PAT Chairman said that if the steel mill was sold in 1980, where was the money parked for 19 years? He asked those who sold the steel mill of Jeddah to buy luxury flats in London that they should not tell lies with the nation. He said that these flats were bought 12 years ago. He asked the PM to reply as to why he concealed his assets in the General Elections 2013, those assets which he himself mentioned in his speeches on a number of occasions. He asked the political parties and their workers to be ready for decisive struggle, adding that the sun of the Sharif’s power is going to set very soon and forever.

Dr Tahir-ul-Qadri said that Punjab is the hub of terrorism. He said that the province has surpassed other federating units in the women rights violations for last eight years. At the same time, Punjab tops the list in the kidnapping activities. The province has earned notoriety for the maximum number of incidents of kidnapping of children, stating that the same goes for the robberies etc. He said that Faisalabad is the first destination for the kidnappers. He said that Punjab has become the biggest market of spurious drugs. He said that it is the stubbornness of the Punjab Chief Minister that he started the Orange Line Train project without the approval of the concerned departments. UNESCO expressed its extreme adverse response to this and the Lahore High Court also stopped the government to carry on with the project in areas that are threatening towards the historical sites.

Dr Qadri said that whatever they speak, the Sharif brothers consider it a law. He said that from Rs. 30 billion project of Sasti Roti to the train project, the stories of corruption are galore and the Sharifs are mired in it. He asked as to why no one ever asked how come Punjab, which had a surplus budget in 2008, has become indebted to the tune of Rs. 1000 billion. He said that the country’s foreign debt is Rs. 25,000 billion and when it hits Rs. 30,000 billion ceiling, Pakistan’s debt will be equal to its GDP.

Talking about the National Action Plan, Dr Tahir-ul-Qadri asked the Prime Minister to tell as to how many meetings did he preside over? Why were the funds to NACTA not provided? Why were courts hearing terrorism cases not given funds and personnel? He said that the Prime Minister’s allies in Balochistan are a hindrance in the way of verification of the national ID cards there. They do not want the ID cards handed over to terrorists to be verified. He also showed the copy of a letter written to DG Nadra on the occasion. 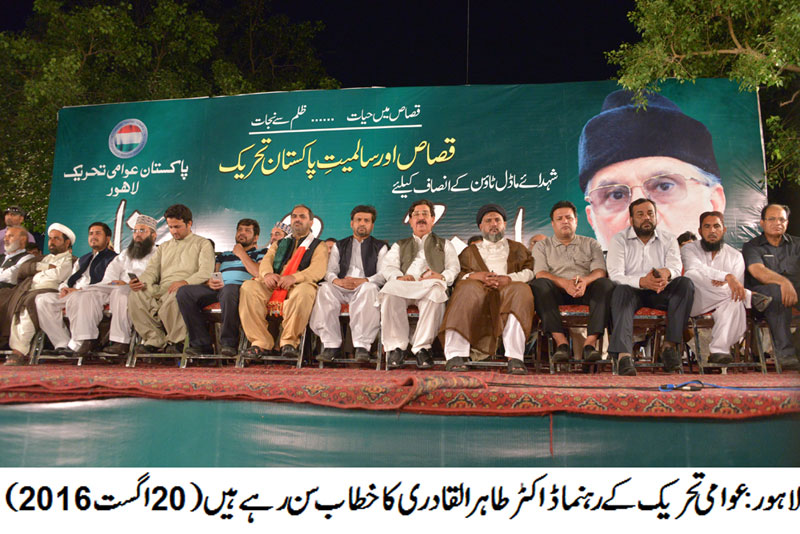 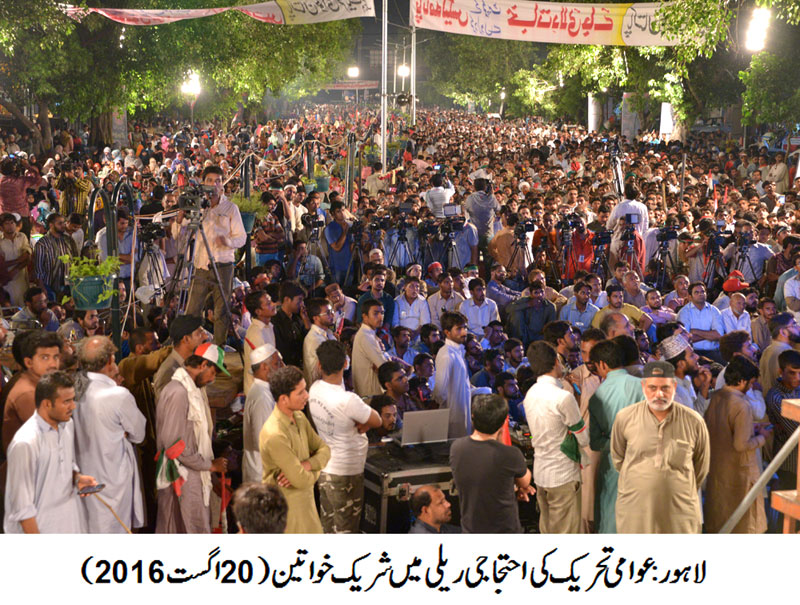 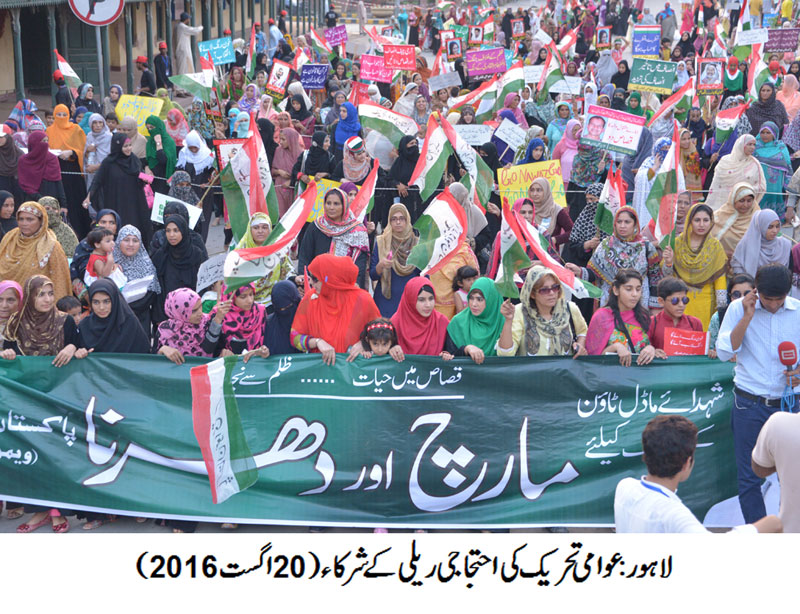