Being truthful & trustworthy a must for a ruler as per Quran: Dr Tahir-ul-Qadri 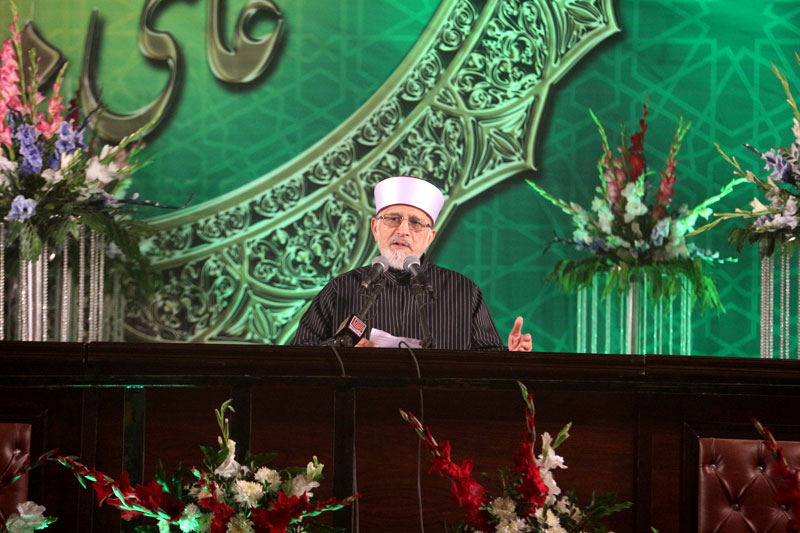 PAT Chairman and founding-leader of MQI Shaykh-ul-Islam Dr Muhammad Tahir-ul-Qadri has said that the Holy Prophet (peace and blessings be upon him), whose followers we are, was known for being ‘Sadiq and Ameen’ (truthful & trustworthy) in the Arab and non-Arab worlds before Allah Almighty conferred the status of prophethood on him. He said that for any ruler, being truthful and trustworthy is the foremost demand of the Quran and Sunnah and the Constitution of Pakistan, adding that unfortunately it is being rejected in Pakistan.

Dr Tahir-ul-Qadri said that the incompetent rulers have rendered corruption, injustice and terrorism into a culture, as a result of which Pakistan, which is fortress of Islam, has turned into a hub of corruption. He said that things have come to such a pass that instead of being ashamed, people defend corruption and injustice. He said that corrupt political elite is tearing into shreds human values, morality and democratic norms with abandon. He said that the oppressor is considered to be respectable whereas the oppressed continue to look out for shelter to avoid being victim to more excesses.

Dr Muhammad Tahir-ul-Qadri expressed these views while addressing a huge gathering of the faithful held to mark the birth anniversary of the Holy Prophet (peace and blessings be upon him) at The Mall Lahore on the Sunday night.

Dr Qadri said that justice is non-existent and humanity continues to suffer brutalities in the presence of the oppressive and exploitative system. He said that the followers of Islam, who gave the world the Constitution of human rights, prosperity, peace and safety, are victims of terrorism, lawlessness, violence and killings today. He said that a country, which was achieved in the name of Islam, has turned into a prison for the poor, the helpless and underprivileged sections of society due to corruption, abuse of power, and nepotism of the political elite.

Shaykh-ul-Islam said that the Holy Prophet (peace and blessings be upon him) would always stand by the poor, the weak and the oppressed instead of the powerful and the rich, adding that today opposite of this is happening. He said that the whole nation will have to play its active role with the power of the conviction for supremacy of law, Constitution and justice. He said that putting an end to the march of oppression is not just necessary for survival of the humanity but doing so is also is part of our faith as the Muslim. He said that oppression continues to grow as long as it does not face any resistance.

Throwing light on the services of Minhaj-ul-Quran International, Dr Muhammad Tahir-ul-Qadri said that the MQI is an international movement, which is working day in and day out for promotion of peace, harmony, culture of knowledge and research, brotherhood, and love in the world. He said that stains of terrorism on the body politic of Islam have been erased as a result of its scholarly and intellectual role. He said that thanks to the blessings of Allah Almighty and the Holy Prophet (peace and blessings be upon him), MQI issued an authentic 600-page Fatwa against terrorism and suicide bombing which won global applause.

A raging sea of people attended the 33rd edition of the International Mawlid-un-Nabi Conference at The Mall Lahore. The atmosphere was ecstatic and marked by loud roars of slogans raised to express deep sentiments of love and reverence for the Holy Prophet (peace and blessings be upon him). The central stage of the programme was made in front of the Punjab Assembly whereas the people were spread out from the Chairing Cross to Nasir Bagh. The stage was decorated very beautifully. Separate seating arrangements were made for women participants. 2000 youths of MSM and MYL performed the security duties in and around the venue.

The formal proceedings of the International Mawlid-un-Nabi Conference got underway with the recitation of the Holy Quran. The renowned Naat Khawans had the honour of presenting Naats in their melodious voices. Chairs were placed from the Chairing Cross to the Lahore High Court chowk. Effective sound system and huge sized screens were installed so that those sitting far away from the stage could watch the proceedings.

Dr Tahir-ul-Qadri said in his address that the kind of circumstances the Muslims around the globe are facing with bloodshed and violence being inflicted on them, no one other than their corrupt and incompetent ruling elites are responsible for their predicaments. He said that the Holy Prophet (peace and blessings be upon him) brought the Arab and non-Arab lands under the jurisdiction of the Islamic government through grand traditions of justice and superior human values. He said that we are living a life of slaves in our own homes because we have discarded the path of justice. He said, ‘if rulers will perpetrate Model Town-like tragedies by unjustly killing innocent people just to perpetuate their power and employ the state powers and resources to fulfill their personal desires and ambitions, how will Allah’s and His Prophet’s mercy (PBUH) visit such a place?

Dr Qadri said that we should make a vow on the blessed night of the Holy Prophet’s (peace and blessings be upon him) birth that we would study the blessed life of our exalted Prophet (peace and blessings be upon him) with sincerity of purpose and adapt and mould our lives according to the path shown to us by him. He said that we should resolve to dedicate ourselves to learning knowledge, adopting love, harmony, peace and tolerance as building blocks of our life and be desirous of Allah’s blessings to get rid of such evil tendencies as extremism, narrow-mindedness and Takfeeri ideology. He said that we should make a resolve to make truth and justice the guiding starts of our lives.

Leading a tearful Dua at the conclusion of the conference, Dr Muhammad Tahir-ul-Qadri prayed to Allah Almighty to rid the Muslim world of corruption, sectarianism and injustice. May the Muslims of Iraq, Syria, Afghanistan, Kashmir, Palestine and Burma who are living a miserable life be blessed with peace and prosperous life! He also prayed for the departed souls of the martyrs of the Model Town tragedy, saying that those who shed the blood of innocent people will be disgraced not only in this world but also in the hereafter.