23 couples married off at MWF ceremony

A mass marriage ceremony was held today at the central secretariat under the banner of Minhaj Welfare Foundation. President of MQI Dr Hussain Mohi-ud-Din Qadri presided over the event.

In today’s mass marriage ceremony, 23 couples entered into matrimonial alliance. Dower to the tune of 175,000 was given to each bride besides arrangement of feast for 700 guests. The brides and grooms were welcomed traditionally. The religious scholars of Minhaj-ul-Quran Ulama Council solemnized the Nikkah whereas the religious leaders of Christianity fulfilled the marriage rites of the Christian couples.

Delivering his keynote address, Dr Hussain Mohi-ud-Din Qadri said that public service is a worship. He said that the Saints are alive in the hearts of the people because of their selfless service to humanity. He said that convents of the Sufis were the community centres in essence where all would come without any discrimination to have their needs met. He said that Minhaj Welfare Foundation has funded the marriages of more 1200 couples belonging to the poor households to date under the supervision of Dr Tahir-ul-Qadri. He said that the PAT Chairman’s struggle for revolution and politics is an important means of service.

Speaking on the occasion, AML President Sheikh Rasheed said that whether it is of ‘law’ or ‘N’, funeral of the either should happen now, warning that otherwise there is a fear of bloodshed in the country erupting either today or tomorrow. He said that consensus has been forged between the thieves, robbers and looters. He said that US President Obama’s daughter joined a restaurant for a job whereas our ‘daughter’ is an owner of flats of worth Rs. 8 corers. He said if the looters remained imposed on the nation, then the children of the poor will continue to face humiliation. He said that Dr Tahir-ul-Qadri is serving the suffering humanity by arranging mass marriage ceremonies of the poor daughters.

MWM leader Allama Raja Nasir Abbas said that marriage brings about fundamental change in one’s life. He said that it is a journey from being a single to being a couple. He said that getting worried for the poor is a worthy act in the eyes of Allah Almighty. He said that he is pleased to find out that the MQI has made service to the people the means of worship. He said that venue where dozens of couples and their families have got together today is the same place where perpetrators of Model Town tragedy killed innocent people. He congratulated the Minhaj Welfare Foundation on holding the mass marriage ceremony in a splendid manner.

Ghulam Mohi-ud-Din Dewan, member of Azad Kashmir Assembly, said that Dr Tahir-ul-Qadri is rendering a great service to the people without any discrimination. He said that whenever he visits MQI, he gets a sense of satisfaction and peace. He said that Dr Tahir-ul-Qadri is only political leader who is not only educating people through his educational institutions but also arranging mass marriage ceremonies to marry off the daughters of the poor families. He said that a great deal of oppression and excesses are being committed in Pakistan and there is no one to do so except the powerful people from the ruling elite. He said that the jails are filled to its capacity with the poor but the high and the mighty are at large despite committing horrendous crimes. 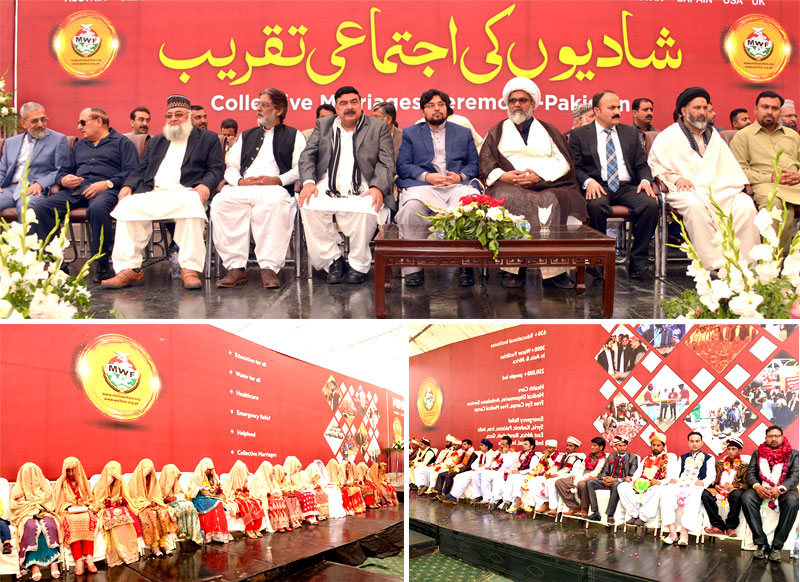