The first ever European al-Hidayah Camp, organized by Minhaj-ul-Qur’an International Norway in the first weekend of August, placed extremism and radicalization on the agenda. More than 450 European Muslim Youth across the Europe emerged with the message of peace, reconciliation and dialogue.

After the project was given by Shaykh-ul-Islam in 2015, the task was delegated to Minhaj Youth League Norway by the NEC. Minhaj Youth League arranged the magnificent camp in Sarpsborg (Norway) to provide the European-Muslim youth with necessary tools to enhance their work against extremism and to equip them with a counter-narrative. This tool box was brought back home by the attendees who will now benefit thousands with their knowledge on counter-terrorism. It consists mainly of the Islamic Curriculum against Terrorism anchored in authentic Islamic teachings. The curriculum destroys the ideology that is actively promoted and invoked to by extremist and justified with Islamic teachings.

After the registration on Friday morning, the camp was officially opened with a formal opening session. Profiled personalities from federal and local authorities, researchers, and several national media houses were present at this occasion. Apart from His Eminence Shaykh-ul-Islam’s keynote lecture, other dignitaries who shared their reflections included the Minister of Immigrations and Integration, County Mayor, the ambassador of Pakistan and a female priest.

In his address His Eminence Shaykh-ul-Islam emphasized on the Prophetic message of integration and the need of providing a counter narrative to the narratives presented by extremists. On integration, Shaykh-ul-Islam said that the Prophet Muhammad (peace be upon him) has taught us to integrate. He provided the first constitution titled as-Sahifah (consisting of 63 articles) in which he declared people of all faith to become one community. Islam gave us a concept of belonging, not enmity. The Prophet (peace be upon him) provided freedom and security for all religions to practice and have their customs. He declared the land to be a land of peace, free from terrorism.

Emphasizing on providing a counter narrative, Shaykh-ul-Islam said that this is a common cause. All of us must work to unite people and fight against terrorism. It’s also very important to find out the right solutions, to protect our younger people from becoming radicalized. If we don’t fight it, common Muslims living in peace are being suspected for wrong actions of a few criminals. Many causes will be related to social justice, economic justice, political freedom, abused human rights, judicial rights, external affairs, etc. Muslims have a special responsibility, because some people are using verses of the Quran in a wrong context. Our religious duty is to provide a counter narrative.

The opening session was conducted by Muniba Ahmad from Minhaj Sisters League Norway. She added that: "One of the biggest responsibilities upon the society as a whole, and especially upon our politicians, is to make youngsters feel at home where they live. Make them feel like a part of the society. This is one of the main aims of this camp. We want the participants to take home a message that you don´t have to make a compromise between your Muslim identity and your Norwegian, or German, or your French identity. You can be both."

Norwegian translations of “The Supreme Jihad” and “Peace, Integration and Human Rights” were also launched at the ceremony and provided as gifts to the Integration Minister, County Mayor, The Priest and The Ambassador to Pakistan by Awais Ejaz, President MYL Norway.

The session was closed with concluding remarks by Vice President of MYL, Hafiz Muhammad Yasin Adil. 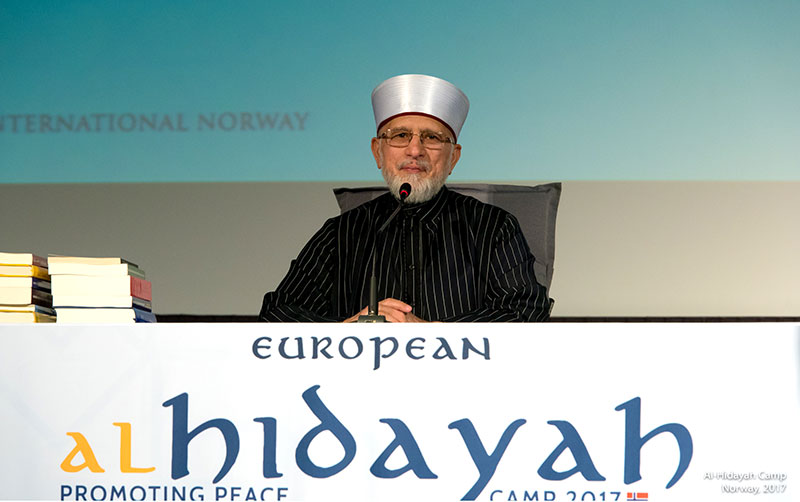 The Science of the Heart

After a short break, Shaykh-ul-Islam was due to deliver his first lecture of the camp. Before his lecture, President of MYL Norway & Europe and Head of the European al-Hidayah Committee, Awais Ejaz Ahmed, gave the opening speech. He welcomed all the participants from 11 European countries and congratulated them on their contribution in making the camp happen. He further used the opportunity to thank every single person in the al-Hidayah organizing Committee for the work and dedication they have put down running up to the camp.

MEC President, Zille Hassan, also gave a speech where he thanked Shaykh-ul-Islam for having provided Europe with this opportunity. He also congratulated MQI Norway and especially MYL on organizing such a historical camp.

Director of MQI Norway, Allama Muhammad Iqbal Fani was the stage secretary on this occasion.

Shaykh-ul-Islam personally congratulated the entire MYL executive and the al-Hidayah Committee for their splendid and marvelous performance, execution and organizing. Shield was also awarded to MYL Norway by Shaykh-ul-Islam himself.

The topic for the lecture series was on the spiritual states of the Heart, how to diagnose its illnesses, the steps leading to its death and the prescription to use for prevention and treatment. The lecture series was mainly based on Shaykh-ul-Islam’s unpublished Arabic work on Tasawwuf – “al-Haqā’iq wa al-Raqā’iq”.

During the three days, the participants learned that despite being physically alive, human beings are dead. The death is the death of heart. They have no spiritual inclination and no longing. There is fine line that exists between the life and death of the heart, and that is termed as the illness of the Heart.

Good deeds lead to the revival of the Heart. Sadaqah, recitation of Qur’an and durood, dhikr, tawbah, repentance, service of mankind, ihsan, respecting elders, being softhearted to people and all the actions linked to manners and worship will lead to the revival of the Heart. Irrespective of the nature the act, whether its secular or religious, performing it while knowing that it will please Allah will revive your Heart. Similarly, wrong deeds like anger, injustice and backbiting, slowly but surely will bring death to the heart. Both the religious as well as secular deeds.

M`arifah is the awakening of the Heart. This heart awakening happens through the interconnection to Allah, and a person cannot connect his heart to Allah if others are inhabiting this heart. Only when the heart is emptied from all else than Allah, He will reside in it.

Furthermore, they learned that a deed doesn’t appear out of a vacuum. It has a long journey behind it, which cannot be seen. Hence, the visibility of a deed does not equal the appearance of the deed. This is part of the knowledge of the Heart and the 10 steps that results in the hearts becoming sick and die and what treatments are available to cure it.

The focus area after the lectures was workshops. The purpose of conducting these workshops was to create a common platform for Muslim Youth where they could exchange ideas on current issues. On Saturday, before and after the main lecture, seven workshops were run in parallel. All the workshops discussed topic that are relevant for the debate around Muslims, their values and Islamic teachings. A wide range of workshops were conducted from “Da’wah in modern times” to discussing the possibilities Muslims may create by becoming an active community of impact and purpose. For instance, in the workshop “Spot and stop an extremist” different models of tackling extremist ideology where discussed and how these can be incorporated with the Anti-Terror Curriculum. The workshops were a success and participants brought a lot of relevant experience for their work to prevent extremism. 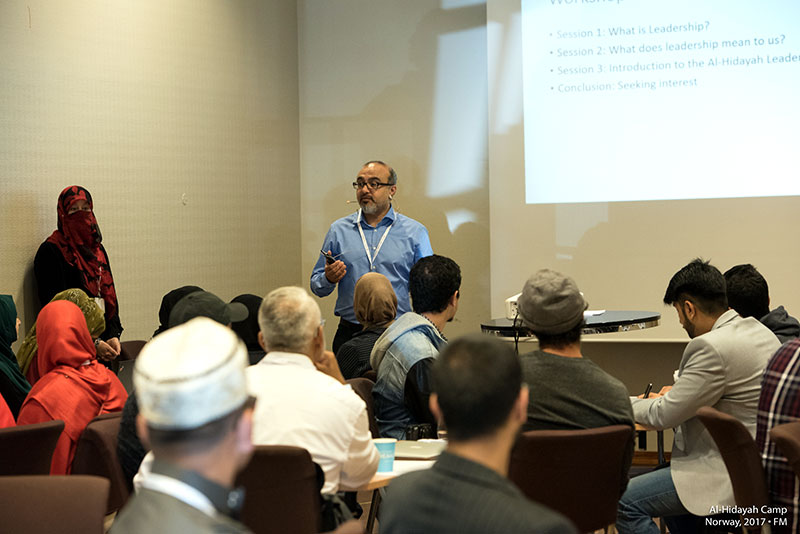 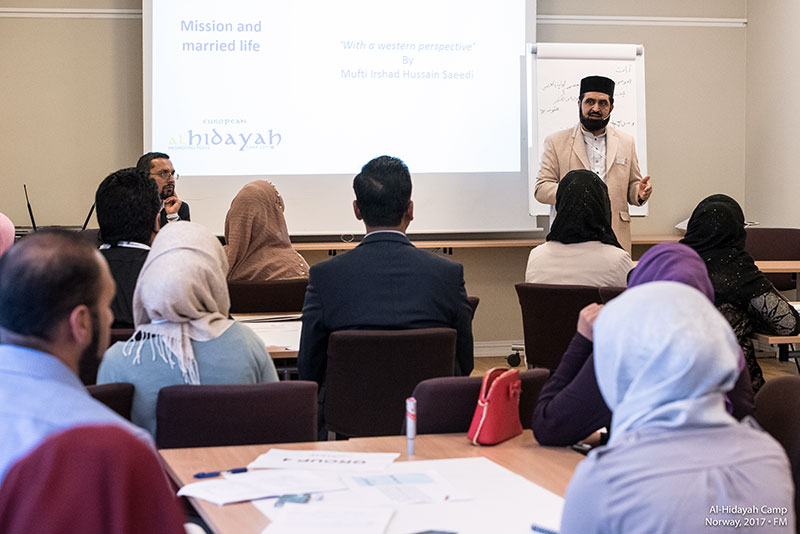 The main attraction at the camp was “the City of Knowledge” (al-Madinat-ul’Ilm). This was a street dedicated to Islamic knowledge and art. It also featured the “Anti-Terror Exhibition” a set of key segments of the Anti-Terror Curriculum that were visualized graphically. The exhibition presents a set of theological tools which can prevent radicalisation and outperform the extremist ideology and terroristic mentality. The idea is to fight extremism through artistic impulses. The exhibition was visited by Shaykh-ul-Islam and his household and the exhibition committee was applauded for its creativity. Other features were biography of Shaykh-ul-Islam and Dr. Hassan Mohi-ud-Din Qadri, timeline of Shaykh-ul-Islam, Islamic Art, Shaykh-ul-Islam’s chains of transmission and teachers, various stalls etc. 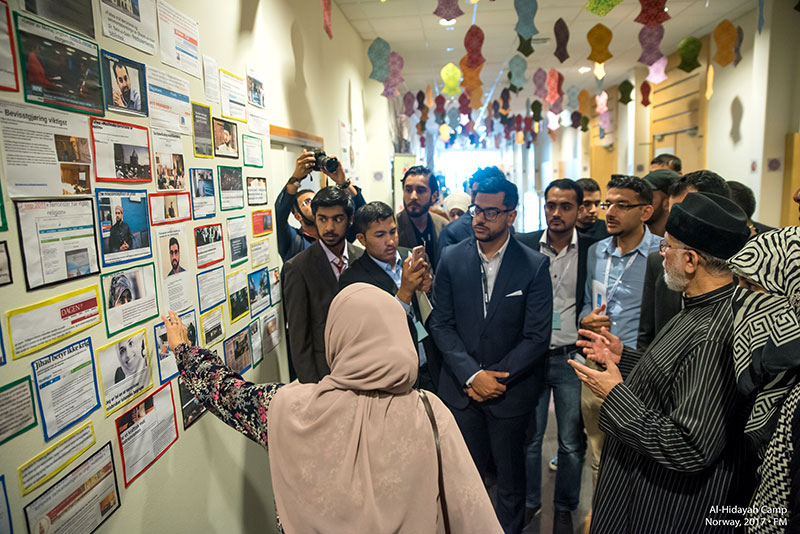 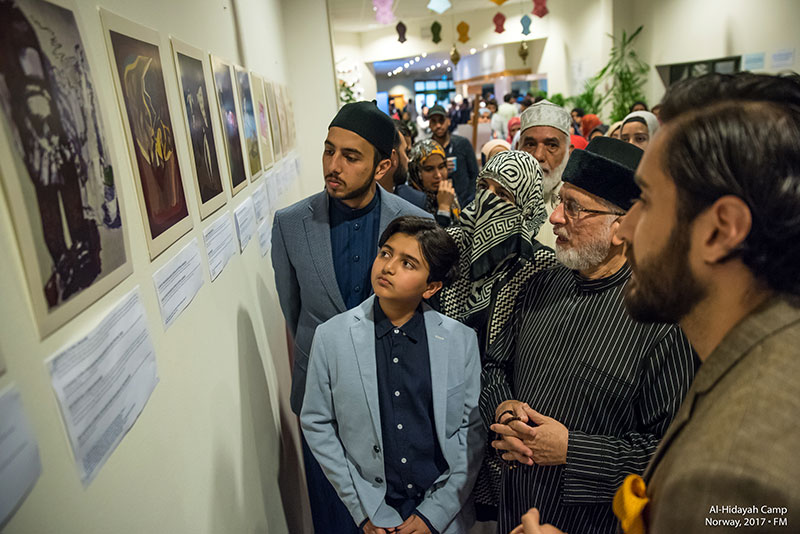 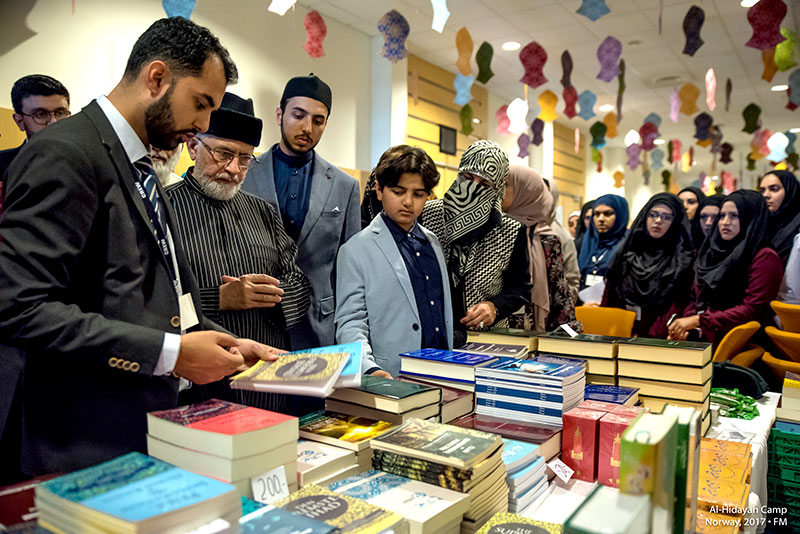 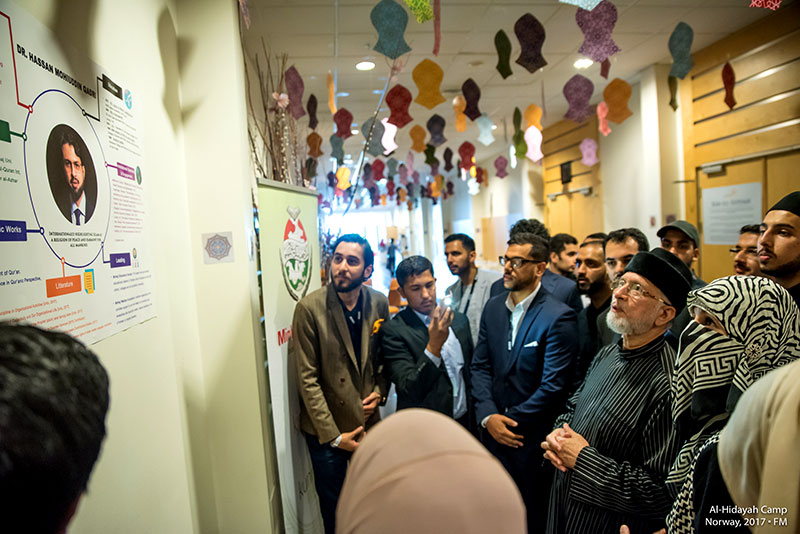 Alongside the intellectual lectures, the European al-Hidayah Camp also focused on the development of the spiritual Self. Spiritual mahafil were arranged after Maghrib on both Friday and Saturday. The first mehfil was lead under Shaykh Hammad Mustafa al-Qadri’s supervision. The second Mehfil-e-Naat featured Shaykh-ul-Islam, Shaykh Hammad Mustafa and Shaykh Ahmad Mustafa al-Arabi. It was concluded with Hadrah form of dhikr. 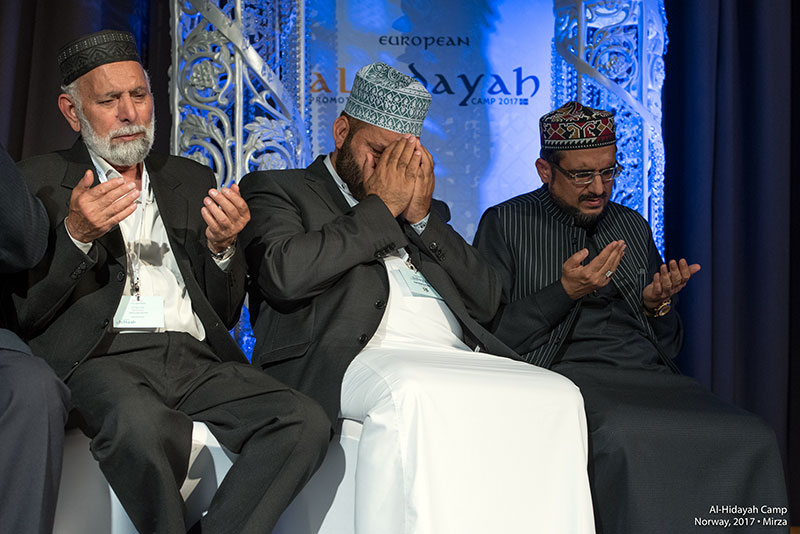 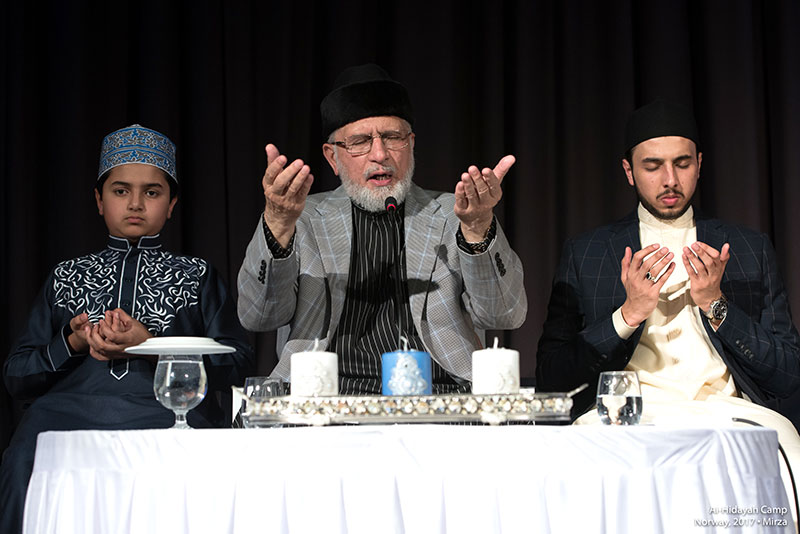 The last day was set off to a short, but an impactful lecture by His Eminence Shaykh-ul-Islam, delegating shields and certificates and the ijazah of Hadith al-Musalsal bi al-Musafaha. Camp was ended around 3 ‘o clock Sunday afternoon. President of Minhaj-ul-Quran International Norway, Ejaz Ahmed Warraich, ended the program with a closing speech. He thanked Shaykh-ul-Islam for his presence, all the participants for their participation and all the forums of MQI Norway, especially MYL, for their dedication and hard work in making the camp successful. 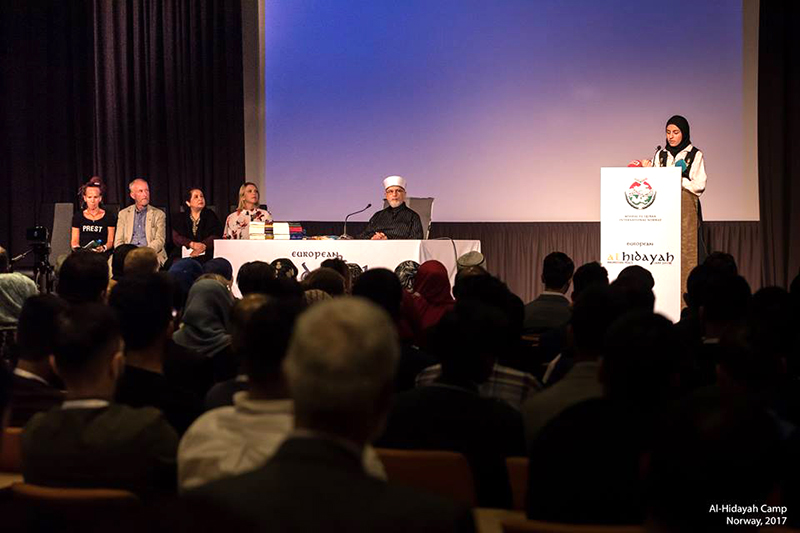 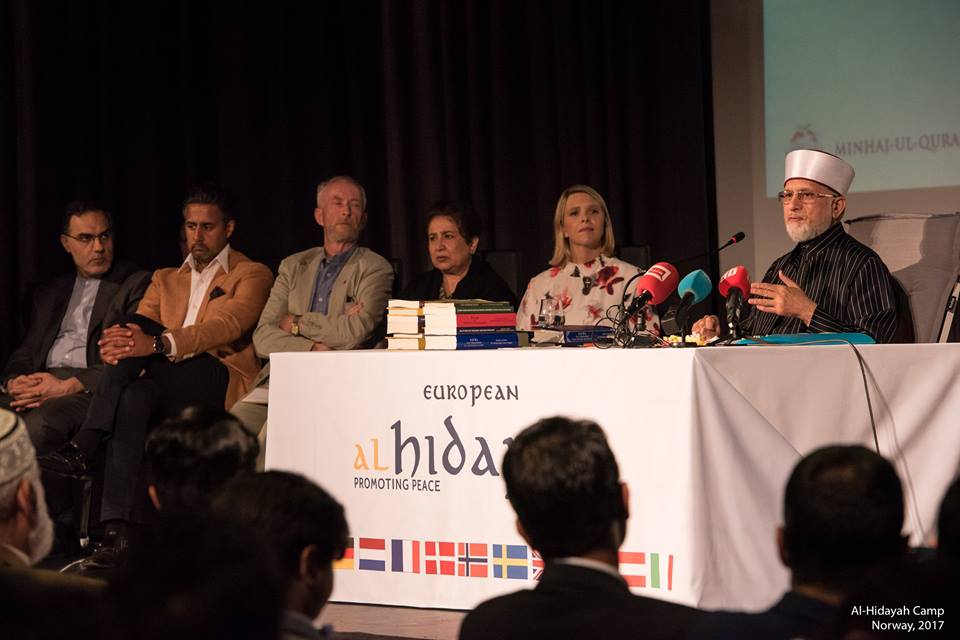 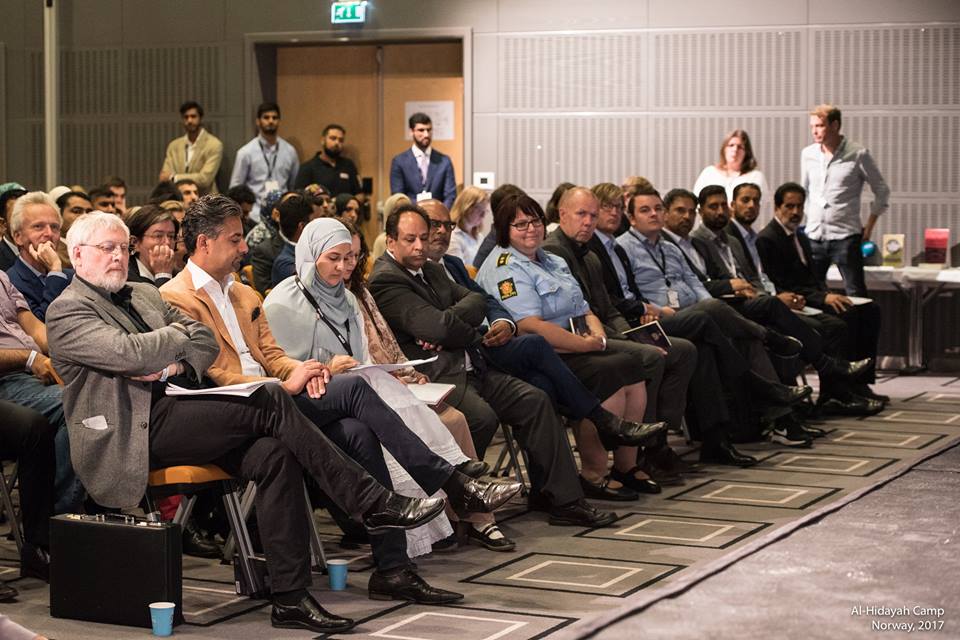 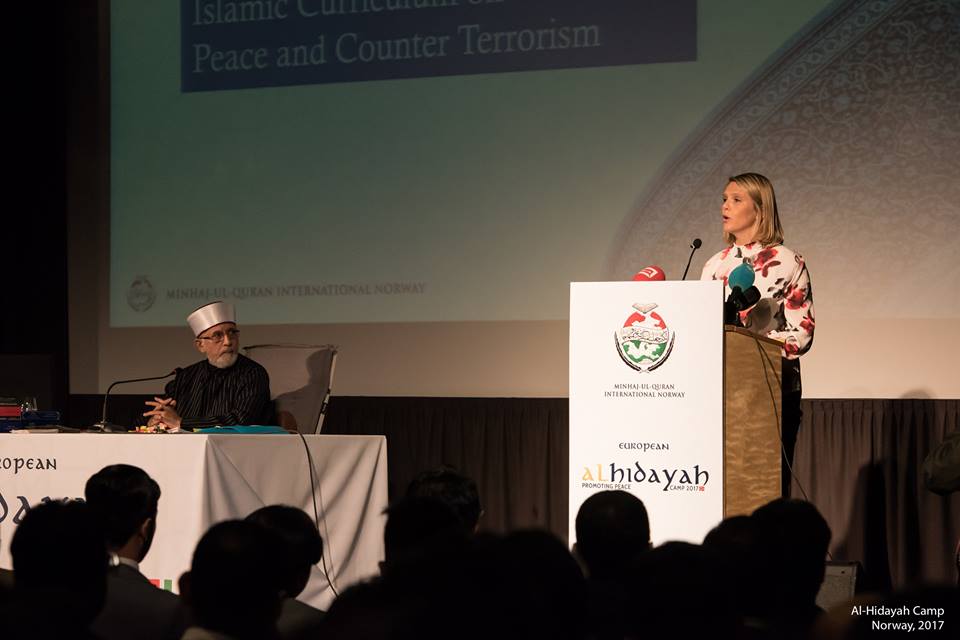 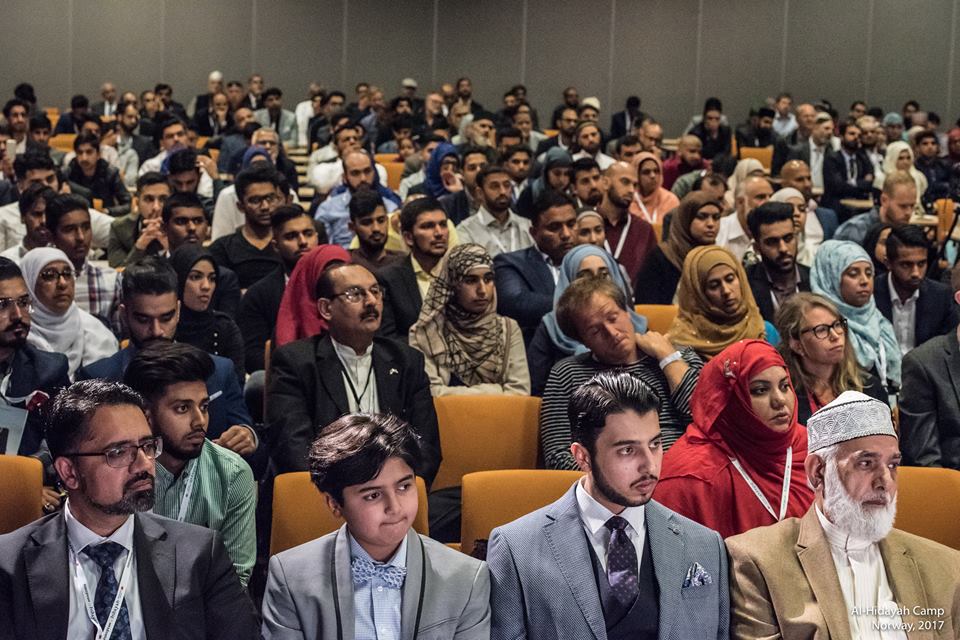 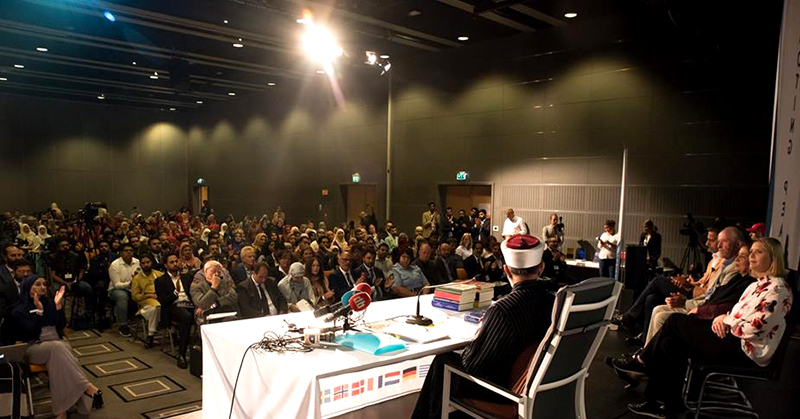