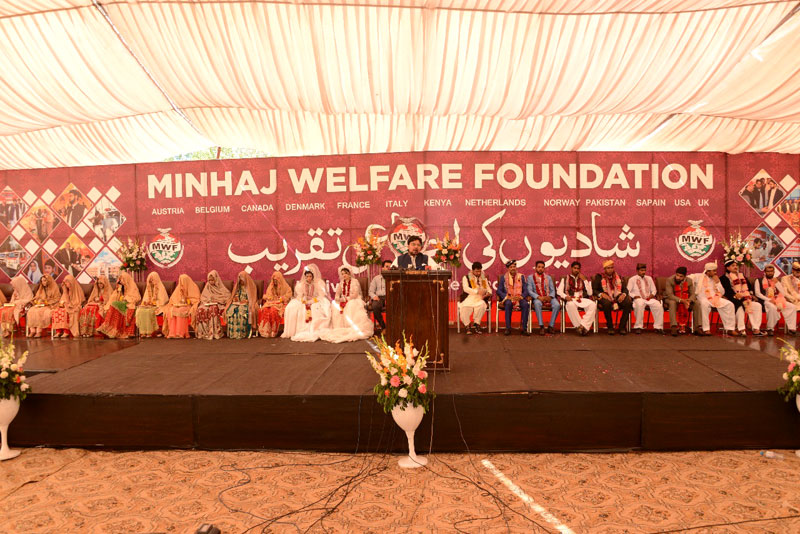 Minhaj Welfare Foundation arranged 15th Collective Marriages ceremony on March 25 in its central secretariat in Model Town in which 23 couples including two Christian couples tied the knot. The Nikah of the Muslim couples was solemnized by the religious scholars belonging to Minhaj Ulama Council whereas the marriage rites of the Christian couples were performed according to their religious customs. The brides was gifted a household stuff of Rs. 175,000 per head whereas 1500 guests were entertained with marriage feast. The brides were made ready in beauty saloon set up for this purpose inside the MQI secretariat where the women belonging to Minhaj Women League were present to render their help. 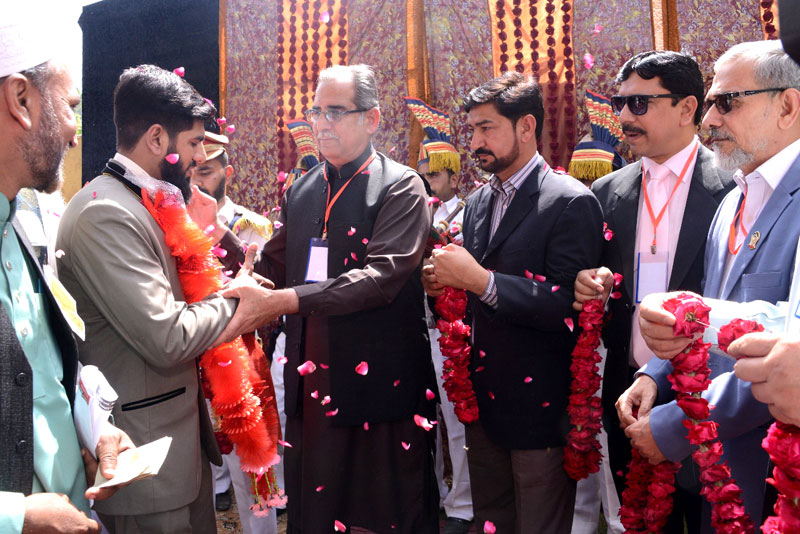 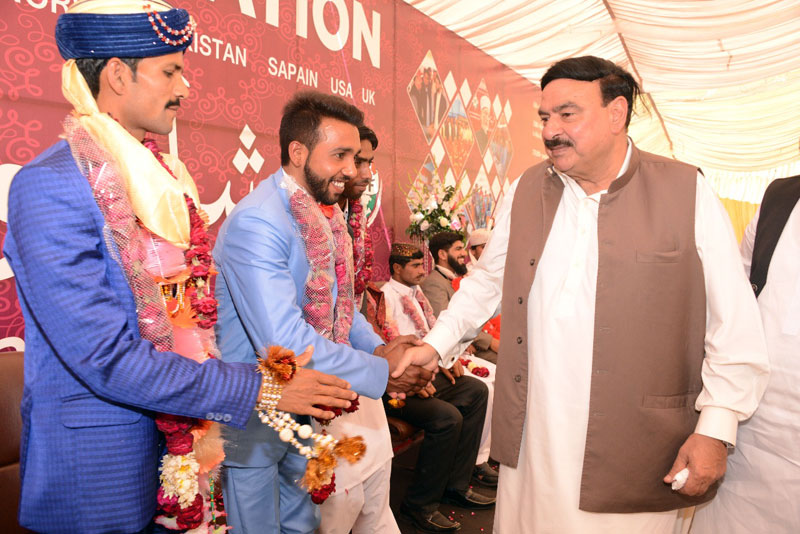 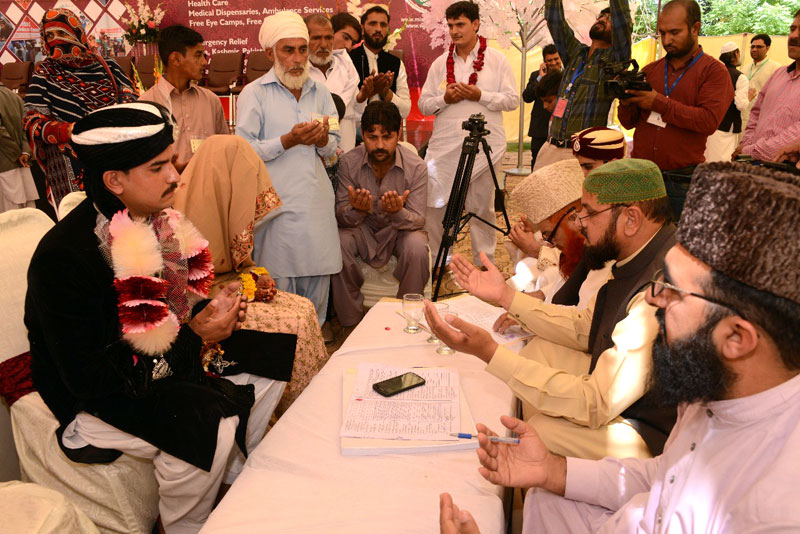 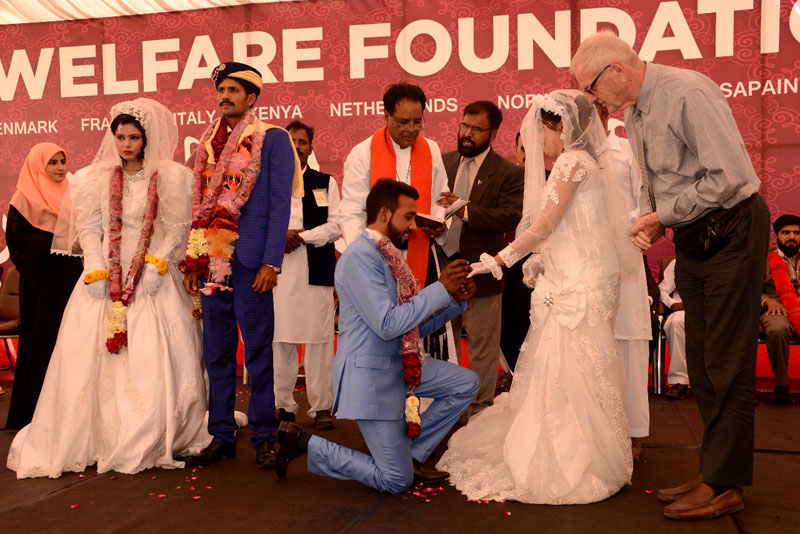 The marriage processions started arriving at the central secretariat at 9 am till 1 pm. The MQI leaders would shower rose petals on the guests and the grooms whereas the brides were warmly welcomed by the leaders of Minhaj Women League. Both brides and grooms were presented gifts on behalf of Dr Muhammad Tahir-ul-Qadri. 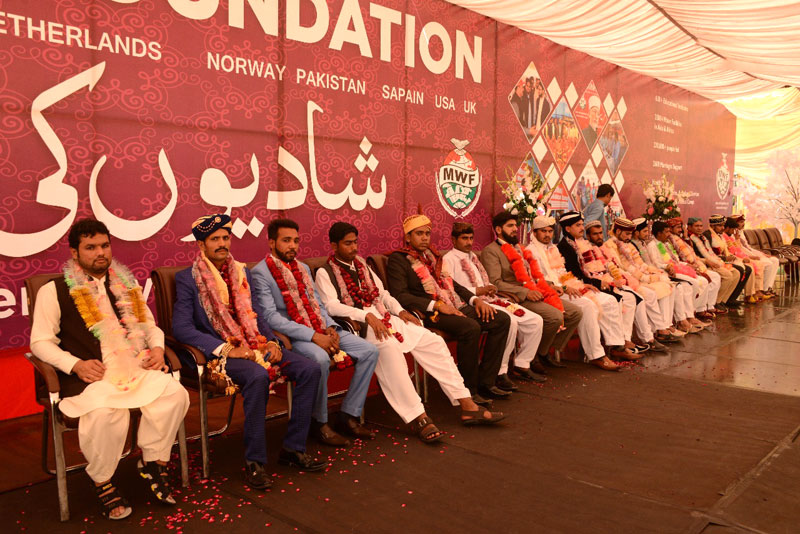 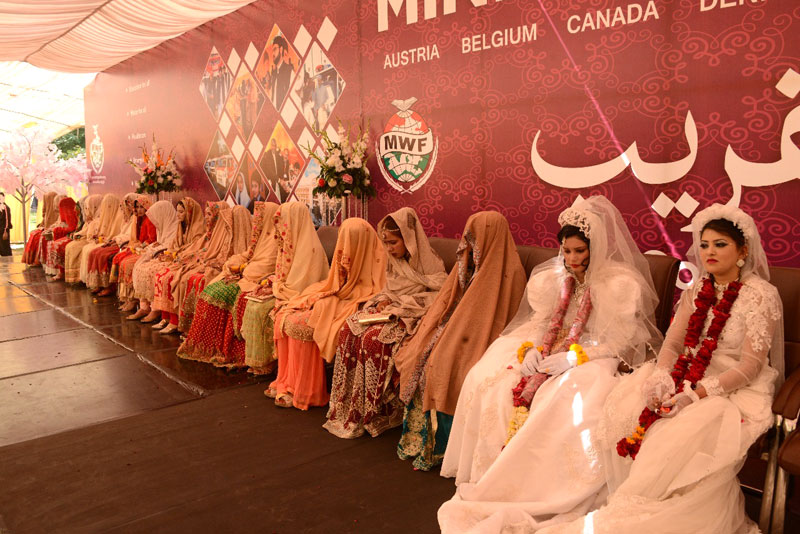 The Muslim brides were seen off under the shadow of the Holy Quran. Tears came to the eyes of their parents at the time of send-off. Secretary General MQI Khurram Nawaz Gandapur and Brig (r) Muhammad Iqbal thanked the respected guests. MWF Director Syed Amjad Ali Shah conducted the proceedings of the programme and welcomed the couples, their parents and relatives.

PAT Chairman Dr Muhammad Tahir-ul-Qadri attended the proceedings of the mass marriage ceremony through a video link. Speaking on the occasion, he said that welfare of the humanity is the core message of Islam and an essential part of its teachings. He said that the foremost responsibility of any Islamic state is to work for the betterment and well-being of the people living there without any discrimination of caste, creed and colour. He said that Allah Almighty be thanked many a time Who enabled MQI to serve the humanity in addition to the religion in this day and age. He congratulated the newly-weds on the start of blissful phase of their life.

Addressing the ceremony, Sheikh Rashid Ahmad said that Dr Tahir-ul-Qadri and the MQI have done an excellent service to humanity and Islam. He said that the biggest of deeds in this day and age is to help those in acute need of help. He congratulated Dr Qadri, MQI and the newly wed couples on this occasion.

Dr Hussain Mohi-ud-Din Qadri, president of the MQI, also addressed the ceremony and said that Islam teaches us to give back to others what is in access of our needs and wants. He said that human welfare is at the core of the teachings of Islam. He said that Islam stands for a harmonious and equal society where the state takes care of the needs of the less privileged.

Abdullah Hameed Gul, while speaking on the occasion, said that Dr Tahri-ul-Qadri projected a peaceful face of Islam to the world. He has promoted dialogue and understanding between Islam and other religions.

PTI MPA Jamshed Cheema said that if the PTI came into power, it will set up a welfare system for the underprivileged. Mussarat Cheema, wife of Jamshed Cheema, also spoke at the ceremony and congratulated the newly-weds on the start of a new phase of their life. 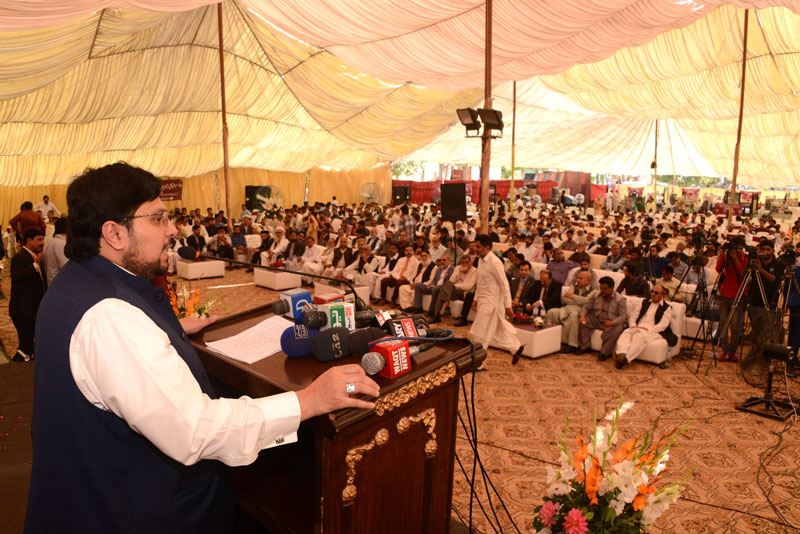 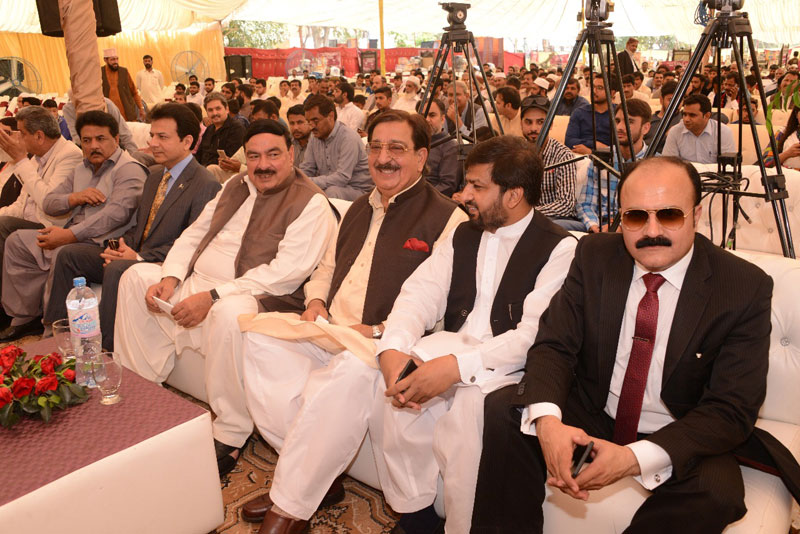 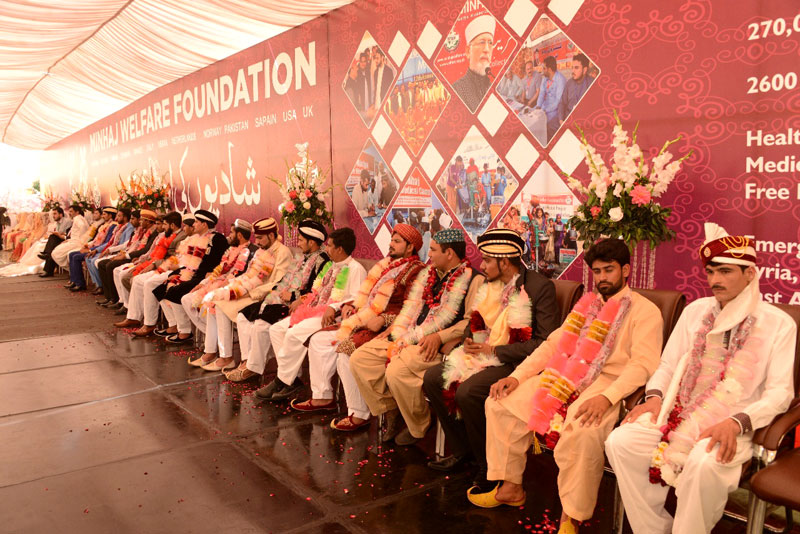 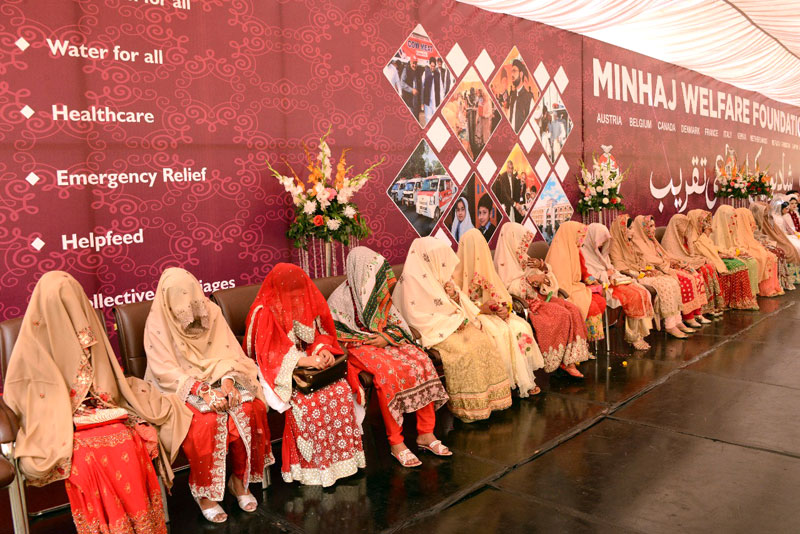 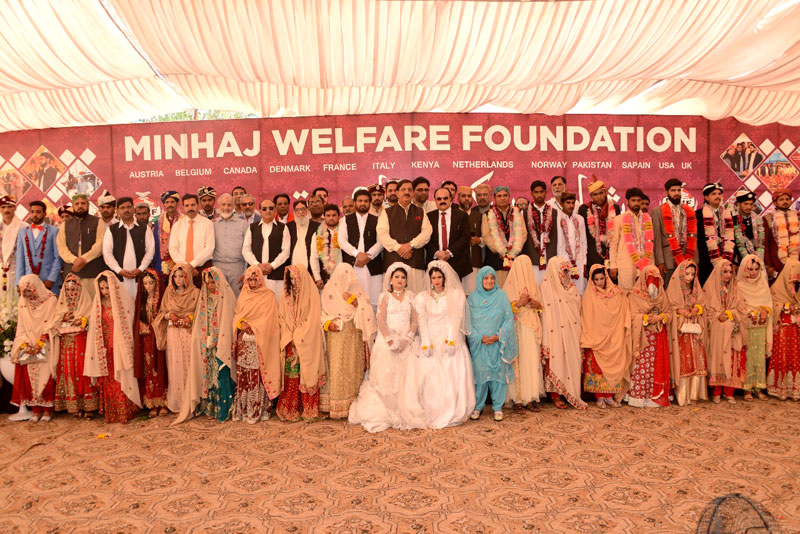 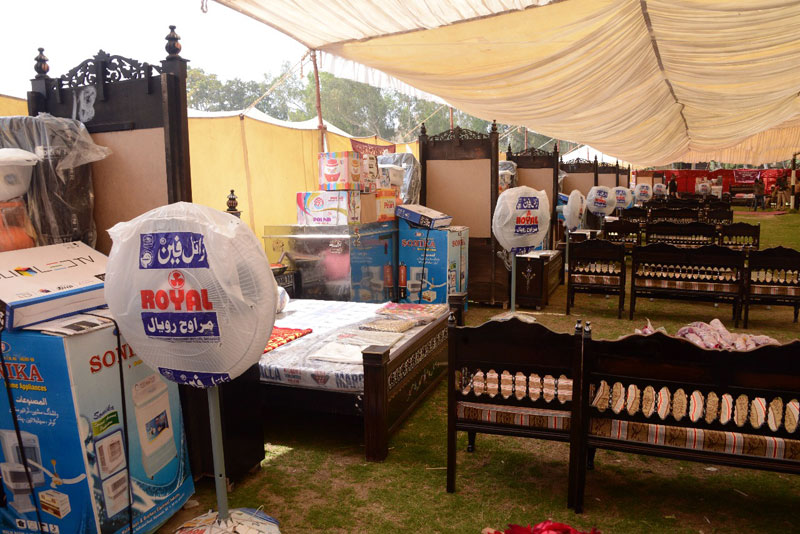 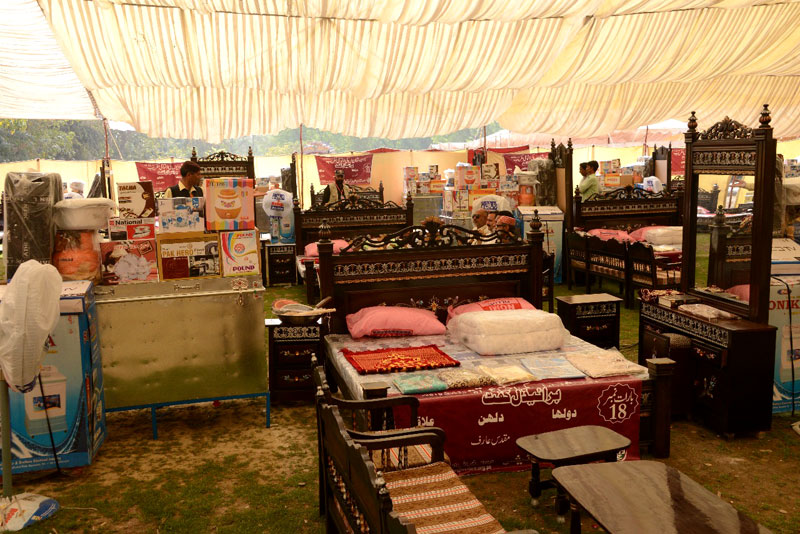