I am deeply saddened to hear about the passing away of Hazrat Sayed Shah Abdul Haq Gillani of Golara Shareef. He was a great spiritual and an esteemed religious figure. I extend my heartfelt condolences to his son, family members and all the devotees upon his sad demise. 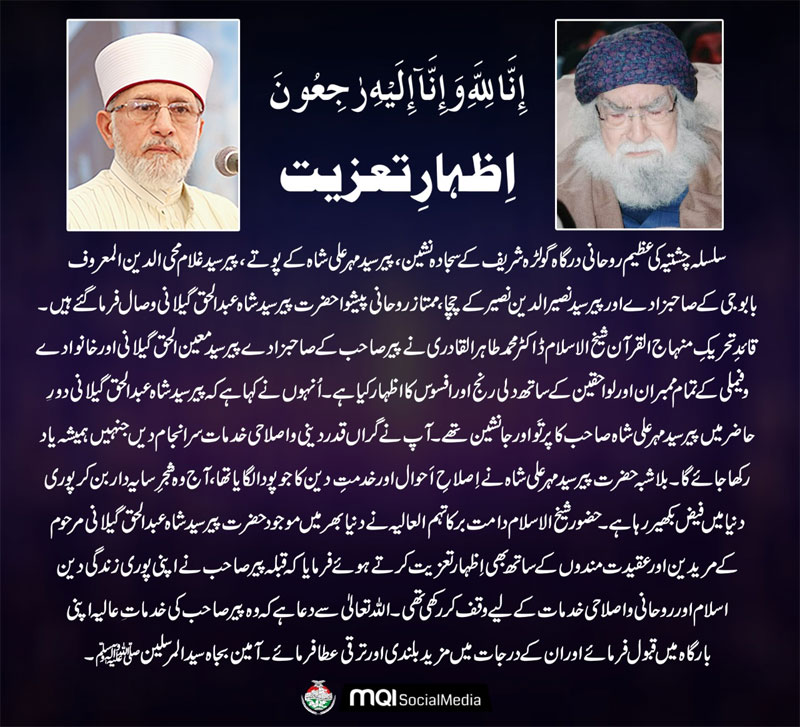 Shaykh-ul-Islam Dr Muhammad Tahir-ul-Qadri has expressed his deep sense of grief and sorrow on the sad demise of Pir Sayyid Abdul Haq Gilani and conveyed his profound condolences to Pir sahib's family and the followers. In his condolence message, he said Pir Sayyid Shah Abdul Haq Gilani was a true successor of Pir Sayyid Maher Ali Shah. He performed valuable religious and reformative services that will be remembered for a long time. He said the sampling of reformation and service of the religion planted by Pir Sayyid Maher Ali Shah is benefiting the whole world as a shadowy tree.

Dr Tahir-ul-Qadri said that Pir Sahib dedicated his whole life to the service of Islam and moral and spiritual training and education of the faithful. He prayed to Allah Almighty to rest his soul in peace.