The Messiah, In light of World Scriptures (An interfaith Event) 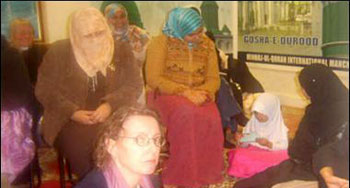 By the grace of Almighty God, Al Farghana Minhaj ul Quran Int. (Manchester) held an interfaith event on Sunday 14th December. This event included various members from different religions in a unique multi faith event in the company of Shaykh Ramadan al-Qadri, titled “The Messiah, in the light of world scriptures.”

The event was hosted by Br. Ramzan (Student Al Farghana Institute Manchester). He spoke about intentions of love and mutual understanding and building bridges between the Major religions.

The event started by recitation of Verses from Surah Al-Imran by Qari Mubashir Anwar. The guests’ speakers enjoyed the recitation.

The first speaker of the evening, Dr Rueven Silvermen, (Representitive of Judaism) spoke about the concept of the Messiah in the Jewish faith and its development through history.

He spoke of the Hebrew word for Messiah, it’s meaning ‘anointed one’ and how this concept was intimately tied to King David and his dynasty. This idea of blessing and spiritual leadership conveyed by the term ‘Messiah’ was later transferred from the dynasty of King David to a future king of Israel who would rule with the justice and grace of ‘the anointed one’.

The concept of ‘Messiah’ is not just a vague historical or futuristic figure for Jewish people but is vibrant and living in the Jewish faith today. The ‘Messiah’ is mentioned in Jewish prayers and greetings in person and is present as an understanding of a messianic age of liberation and peace.

An executive member of Al Farghana Institute, Dr Muhammad Zulfiqar, then spoke briefly on the aims and purpose of the institute, its current activities and how it plans to serve the community and beyond.

A convert to Islam, brother Younis, spoke about his personal experience of Islam and how it has changed his life for the better. He spoke about the calm he continued to experience from his adopted faith and conveyed this with something of the serenity with which he spoke.

Dr John Perry then spoke of the Messiah from the Christian perspective. He began by raising several epistemological preliminaries to start his talk from the basis of man’s limitations in apprehending and approaching the Divine. After this he spoke of the Messiah specifically through the person of Jesus Christ.

The Third and final Guest Speaker, Imam Manzoor Shakir then spoke of the Messiah from the Islamic perspective. He also focused on the person of Jesus Christ but additionally reminded those present that we live in a time dominated by the religion of no-religion. Therefore this time is better suited for inter-religious unity, the job carried by Minhaj-ul-Quran very well throughout the world. The Imam also highlighted that the work of Sayyidi Shaykh-ul-Islam in this field is unprecedented and we all need to seek guidance from it.

After the speeches there was a Q&A / Open discussion session which was chaired by Shaykh Ramadan Qadri (Principal Al Farghana Institute). All attendees were given the opportunity to ask questions or make a comment or contribution to the topic. Shaykh M Ramadan Qadri highlighted the works of Sayyidi Shaykh-ul-Islam which His Eminence produced for better understanding among the Religions. He mentioned how the Minhaj-ul-Quran Mosque was opened on Christmas day for Christian worship following the Sunnah of the Final Prophet (SAW). Shaykh Ramadan then concluded the programme with a supplication (Dua).

Among the participants were Reverend Bob Day and Reverend Jeniffer Mckenzie who actively took part in the discussion.

All attendees appreciated the Interfaith efforts of dialogue and interaction of Farghana Institute and Minhaj-ul-Quran and they were served food and refreshments by the event volunteers, this was also a good opportunity for all attendees to interact with one another.

The guests were given a gift of books of Sayyidi Shaykh-ul-Islam on behalf of the institute, before they departed.

May Almighty God Guide Humanity to the straight path. (Ameen)