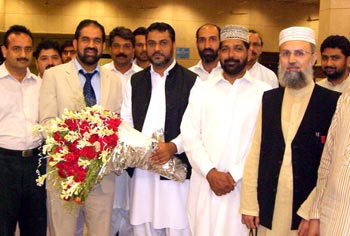 Secretary General of Minhaj-ul-Quran International; Dr Raheeq Ahmad Abbasi, reached Pakistan after a successful organizational tour of Europe and UK. A delegation of MQI’s leaders and workers led by Sheikh Zahid Fayyaz, acting Secretary General, welcomed Dr Abbasi at the Lahore Airport. Talking to the workers on the occasion, he said that the love of the Holy Prophet (S.A.W) is the greatest treasure of life. There is a need to strengthen our relationship with the person of the Holy Prophet (S.A.W). Peace, happiness and tranquility can return to our lives only then. He said that MQI had put in place a coordinated system for spiritual and moral purification of people throughout the world. He emphasized the need of love and peace instead of promoting hatred so that our planet become worth living.