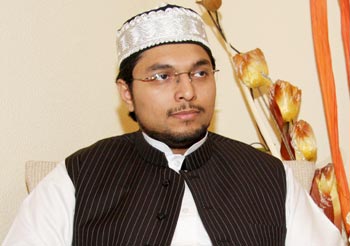 Shaykh-ul-Islam Dr Muhammad Tahir-ul-Qadri, the founding leader and patron-in-chief of MQI, has nominated Sahibzada Hussain Mohi-ud-Din Qadri as the President of Federal Council of Minhaj-ul-Quran International. Hussain Mohi-ud-Din Qadri is an emerging economist and educated young man. He got his education up to intermediate level from Pakistan. He, then, moved to Canada from where he did his graduation from York University Toronto with Economics and Political Science as his majors.

Later on, he got his MBA in International Business from a renowned university of Paris namely Sciences-Po. Upon his return to the country, he got associated with Lahore University of Management Sciences (lums) in the capacity of Research Fellow. He is, presently, pursuing his PhD on the subject of Global Political Economy from an Australian University Melbourne. In addition to the acquisition of modern knowledge, he has also been getting education of Shariah and Islamic sciences.

He has so far authored a number of books, articles and research papers on national, international, political, social and economic topics in both Urdu and English languages in the esteemed dailies of Pakistan including The Nation, The Money Plus, The News and Jang, etc. The central leaders of Minhaj-ul-Quran International have expressed their happiness over his nomination and extended to him their felicitations.