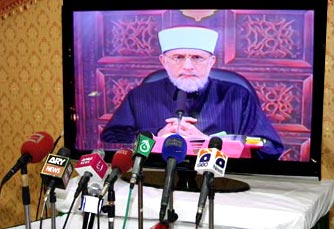 Islam does not permit, under any circumstances, the massacre of innocent citizens, terroristic explosions and suicide bombings. The continuous carnage and slaughtering of people, suicide bombings against innocent and peaceful communities, explosions at mosques, shrines, educational institutions and businesses; the destruction of government institutions, buildings, trade centers; attacks on defense training centers, embassies, transports systems and other institutions of civil society; all these acts are grave violations of human rights and constitute kufr, disbelief, under Islamic law. The founder and patron in chief of Minhaj-ul-Quran International, and Chairman of Pakistan Awami Tehreek, Shaykh-ul-Islam, Dr Muhammad Tahir-ul-Qadri issued his detailed edict (fatwa) today, consisting of 200 pages, while addressing a press video conference from Canada.

Describing the background of his edict he said a terrible wave of terrorism has been maligning Pakistan in particular, and Muslim and non-Muslim nations in general, for the last many years. There is no doubt that, while Muslims as a collective entity condemn, resist and fight terrorism, and do not accept even its remotest possible link with Islam, unfortunately there are some people who remain quiet on the issue, silence taken as a tacit approval of such atrocities. Indeed there are others, who, instead of opposing and condemning terrorism openly, confuse the issue, merely concentrating upon the politics that cause these atrocities.

Dr. Qadri appealed to all Muslim scholars, intellectuals, and opinion-makers not to concentrate on who these people are, who is behind them and why they are committing these acts. Whatever justifications they may give for their actions, they act against the teachings of Islam. They are in clear contravention of what Islam stands for. Their each action is premised on bringing harm to Islam and to the whole of humankind. Their existence is an open danger against the integrity of Pakistan and world peace. The entire nation should dissociate itself from these elements, and condemn them in the strongest possible terms, unequivocally and with one voice. The Pakistani nation is in a state of war. It is the need of the time for Pakistan to form unity among its ranks at every level. The entire nation should stand behind their armed forces busy fighting a war for the protection of the lives of the innocent citizens, and securing national defense by eradicating terrorism. 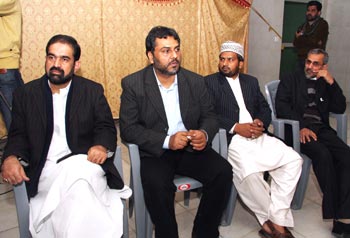 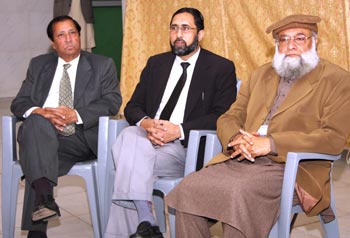 Those who commit these atrocities claim they are doing so for the preservation of Islam and Muslims. They claim their heinous acts constitute ‘jihad’, and thus, those who join in their misguided cause will enter paradise. They justify the killing of innocent civilians by misinterpreting Islam and brainwashing susceptible and often vulnerable individuals. Dr. Qadri argued it is thus imperative to make Islam's stance on terrorism precisely evident in the light of the Quran and Sunnah so that the Muslims as well as non-Muslims of the world do not suffer from any misunderstanding and ambiguity.

He explained at length, in the light of the Quranic verses, Prophetic traditions, and expositions by eminent Islamic authorities of faith and jurisprudence that perpetrating terrorism against innocent citizens, massacres of humankind, suicide bombings, the destruction of national assets and property is absolutely against Islam; it amounts to an ‘act of kufr’. Islam does not permit such acts under any excuse, reason or pretext. Moreover, Islamic teachings do not allow any group of people to take up arms, and wage war against the state and challenge its written authority. This is sheer mischief-mongering and civil war. Islamic law regards it rebellion and insurgency. He clarified that even if Muslims, living within a state, are being persecuted at the hands of foreign non-Muslim powers, and the Muslim government remains silent over such persecution, even then no individual or group of individuals is allowed to take the law into their own hands. Instead, one should use democratic means of protest and peaceful ways of resolution should be adopted. 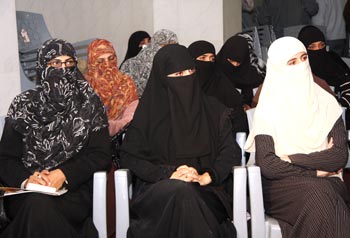 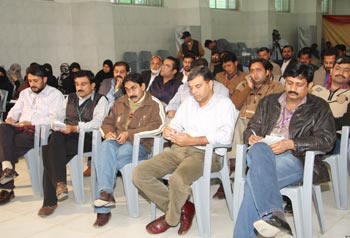 Citing various Quranic verses, Prophetic traditions, sayings of the Companions, and renowned jurists and scholars of Hadith, Dr. Qadri made it clear that even in a state of war, and during warfare, Islam strictly prohibits the killing of peaceful citizens, women, children, the sick and the old. Moreover, during a battle, it is unlawful in Islam to destroy trees, crops, buildings and places of worship of any faith.

Dr. Qadri said the first ever ‘war against terror’ in Islamic history occurred during the Caliphate of Sayyidina Ali (r.a). The Khawarij and Harooria were a rebellious group of people and the first militant terrorists. They rejected Sayyidina Ali’s (r.a) policy of dialogue, arbitration and peaceful means of dispute resolution. They were in favor of resolution through armed conflict. They used Islamic slogans of Jihad and rebelled against the state, and justified human killings according to their extremist theology. The Khawarij committed acts of terrorism whilst citing Divine law in their defense, arguing they were acting for the dominance of Islam. However, the Holy Prophet (saw) had already identified the Khawarij in more than fifty Prophetic traditions. He (saw) stated they were outside the ambit of Islam, had no legitimate authority to declare jihad, and instead, were the worst of humankind. Sayyidina Ali (r.a), with his army, himself fought against them in order to stop their atrocities, and eradicated the Kharijite terrorism.

Dr Qadri’s detailed religious edict consists of 200 pages, and clarifies his point of view in the light of dozens of verses from the Holy Quran, Prophetic traditions, countless commentaries of Muslim jurists, etc. This religious edict is in the process of publication, and will be available in the form of a book in Arabic, Urdu and English, later this week.