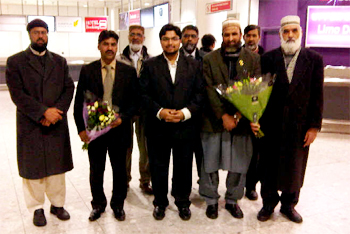 Sahibzada Hussain Mohi-ud-Din Qadri, president of Minhaj-ul-Quran Federal Council, reached London on his tour of England. A large number of workers and leaders of MQI received him at the airport. Sahibzada Hussain Mohi-ud-Din Qadri started his organizational tour by presiding over a meeting of MQI UK, attended by the office-bearers. Addressing on the occasion, he said that terrorism was fast extending its tentacles across the world including Pakistan. The government of Pakistan needed to come up with effective strategy to provide security to people at every cost through an integrated anti-terror approach. He said that if the present trends of terrorism were not reversed, they would further cripple the fledgling Pakistani economy. "In these circumstances, both foreign and local investors would hesitate investing their capital and the country would not progress economically without this investment." he added.

He said that though media and judiciary claimed independence, yet both of these entities had to keep the 'doctrine of necessity' in view before going ahead with their policies. However, he said that despite these constraints, the present direction of media and judiciary boded well for the future of the country. He asked the other institutions to develop mechanisms for self accountability and reorient their working in the direction of contributing to the wellbeing of the state and society.

Hussain Mohi-ud-Din Qadri said that the judicial verdict on the NRO should not be allowed to be put in the cold storage. The government is constitutionally duty bound to implement the December 16 order of the Supreme Court in letter and spirit without further delay. Emphasizing the need for across the board accountability, he said that the government should give general amnesty under the reconciliation process if people brought back their looted money and handed it over to the national exchequer. He said that MQI under Shaykh-ul-Islam Dr Muhammad Tahir-ul-Qadri was making strenuous efforts to project the Islamic message of peace and harmony in the world. He said that efforts were being made to get in touch with the policy-making institutions and think tanks of the European countries in that regard.

Hussain Mohi-ud-Din Qadri told that he would deliver speeches on Islam and Human Rights in four important universities of UK during his visit besides visiting the Department of Muslim-Christian Studies in the Oxford University. He hoped that these lectures would play important role in developing understanding among followers of different religions and bringing them closer to one another.