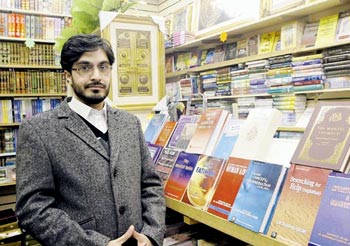 LONDON. Minhaj-ul-Quran international UK (MQI UK) has said that it has welcomed the Government’s plan to ban the extremist organisation Al Minhajiroun and also to stop the Wootton Bassett march.

MQI UK spokesman Shahid Mursaleen said that “We have always supported the idea of banning extreme individuals and extremist groups from working in this country and have for a very long time been frustrated that they have been allowed to infiltrate universities and mosques to promote a message of hatred with their anti-west agendas.”

Shahid Mursaleen added that “for too long a small group of extremists are trying to hijack Islam and British Muslims and also hopes that the implication of this ban will be that moderate Muslim organisations such as Minhaj-ul-Quran UK which convey a peaceful, tolerant and moderate message of Islam will be supported and assisted by the government in order to tackle this new wave of growing extremism in British Universities.”

He further added that “Radicalism which leads towards terrorism is like a cancer within the body of Muslims worldwide and the majority of Muslims do not want it to be part of their body.”

Senior MQI UK advisor, Mrs Samra Yasmin Qadri said that “with the support of the government, moderate Islamic organisations can work effectively on all levels in society in order to create integrated law-abiding, respectful, peaceful and moderate Muslims and Muslim communities in the UK.”

Senior Minhaj-ul-Quran International leader Mr Hussain Mohi-ud-Din Qadri, who is currently on his UK lecture tour said that "We need to prepare the younger generation mentally and academically, intellectually and spiritually against extremist tendencies and radical and terrorist attitudes."

Minhaj-ul-Quran International UK has arranged a seminar at the Houses of Parliament for Tuesday, 12 January to discuss the reasons why extremist and radical elements exist in Britain and how we can tackle it in which Mr Hussain Mohi-ud-Din Qadri, Dr Raheeq Abbasi, Prof Jeffery Haynes, Dr Waqar Azmi and Shahid Malik (UK Minister for Communities) will speak.

MQI UK is also holding an anti-radicalism conference at Queen Mary, University of London to discuss the Islamic Political System, Democracy, Freedom of speech and growing Radicalism in Britain. Mr Hussain Mohi-ud-Din Qadri, who is the son of the prominent scholar Dr Tahir-ul-Qadri, will be speaking at the conference along with Minhaj-ul-Quran International Secretary General Dr Raheeq Abbasi"

MQI UK's Response to the March in Wootton Bassett

LONDON. Minhaj-ul-Quran International UK (MQI UK) has expressed deep concern over the announcement by an extremist group to hold a march at Wooton Basset. MQI UK's spokesperson Shahid Mursaleen said that this group is known to consist of members who are known extremists and trouble makers including their leader Anjem Choudary.

"We strongly condemns the announcement by an extremist group to go ahead with the planned march at Wootton Bassett. Minhaj-ul-Quran pays tribute to the dead British soldiers, " he said.

“Extremists like these always claim to speak for Islam and British Muslims yet they are not qualified to do either. These kinds of extremists do not represent the British Muslims” He added that “This march will achieve nothing other than to incite hate crime against innocent law abiding British Muslims.”

He said that this march should not be allowed to take place and it defies belief that a group that is supposed to be banned can operate by just changing its name.

“It must be remembered that a protest by a handful of extremists at a home coming parade in Luton lead to violent demonstrations being held by the right-wing English Defence League across the UK which targeted all innocent law abiding Muslims. If the government and police do not act to stop this protest and curtail this group then there will be similar backlashes against British Muslims.”

“Minhaj-ul-Quran International UK has arranged a seminar at the Houses of Parliament for next week to discuss the reasons why extremist and radical elements exist in Britain and how we can tackle it.”

"We have also launched a series of lectures for British youth 'Islamic Perspectives Series 2010' at Queen Mary, University of London by Hussain Mohi-ud-Din Qadri to explore ways in tackling radical ideologies and groups such as Islam4UK."